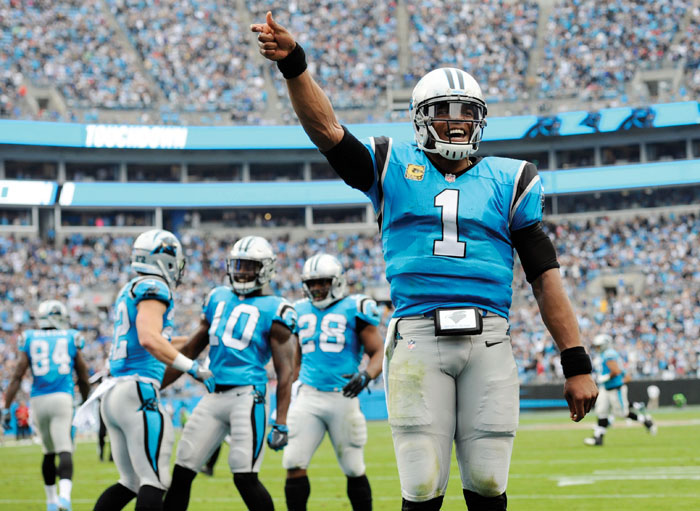 FILE - In this Sunday, Nov. 5, 2017, file photo, Carolina Panthers' Cam Newton (1) celebrates a touchdown against the Atlanta Falcons during the first half of an NFL football game in Charlotte, N.C. The Panthers are gaining momentum behind the league’s No. 1-ranked defense and will look to make it three in a row entering Monday night’s game against the Miami Dolphins. (AP Photo/Mike McCarn, File)

CHARLOTTE (AP) — Cam Newton says this season is starting to have that “kind of special feeling feel” to it again.

The Panthers (6-3) are gaining momentum behind the league’s No. 1-ranked defense entering Monday night’s game against the Miami Dolphins.

“I just like the way that this team is forming together, especially what’s been happening in recent weeks or whatever,” Newton said. “This team has not been disconnected. We came together.”

The Panthers should get a big boost when tight end Greg Olsen returns from a broken foot after next week’s bye.

And if Newton and the offense can develop some consistency and the defense can begin forcing turnovers — they only have eight so far this season — the Panthers could be a dangerous team down the stretch.

Carolina’s offense has gone through some ups and downs playing the past seven games without Olsen and dealing with the trade of No. 1 wide receiver Kelvin Benjamin to Buffalo.

“We’re still striving, knowing that we haven’t played our best brand of football yet,” Newton said.

The same “kind of special feeling feel” can’t be applied to the Dolphins season so far.

Miami lost starting quarterback Ryan Tannehill for the season in training camp, had its offensive line coach resign over an incident where he was videotaped snorting a white powdery substance, and traded running back Jay Ajayi in what has been a drama-filled season.

Still, the Dolphins (4-4) are alive in the AFC despite back-to-back losses to Baltimore and Oakland.

STEWART’S ROLE: It will be interesting to see how the Panthers use running back Jonathan Stewart after the 10-year veteran turned the ball over twice on fumbles last week against the Falcons. Stewart saw his role diminish late in the game as the Panthers turned to rookie Christian McCaffrey, who ran for a career-high 66 yards.

HABIT OF TRAILING: The Dolphins haven’t had a lead entering the fourth quarter all season, which has hampered their pass rush, coach Adam Gase said.

The front four includes Ndamukong Suh and Cameron Wake and is considered the team’s strength, but the Dolphins are only tied for 23rd in the NFL with 16 sacks.

“I’d love for us to lead one of these times,” Gase said. “I just want to see us one time with a lead late in the third quarter and going into the fourth quarter, and watch those guys go to work. We haven’t given them that opportunity. The offense has really taken it personally that we haven’t done that yet.”

RECEIVING BACKS: Panthers linebacker Thomas Davis complimented the Dolphins running back tandem of Damien Williams and Kenyan Drake this week, saying they certainly “look the part.” Williams and Drake have seen increased roles after the team traded Ajayi to the Eagles.

Jay Cutler completed all 12 throws to his running backs against Oakland — something Davis said the Panthers must key on this week. “For us as a defense we understand that they are getting the ball to their backs,” Davis said.

The 6-6, 260-pound Newton can be a nightmare in the open field, but the 6-4, 305-pound Suh doesn’t figure the Panthers quarterback will try to steamroll him.

“Cam is a little bit different,” Suh said. “He feels he can overpower through most tackles, especially when he sees little guys. But I have noticed when he’s going against bigger guys, he’s going to shy away a little bit.”

Newton has led the Panthers in rushing in each of the past four games.

TAKEAWAY TIME: The Panthers have four takeaways in the past two games — something middle linebacker Luke Kuechly hopes is the beginning of a trend.

“I don’t know what is going on, but we just haven’t been able to get the ball out as much,” Kuechly said. “… Sometimes the ball finds you and sometimes we have to keep punching at the ball, holding guys up and keep trying to rip that ball out.”