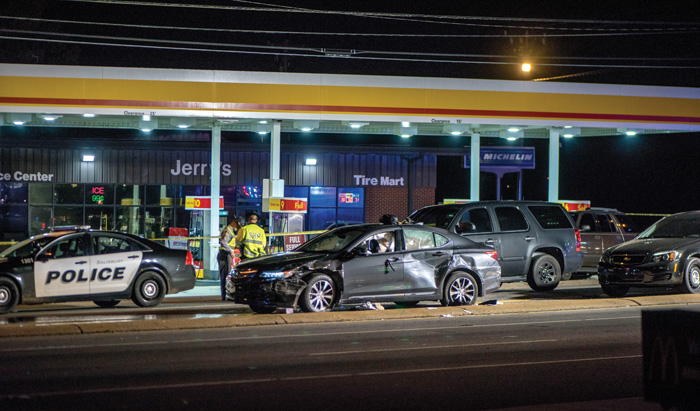 JON C. LAKEY / SALISBURY POST A suspected bank robber is dead after a brief chase with Salisbury Police that ended on Jake Alexander Blvd. near the Mooresville Road on Thursday evening. The Wells Fargo Bank on the corner of Jake Alexander and Brenner Ave was and active crime scene for several hours. Thursday, November 9, 2017, in Salisbury, N.C.

SALISBURY — As details continue to unfold following a bank robbery, high-speed chase and subsequent shooting of the suspect, witnesses are coming forward to recount what happened.

The mayhem occurred Thursday around 5 p.m. when Salisbury Police received information regarding a bank robbery in place at Wells Fargo, 866 W. Jake Alexander Blvd. While police were en route they received additional information that a bank customer had been shot.

It’s believed that the suspect, who department reports suggest is Paul Jones III, 25, of Charlotte, carjacked someone whom he then shot. The two people who it is believed the suspect shot do not have life-threatening injuries.

The suspect, driving the stolen Acura, struck another vehicle in the rear and then came to a stop in front of Jerry’s Shell gas station.

Rodney Fortner, who witnessed the shooting, described the “horrifying” events as he sat in his vehicle stuck in traffic beside the getaway car.

Fortner was on the phone with his wife with the intention of going to get something to eat at Taco Bell. He saw the multiple police cars descend upon the area. Fortner said he saw the Acura strike a vehicle and even told his wife he thought he was about to be in the middle of an accident.

He said he saw police immediately surround the vehicle, then an officer tapped on the window and Fortner heard a “pop, pop.”

Fortner said the airbags in the Acura deploy, obstructing his view of the driver, but he clearly heard what he knew as gunfire. He saw the officers step back and then step forward and return fire on the car.

The whole time his wife was screaming hysterically on the phone and Fortner said he was trying to get out of harm’s way. He was blocked in by traffic but was eventually able to move and drove home.

“It was horrifying. There were shots that came from the car before they shot,” he said of police.

When the shooting stopped, Fortner was able to move his car around the scene and he left.

“I never even saw the person who was in the car. I didn’t see anything in the car,” he said.

The Post spoke with Terry Johnson following the Thursday shooting incident. He said he saw the accident take place. Johnson also heard two shots and then multiple shots from police.