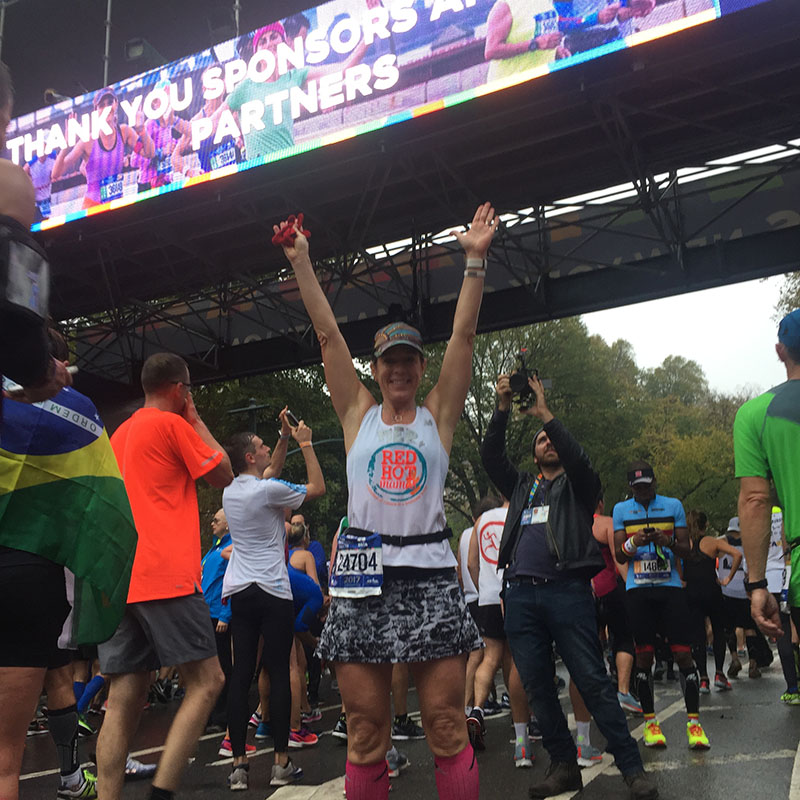 Meredith Abramson celebrates her finish at the New York City Marathon on Sunday, November 5th. She took pictures and visited with friends along the 26.2 mile course. Submitted photo

Nearly 100,000 runners applied through a lottery system that tries to allow runners from all regions of the United States and most foreign countries to toe the starting line. The marathon has grown from 55 finishers in 1970 to the largest in the world.

“I was ready to run a big marathon again, and was doing it for a bucket-list experience,” said Lowman, a math instructor at Rowan-Cabarrus Community College. “Because I ran Boston in 2013, the year of the bombing, I was a little nervous going to New York but never considered not going.”

Running her “comeback” marathon after none for almost four years, Abramson said, “I had both knees scoped in 2014 and the recovery took far longer than I could have imagined. Getting into this race was really special and I wasn’t sure that I could pull it off.”

Abramson’s traveling partner was 51-year-old Suzanne Burgess, assistant financial director for Cabarrus County. Burgess told a story of how her first ever marathon came to be.

“One summer morning, I was doing some track training at Catawba and one of the security guards asked me if I was training for a marathon,” Burgess said. “I told him I was not. He said that I had to run New York.”

That security guard was Rick Thibodeau, a veteran runner and marathoner. Burgess applied the next year and was not successful but did make it this year, adding, “Lucky me, I got in.”

Chris Blumenthal, a 49 -year-old category analyst at Food Lion’s corporate office,  completed his 16th marathon. He ran with his friend Kenneth Todd, also from Salisbury. Todd has completed marathons in 35 states for a total of 45 overall, yet he recounts New York as “an experience like no other.”

Noelle Redding is a 33-year-old dental hygienist and just completed her second marathon. “When Kelly qualified for the marathon, I sent my entry and was surprised to be accepted in the lottery,” Redding said. “Running through the five boroughs was so motivating and energizing and was unlike anything that I have ever experienced.”

Redding and Lowman had a disconcerting incident when they walked into the athlete’s village. Each wave started with a cannon and neither knew it. “The first time the cannon fired, it scared us to death, Redding said. “We thought something exploded until a security guard told us that is how they started the race.”

The runners all had opinions on what made the world-class marathon so enjoyable.

Like Lowman, Abramson had run Boston and they both had a pretty good yardstick for a major marathon.

“The expo was amazing,” Lowman said. “So much to see, so many shoes to try on. As far as the marathon, I have never run with headphones but you certainly don’t need them with all music and cheering on the course. I enjoyed running in all five boroughs. I have been to New York several times but now I can say that I have been all over New York. Being in Wave 1, I got to see both the elite women and men start.”

The crowd and the city’s effort impressed Abramson.

“There is a tolerance and respect from those in the running community and those in the city and one would have to be oblivious not to have seen this,” she said. “I thought about what it took to orchestrate this event and was amazed at what New York did to keep people safe. Security was everywhere. I felt safe and supported in a city that epitomizes strength.”

“This was my first marathon but I can’t imagine other marathons being more exciting than New York,” she said. “The cheers from the crowd, the miles of music, the bands and the volunteers were all worth every training mile.

“My favorite part was giving high-fives to every man, woman and child who put their hand out. Complete strangers yelled out my name that was taped to my shirt. Small children gave me Coca-Cola and pretzels at Mile 21. I saw my daughter, Allie, at Mile 18, 23 and the finish.”

“The treatment that we got from all New Yorkers when we told them that we were running the marathon was amazing,” Blumenthal said. “We heard lots of good lucks and congratulations. My favorite was watching the crowds and their enthusiasm for all runners. The spectators in Harlem, the Bronx and Manhattan remained for five or six hours.

“There was a misting rain for a fair part of the race, great to run in, but I can’t imagine the crowd wanting to be out there so long but they did. Another highlight was the race director actually greeting Ken and me at the finish line.”

All the runners report that their sore legs are healing well and they have other races in the future but count this race as the best yet.

“I feel so grateful to have finally found my spot in the NYC Marathon,”Abramson said. “I ran with a smile on my face for 26.2 full miles. Each borough had a different vibe, but the support and love were consistent from neighborhood to neighborhood.  In fact, I said out loud ‘this is incredible’ over and over.

“I encourage all runners to make the attempt to put their name in when the application period opens and just be patient.  You’ll find your spot when it is your turn, and then make the most of your journey.”