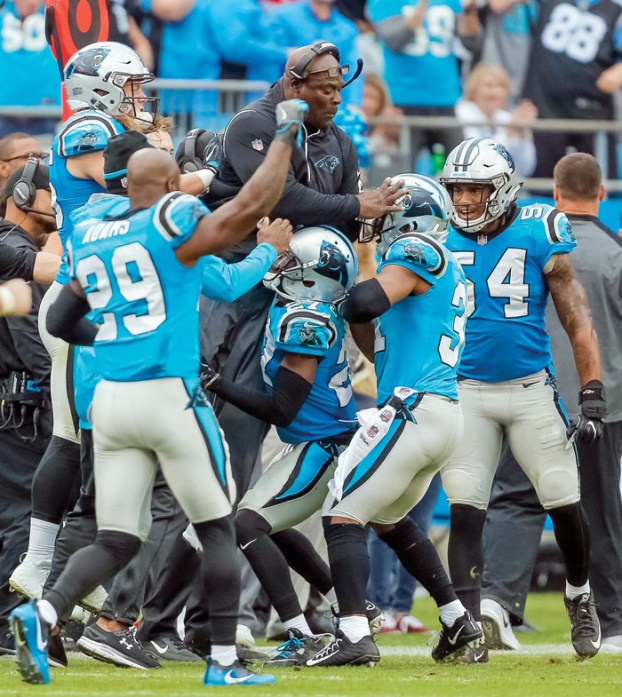 FILE - In this Sunday, Nov. 5, 2017, file photo, the Carolina Panthers defense celebrate by lifting assistant defensive backs/safeties coach Richard Rodgers along the sidelines after they stopped the Atlanta Falcons on fourth down in the second half of an NFL football game in Charlotte, N.C. The Panthers have always been a strong defense under Ron Rivera, but they're back to be being No. 1 behind the help of some veteran players. (AP Photo/Bob Leverone, File)

CHARLOTTE (AP) — Julius Peppers said prior to the season he felt like the Carolina Panthers had the potential to be the NFL’s No. 1 defense.

Now that they’ve reached that pinnacle, the Panthers want more.

Carolina’s veteran-laden defense is allowing a league-best 274.1 yards per game, but players and coaches alike say there is plenty of room for improvement — most notably, they want to create more turnovers.

The Panthers (6-3) only have eight takeaways in their first nine games entering Monday night against the Miami Dolphins. That’s tied for 26th in the league, and well behind the league-leading Ravens, which have forced 18 turnovers.

“They are doing pretty good right now, but we’re not taking the ball away like we are capable of doing,” Panthers coach Ron Rivera said. “Just imagine if we could do that.”

The Panthers have started to turn that around.

They have four takeaways in the last four games, including three in a win two weeks ago at Tampa Bay.

Panthers cornerback Captain Munnerlyn said it’s nice to be ranked No. 1 in the league, but quickly added “we still have work to do and we’re not close to where we need to be.”

Munnerlyn insists the takeaways will come at some point, but also wants to see the Panthers eliminate some of the big plays they’ve surrendered.

On two occasions Sunday the Panthers allowed Falcons wide receiver Julio Jones to get behind the defense. However, the Panthers got lucky as Matt Ryan overthrew the Jones on one pass, while Jones dropped another sure TD in the end zone.

Munnerlyn said he likes that Peppers told the team’s website in the offseason that the Panthers could have the No. 1 defense in the league. The Panthers are back on top, just as they were in Weeks 3, 4 and 10.

“We have some confident guys in this locker room who were willing to accept that challenge,” Munnerlyn said. “It was basically a challenge to us when he put it out like that.”

Munnerlyn would also like to see the defense be more consistent.

Although they’ve held four offenses without a touchdown this season, they also allowed the Saints to score 34 points, the Patriots 30, the Eagles 28 and the Lions 27.

Nonetheless, Carolina’s blueprint this offseason of filling holes in the defense with experienced veteran players has been a rousing success.

Sixteen-year NFL veteran Julius Peppers has 7 ½ sacks, 14-year veteran safety Mike Adams has made some huge plays and Munnerlyn, a 9-year pro, has shored up the nickel cornerback spot on a defense that was already loaded with experienced veteran players like Charles Johnson, Thomas Davis, Mario Addison and Luke Kuechly.

Carolina’s 11 starting defensive players have played in a combined 999 NFL games — and that doesn’t even include defensive Julius Peppers (243 games) and cornerback Captain Munnerlyn (133 games), who come off the bench.

Panthers first-year defensive coordinator Steve Wilks said there is a tremendous “trust factor” among players on the defense.

Wilks has an aggressive style of play calling and the Panthers are blitzing more than they have at any point under former defensive coordinator Sean McDermott.

He said the defense is playing with “swag” right now, but insists he’s not focused on the team’s No. 1 ranking.

“I don’t really get caught up in the numbers,” Wilks said. “We’re number one right now. We have a lot of football to play. I’ve said this before — this defense is not where it wants to be. We are going to enjoy the season when the season is over.  Stay focused on being focused.”