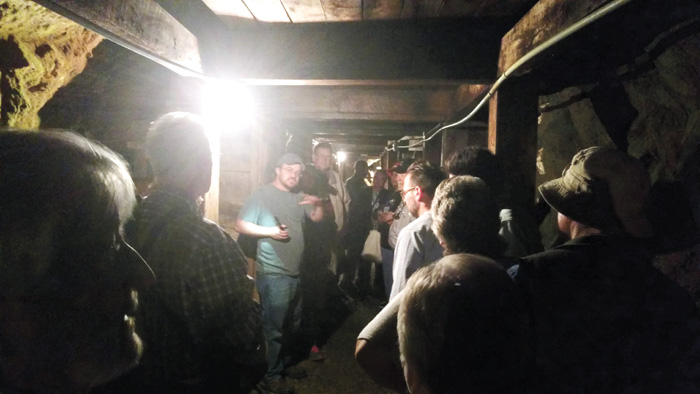 SALISBURY — Vern Herman, who is Cornish only by marriage, knows the saying nonetheless.

“If there’s a hole in the ground,” he said, “you’ll find a Cornishman at the bottom.”

So it was only fitting that the 18th Gathering of the Cornish Cousins would come to Salisbury this weekend and focus on this region’s mining history, which in Gold Hill especially, became tied closely to Cornish engineers and miners.

“It’s a whole region of Cornish history we knew nothing about,” said Kathryn Herman, president of the Cornish American Heritage Society, which tries to conduct these “gatherings” about every two years. “This has been a real revelation to us.”

This year, 50 participants in the society came from 15 different states and also included three people from Cornwall, England. They started their activities Friday morning and wound up this convention of sorts with a pasty dinner gala Saturday night at the F&M Trolley Barn.

In between, they toured the Reed Gold Mine state historic site in Cabarrus County Friday afternoon and the Gold Hill Historic Village and its mining district park Saturday afternoon. They also heard talks from Vivian Hopkins and Steve Poteat on local mining history.

In addition, two authorities on the engineering aspects of mine pumps — Mark Connar of Lehigh Valley, Pennsylvania, and Damian Nance of Ohio State University — spoke Saturday morning on the topic “Cornish Pumps and the President Pump.”

As Kathryn Herman noted, Cornish mining pumps are in use around the world.

It’s estimated that about two million people of Cornish descent live in the United States.

The Gathering happens about every two years in different parts of the country. A 2014 Gathering took place in Milwaukee, Wisconsin. Others have occurred in Upper Michigan and California.

The 2019 Gathering is already scheduled for Mineral Point, Wisconsin.

Cornish miners, engineers, their equipment and ingenuity spread across the United States wherever news of mining opportunities were reported. One of those places in the 19th century was Gold Hill.

Kathryn Herman, who lives in Wisconsin, said many of the Cornish immigrants came to the United States between 1890 and 1910 when tin began to run out in Cornwall. Her own grandfather immigrated to northern Michigan in 1892.

Herman described the Cornish people as hard working, “very family oriented and superstitious.” “They were real pioneers in coming to America,” she added. “Part of it was desperation.”

When conditions in Cornwall became dire, there often was a “pull of golden opportunity” in the States, Herman said.

David Downing, attending the Gathering from St. Paul. Minnesota, said his Cornish great-grandfather followed a path that took him to Wisconsin, Iowa and finally Minnesota by 1920. He had been one of five brothers who came from Cornwall to North America.

“It’s a theme all over the world,” Downing said. Wherever there was mining, you were likely to see men from Cornwall.

Hopkins, who often speaks on Gold Hill’s mining history, gave the Cornish American group an overview Saturday morning, after the society held a brief business meeting at the Trolley Barn.

By acclamation, the group selected Carolyn Haines of Michigan as its next president, and Haines said she will do her best to  promote all things Cornish and keep Cornish American heritage strong.

Her son, Christopher, also will be striving to give the Cornish American Heritage Society a stronger presence on social media.

Sarah Jackson of Gaithersburg, Maryland, was chosen as the group’s next treasurer.

Gold was first discovered in what became Gold Hill in 1824 on the farm of Andrew Troutman.

By 1842, the Barnhardt mine shaft in Gold Hill went 435 feet underground. The Randolph Shaft in 1843 would go 850 feet down. Between those two mines alone, an estimated $7 million to $9 million was mined before the California gold strike in 1849.

In 1855, the mayor of Charlotte famously said he hoped his town could be as big and prosperous some day as Gold Hill. The rowdy mining town had many merchants, 26 saloons, six brothels, a blacksmith, wheelwright and doctor. Before the Civil War, 30 to 40 percent of the gold minted in the South came from Gold Hill.

But the war ended all mining operations. A resurgence came by the 1880s, represented by the New Gold Hill Ltd. Mining Co. based in London and with investors from Cornwall. The company bought all the holdings in Gold Hill and produced gold for 20 more years at healthy profits.

Copper and silver also were mined in Gold Hill. At one point the Gold Hill mining district had 24 different mines.

“The gold didn’t play out,” Hopkins said. “It just got harder to get to.” But the Gold Hill mines ceased production in 1915.

In 1857, Harper’s Weekly magazine sent a writer and illustrator to do a story on Gold Hill and its “newly developed class dynamics of mining operations,” according to a thesis excerpt by Jason Linwood Hauser.

One of the men who showed the writer and illustrator around was Matthew Moyle,  “a handsome Cornishman.”

Hauser said Cornish miners lent a work ethic that contrasted sharply with many of the natives.

Richard Knapp, in his history of mining in North Carolina, described the Cornish miners as superstitious, clannish and Methodist. They rarely drank alcohol and preferred to keep company with their families.

The historians say Cornish immigrants found the infrastructure of deep vein operations such as those in Gold Hill dangerous. The Cornish were deep miners by training. They knew how to shore up shafts and were better at blasting.

He never was given to swearing or drinking
Yet got all his money by damming and sinking;
He buried himself below all his life,
And when dead he was buried up here by his wife.