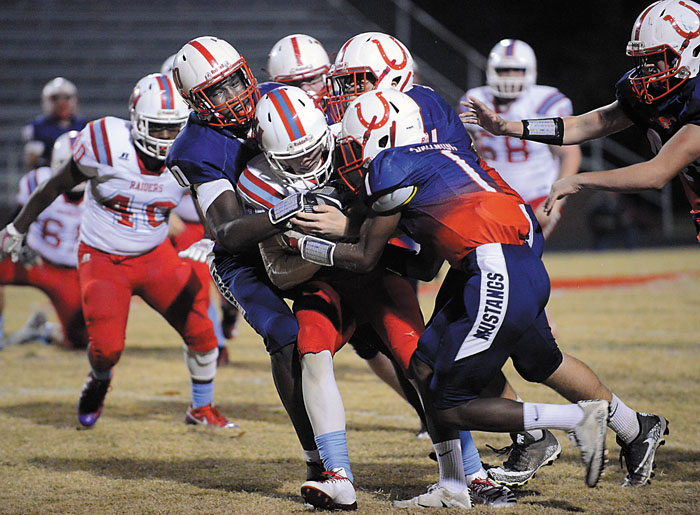 GRANITE QUARRY—For two teams battling to stay out of the cellar in the North Piedmont Conference, East Rowan and North Iredell put on quite a show Friday night at the Mustangs’ stadium.

A big defensive stand in the fourth quarter followed by a time consuming touchdown drive enabled the Mustangs (3-8, 1-4 NPC) to hold off the Raiders, 37-28, on Senior Night.

On a night punctuated by some remarkable individual performances on both sides, East was able to overcome a 306-yard aerial assault by the visiting Raiders and snap a frustrating seven game losing streak to end its season on a positive note.

Winless North Iredell (0-10, 0-5 NPC) has now lost 25 in a row over three seasons but still managed to dazzle the Mustang defense on some big play touchdowns as senior quarterback Jeshua Bunton passed for 306 yards and three TDs, all to fleet-footed senior wide receiver John Menscer.  Bunton hit Menscer for a 68-yard bomb in the first quarter then found him for 75 yards and 65 yards in the second half to keep the Raiders in the game.

But the Mustangs had some impressive weapons of their own as halfback Sam Wall used his superior speed to rush for 145 yards and one score, giving him 1200 yards on the ground for his junior season. It was also a coming of age night for East sophomore quarterback Logan Forbis who had his best game of his first varsity season with 133 yards passing and three TD tosses. Two of those aerials went to Wall for scores covering 61 yards to open the game and 26 yards to seal the game in the fourth quarter.

“I have gotten a lot better as the season went along,” said Forbis, who started the year on the Jayvee squad. “Moving up to the varsity and getting that experience really made me a lot better.”

Mustang coach John Fitz felt his young signal caller had to endure a trial by fire this season and came through. “For Forbis to be a jayvee at the start of the year then to come out and do what he has done is pretty amazing.” Fitz said. “He did a great job tonight when it mattered.”

East actually trailed the Raiders, 7-6, after one quarter but seemed to take control by halftime, 21-7, as senior Noah Green punched in a 1-yard run as part of an impressive, 29-carry, 91-yard night.  Forbis then hit receiver Gabe Hinceman on a 16-yard scoring pass just before intermission.

But the Raiders showed they were not ready to fold as they marched 86 yards on a strange drive that included a 56-yard pass play that North’s Donya’ Stevenson snagged on a double deflection to reach the East 15-yard line. Four plays later, Stevenson scored from the 1-yard line to cut the deficit to 21-14. East responded with the speed of Wall once again as he took a pitch and raced 43 yards to expand the lead back to 28-14 midway in the third period.

“My blocker did the job for me tonight and I got what they gave me,” Wall said in his typical modest fashion. “I just hit the holes as hard as I could and it worked out.”

But North Iredell was not finished yet, however, as Bunton found Menscer deep again for a 75-yard score to trim the East lead to 28-21. When East punted on the next series, the Raiders seemed poised to tie the game up as the third period came to a close. Some key runs by Stevenson and Bunton enabled North to reach the East 26 as the fourth quarter opened. But the Mustang defense rose to the occasion when it counted most.

First a pass from Bunton to Menscer in the end zone was batted away by  East’s Mustafa Davis on third down. Then on 4th and 4 at the 26, Bunton went for the first down on a keeper but found East’s 6-7, 210 pound defensive end in his way. Hooper stuffed Bunton two yards shy of the first down to preserve the lead.

“Our defense came through,” said Hooper, a junior basketball standout who is enjoying his first season of varsity football. “I figured somebody had to step up and do it on that play, so I guess I was that person.”

East followed the big defensive stop with a clock-eating 76 yard drive capped by a Forbis to Wall 26-yard TD pass with 6:42 left. The extra point missed to leave it at 34-21 and that could have been a haunting factor as Bunton and Menscer continued their aerial assault with a 65-yard connection to trim the lead to 34-28 with 5:37 left.

The Mustangs ignored the pressure and embarked on a methodical 60-yard drive that concluded with just 1:47 left and a clutch 18-yard field goal by Hinceman to go ahead 37-28, and effectively ice the game.

“Early on, I got a little concerned,” Fitz stated. “But in the second half, I thought we really stepped it up, especially on two occasions in the fourth quarter.  I am really proud of these kids and I am proud that our seniors get to go out on a win like that.”

NOTES: The game was marred by a rash of penalties especially against the Raiders, who committed 13 for 107 yards and had at least three others that were declined. East was flagged for nine penalties and 90 yards included three 15-yarders in the second half.

Young comes back to lead Statesville past West Rowan,…