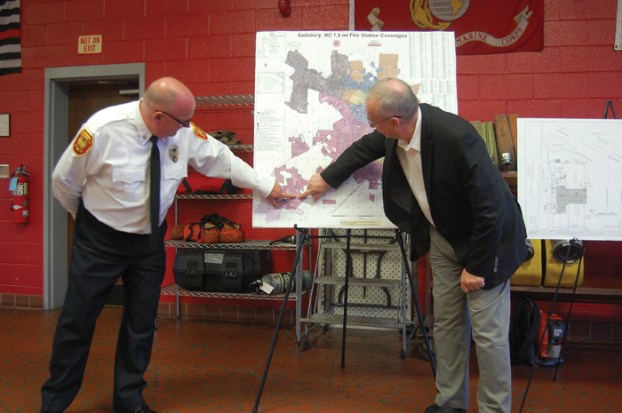 SALISBURY — As administrator for Liberty Commons Nursing and Rehabilitation Center, Patrick Foley said he is excited by the idea of having a fire station one minute away from the facility.

The fire station that currently serves his center — Fire Station 2 — is nearly two miles away.

“It’s going to be tremendous for our staff, our families, our residents, providing more safety for our facility,” Foley said Wednesday evening during an open house to provide information about the new station.

Foley said that beyond what it would do for his own workplace, having a fire station in an area that has a chemical plant, train station and airport nearby will be good.

“You never know what type of disaster could happen. And you’ve got three major disasters right there, with the airport, the chemical plant and the train station. There’s a need for an emergency response system so close,” Foley said.

Salisbury Fire Chief Bob Parnell said his department decided to host the open house at Fire Station 2, at 2312 S. Main St., in part to show residents how far the station is from their neighborhoods.

“This is our closest facility to what is District 6, the southernmost part of our city,” Parnell said. “And we have measured distances and travel times that are in excess of nine minutes from here to parts of the areas that we protect on the south side of the Mid-Carolina Airport.”

Parnell referred to a chart that the department put together that detailed the response-time difference between Fire Stations 2 and 6 when going to places in the southernmost part of the city.

Parnell said that if Fire Station 6 is built, it could improve response times by five or six minutes for those places.

“That’s a long time if you have an emergency and you have to wait for services,” Parnell said.

Kaye Brown Hirst, who lives in the Kings Forest neighborhood, attested to that during the comment portion of the meeting.

Hirst said that in May 2016, she had to give her late husband CPR for nine minutes before emergency services could reach her home.

“It would have been easier if it had been four or five minutes,” Hirst said. “It seemed like an eternity that night.”

Hirst, who has lived in Kings Forest for 40 years, said she has noticed both residential and industrial growth in the area.

“So I think (the station) is much needed, and I’m very happy about it,” Hirst said.

Parnell said that members of the Fire Department went along for the city’s weekly community engagement walk Friday in the Forest Hills neighborhood in order to connect with their potential neighbors and advertise the open house.

“And many residents gave us feedback, ‘We’re really looking forward to seeing the fire station.’ So there is a lot of support to have responses that are acceptable and within reason,” Parnell said.

Should it be built, Fire Station 6 would be 21,400 square feet and would have a training area that station architect Bill Burgin said would be “the main … but not the only” training facility for firefighters.

The city has already purchased the land for the fire station — 6 acres at 310 Cedar Springs Road, just west of U.S. 29.

The issue of whether to rezone the land to allow the fire station to be built there will likely come before the City Council at its Nov. 21 meeting.

The Planning Board voted unanimously on Oct. 24 to recommend that that City Council approve the rezoning.

Children and parents flocked to the Downtown Halloween FunFest outside City Hall in downtown Salisbury. There were plenty of games,... read more