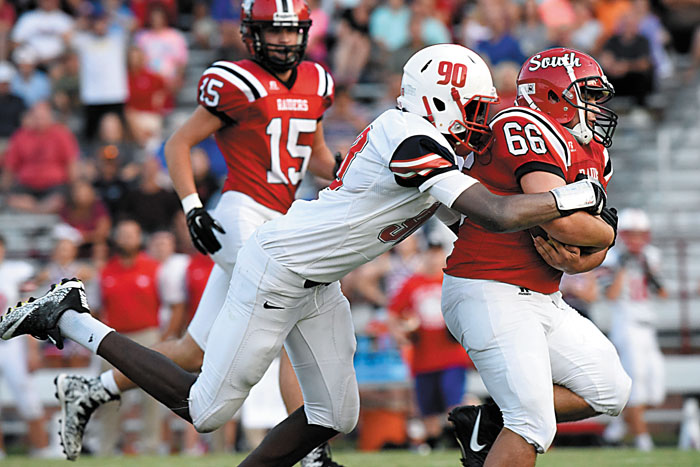 In football terms, a  pancake block is one that leaves a defensive player flat on his back as the running back goes through the hole. It represents a dominating victory by the blocker.

Five pancakes in one night is considered a truly awesome achievement, so the 20-plus claimed by the 5-foot-5, 205-pound Byrd during South’s 28-17 Senior Night win against Central Davidson probably should have earned him a guest appearance on “Good Morning America.”

South head coach Daniel Yow wasn’t exactly sure how many pancakes Byrd accumulated. He didn’t refute or verify Byrd’s tally, so maybe he lost count, too. But he did offer the opinion that Byrd was the single most important Raider on Friday. Offensive coordinator Jarrod Smith quickly seconded that motion.

Byrd never claimed to be a run-of-the-mill guy. When you’re listed on the official roster as RB, C  — that’s part running back/part center — ordinary goes sailing right out the window.

“Byrd is an offensive lineman with the dream of playing running back,” said a smiling Yow, who once manned an o-line post for Catawba College. “First day every year, Byrd always heads to join the running backs as his position group. But every year he has always ended up, by necessity, back on the offensive line.”

Byrd, a thickly built, but surprisingly good athlete who also competes in wrestling and track and field, is OK with being versatile.

Byrd was thrilled when he was handed the No. 44 jersey at the start of his senior season. His goal had materialized. At least for a brief time, he was a back.

But injuries always seem to occur, and it wasn’t long before Byrd had to swap the 44 for No. 66. He was back on the line.

He’s played center or guard this season, while also helping out on the defensive side of the ball as a tackle.

South was looking to employ a new offensive wrinkle in Friday’s game, and so Byrd’s long-postponed dream became reality. There had to be surprise and concern from Central Davidson’s viewpoint when the burly guy wearing 66 lined up in the backfield. What in the world was going on?

“It’s not illegal for me to run the ball wearing that jersey number,”  Byrd said. “But I’m not an eligible receiver. Brett (Amburn) can’t throw it to me.”

Byrd got a chance to rumble right away.

“First play, I got 9 yards,” Byrd said with a measure of satisfaction. “Next play,  I ran it again, first down. O n our first touchdown (late first quarter), I had one of the blocks that opened it up.”

“Byrd runs low and he runs a lot faster than you think he’s going to be running,” Yow said.

In the second half, South controlled the ball and rallied from a 17-13 deficit. That’s when the Raiders pounded for the bulk of their 200 rushing yards. Running backs Demarcus Blackwell and Marquis Rhyne combined for 35 carries and split 152 rushing yards. There were a lot of crunching 5-yard, chain-moving, clock-chewing runs, with Byrd operating as a fullback and lead blocker. He’d guide Blackwell or Rhyne into the hole, and then he’d search for a linebacker to bowl over.

“Blackwell and Rhyne had a lot of success following Byrd,” Yow said.  “At least half our plays, maybe three out of four plays, were basic isolations with Byrd as the lead blocker. You run a play until the stop it. They didn’t stop it.”

It didn’t take long for Central Davidson to figure out that wherever Byrd lined up was a reliable tipoff to where the point of attack was going to be, but South employed deception that provided Byrd’s favorite play of the night.

“I could see them pointing at me and the gap where they thought we were coming, but then we ran a different play and I got to run the ball,” Byrd said.

Following Blackwell, Byrd traveled 12 yards before anyone touched him. For a guy who’s dreamed of being a running back for years, that’s a moment he’ll always savor.

“It was a really good feeling to win,” Byrd said. “Especially on Senior Night.”

NOTES: Yow said defensive end Mohammed Dolley had an exceptional game, while safety Christian Reynolds contributed his third and fourth interceptions. Linebacker Michael Sloop made 14 tackles. A staple of Central Davidson’s offense is a short pass into the flat. That’s where Sloop made a lot of stops. “They really like those little flat routes and Sloop was 1-on-1 with a receiver,” Yow said. “He either made the tackle or he turned the play back inside where he had help from his teammates. He didn’t win every battle, but he won a lot more than he lost.”