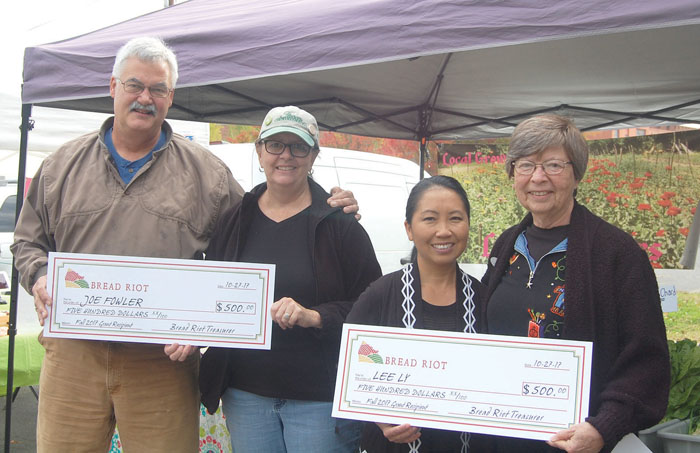 Joe Fowler, left, and Lee Ly, third from left, received $500 grants from Bread Riot through the Robertson Foundation. Next to Fowler is Bread Riot's Carol Corhan. Next to Ly is Dottie Hoy, a member of the Bread Riot board. Dierdre Parker Smith

SALISBURY — Two Rowan County farmers have received $500 grants thanks to Bread Riot and the Robertson Foundation.

Lee Ly, a regular at the Salisbury-Rowan Farmers Market, grows a variety of vegetables, herbs and flowers.

Joe Fowler, among other things, raises crocuses to harvest saffron.

Dottie Hoy of the Bread Riot board said it pitched in a little money to expand the grants beyond what the Robertson Foundation gave. “It has been an interesting process,” she said.

Jason Walser, director of the Robertson Foundation, said he is excited about how well the Farmers Market has been going. The foundation, he said, hopes the market will be part of proposed Bell Tower Green that will be developed in the 200 block of West Innes Street.

Part of the lot, at Fisher and Jackson streets, is the site of Farmers Market, which is open through Dec. 16 from 9 a.m. to noon Saturdays. Summer hours are 8 a.m.-noon.

The Bread Riot board helps support the Farmers Market and received 11 applications for the grants, then drew names from a hat.

Ly will use her grant for a woven cloth that will help reduce weeds under her flowers, especially the perennials she grows.

But it’s her crop of flowers that makes her booth at the market the most colorful one. Spring and summer are the high points of flower season, but some flowers are still available in fall.

Ly got an email from Bread Riot about the grant, so she sent in an application.

Ly and members of her family have been selling at the market since 2008.

“I would like to see more vendors, more people, but the market has been great. This year was a little slow, but I’m not more than 10 minutes’ drive from market, so it’s good for me.”

Fowler has a history of work in agriculture. He will use his grant for an irrigation system for the fall-blooming crocuses he grows for saffron.

He doesn’t have a farm but has used some of his land for the crocuses.

“The U.S. is by far the largest consumer of saffron, but the largest grower is Iran,” he said. “… Spain grows some nice saffron, too.”

Being a local producer gives him advantages and marketing opportunities. He can provide the harvest date of his saffron with each sale. “The stuff in the stores or online, you have no idea when it was harvested or how long it’s been sitting around.”

Fowler, a former wildlife officer and leader in the National Turkey Federation, looks for value-added products, so he’ll sell his saffron with a locally made mortar and pestle.

His other products are sweet potato butter and jalepeno butter. He sells mostly at shows and has been at the Southern Christmas Show in an area that promoted N.C. agriculture. That area is no more, so he’s getting ready to go to a Junior League show in Spartanburg, South Carolina. Some of his sweet potato butter is also sold in Harris Teeter and Lowe’s Foods stores.

“Grants are a hard thing. I’ve had to write for grants, and it’s not easy. What was appealing about this one was how easy it was,” Fowler said.

“I was real pleased to see the Robertson Foundation was involved,” Fowler said.

He got to know Walser through the turkey group and LandTrust.

Fowler is also helping Livingstone College with its plans for a farm.

Fowler said he won’t know how much he can sell his saffron for until he starts selling his first harvest. He wants to make it a good price for consumers.

His harvest is just days away.

“One day you see them blooming, and like three days later, they’re ready.”

Hoy said she is feeling “pretty good about what we’re doing” ever since the board lost its director and the Farmers Market manager last year. “We’re all volunteer again, and I think it’s going well.”