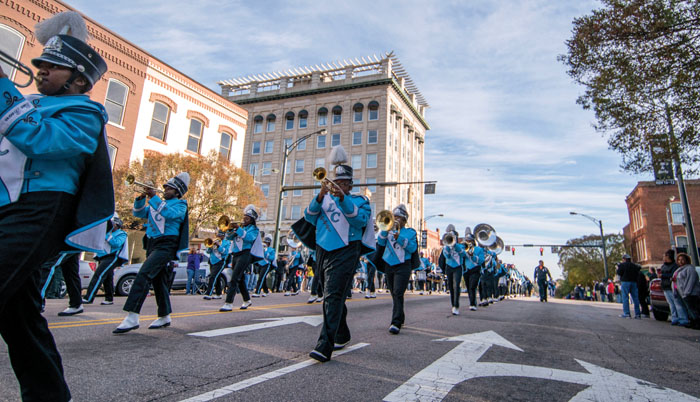 SALSIBURY — Livingstone alumnus James Parks said that he’s attended between 20 and 30 homecoming parades since he graduated in 1965.

He said that the energy and camaraderie of the event is what keeps him coming back.

“Because friends are coming to town and they’ll usually say, ‘We’ll see you.’ And this is kind of a meeting place for a lot of us,” Parks said. “(Franky’s) Chicken Shack is no longer open, and we used to be there on a Friday night. Well, Friday nights are gone now, so it’s switched to Saturday morning, I think.”

During Livingstone College’s 2017 homecoming parade, which took place Saturday, Parks watched more than 100 organizations line up to march, drive, or play in the parade. He sat with his friend Miriam Rush on the steps of their church, Soldiers Memorial A.M.E. Zion Church.

Rush, who is the administrative assistant to Livingstone’s vice president for student affairs, said that the parade seems to get bigger every year.

When asked why, she said that she thinks people just enjoy Livingstone College.

“Almost every organization is involved. And I think it’s a good experience. It’s a festive atmosphere and something that everybody should attend,” Rush said.

“Salisbury is, believe it or not, a lot of people have some type of connection with Livingstone College and, when we have our homecoming events, everybody comes together for the event,” Neely said.

Some of the 100 organizations who signed up to participate included sororities, fraternities, nonprofits, dance teams and marching bands.

Terri Stevenson, who’s been involved with organizing the parade for more than six years, said that the marching bands are a particularly big selling point of the homecoming festivities.

“We always have to remember, when you have a football team, they are circled around a football game. But we know the people are coming largely, at historically black colleges and universities, to see the marching bands,” Stevenson said.

Fifteen high school marching bands from around the Southeast were recruited to play during the parade and at the football game, which took place at 1:30 Saturday afternoon.

The Livingstone College Marching Band was the second in line to march in the parade, just behind the Mini Funk Factory Marching Band.

Anthony Johnson, the band director for Mini Funk Factory, is an alumnus of Livingstone and was chosen as the 2017 grand marshal for the parade.

But he said that he wanted to be with his band, which meant that the 5- to 13-year-old musicians of Mini Funk Factory got to join him in the front of the parade line.

“It’s an honor to have them up front. If you see on the back of our jackets, (it says) ‘inspiring youth through music.’ So having Livingstone College Marching Band right behind us, it’s an honor,” Johnson said. “It’s also a treat for the kids.”

The impact of the homecoming parade even touched people who had no affiliation with Livingstone.

Linda Ruffin and her two sons, Demani and Justin Copeland, drove four hours from Halifax County so Justin could play with his marching band in the parade.

“This is actually his first year being in the band and he’s pretty good at it. He plays the trumpet,” Ruffin said. “He never played anything. But he learned it so quick; I’m so proud of him.”

Ruffin said that the drive was long. Marchers had to begin lining up at 7:30 a.m. for the parade.

“But I always support my kids no matter what they do. … Every game (Justin) plays, I go,” Ruffin said.

Venus Threadgill and Frances Moody came to the parade to watch their granddaughters and great-granddaughters, respectively. Both girls were dancing with Triple Threat Dance and Charm in the parade.

Moody said that, even though it was cold, the girls — Nevaeh, 12, and Jamie, 9, Brown — were excited to participate in such a big event.

The homecoming parade began at 9 a.m. at the corner of N. Main and Liberty streets. It continued to Livingstone’s campus, located at 701 W. Monroe St.

Organizers estimated that 150 to 200 people attended the event.