Full circle: A farm girl finds her way back home 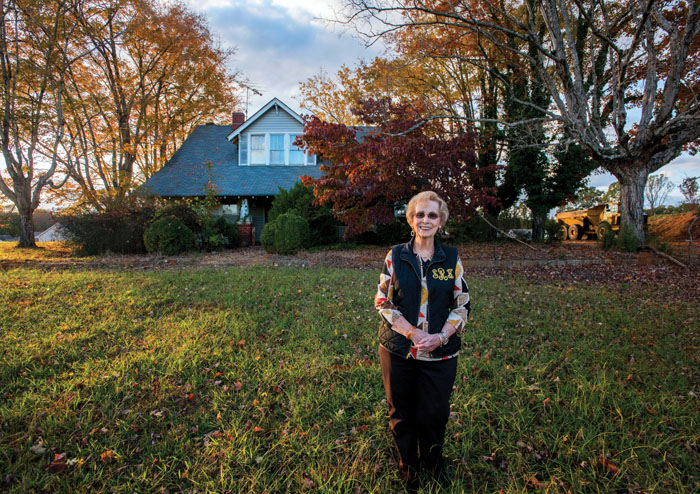 JON C. LAKEY / SALISBURY POST Shirley Kepley Russ stands in the front yard of the homeplace at the Gables at Kepley Farms along Faith Road. Wednesday, October 25, 2017, in Salisbury, N.C.

SALISBURY — Shirley Kepley Russ steps out of the car and looks around. So much has changed at the end of this long lane off Faith Road.

The farmhouse with its sloping roof and three-window dormer still stands, but it’s deserted and rundown. One of the stately maple trees around it, which used to be a brilliant orange in the autumn, has died.

Over to Shirley’s left used to be the pasture and barn. On the other side of the house, the granary has disappeared, along with the hothouse and chicken shed. Her dad’s woodworking shop and her mother’s antiques place are long abandoned and overtaken by neglect and nature.

The fields around the place used to hold wheat, cotton, corn and a vegetable garden with rows that seemed to go for miles. In their place are streets of neatly built houses, easily more than 100 with more being built over the hill.

As a matter of fact, Shirley’s mother called this place “Happy Hill,” and it’s where Shirley spent a cherished childhood. Later, her own daughters came to love the place and their visits with Mamaw and Papaw — Bertha and Garner Kepley.

“In my memory, I go there each day,” Shirley says.

For more than a decade, these acres off Faith Road have been known as The Gables at Kepley Farm — a modern subdivision whose residents must be 55 and older.

If you thought Shirley Kepley Russ would resent what’s happened to her childhood home, you’d be wrong. It actually was her mother’s dream to see the 90 acres connected to the farmhouse become a place for adults to live out their golden years, and her father, Garner Kepley, made sure that happened.

But that’s not the whole story. Several years back, Shirley Russ made her own triumphant return. At 81, she’s living in one of homes at The Gables and could not be happier.

“I feel like I’m living on hallowed ground,” Shirley says.

She looks up toward the farmhouse and says she still hears the voices of her parents — her mom telling each of her three children goodnight and her dad urging the family to get cleaned up for Saturday afternoons in Salisbury.

Bertha Kepley allowed her children to stay out of school for hog-killing days. And when it snowed, the Kepleys actually had a one-horse sleigh in which they rode through the fields and into the woods.

Laughing all the way.

From her living room recliner, Shirley can see the spit of land where she and her late husband, Clyde “Rusty” Russ, lived in a trailer when they first married in 1955.

Shirley moved to The Gables in 2011. It was a big decision. She had lived more than 50 years on Rainey Street in Faith, but after Clyde died in 2003, her big house and yard in Faith were a lot to maintain.

She had serious downsizing to take care of first. She still owned, for example, a mountain of antiques left over from her mother’s days in the business, and she contacted a dealer to help her sell those.

Her daughters assured her moving to The Gables was the right choice.

“I am so blessed to be here,” Shirley says. “I did a lot of praying about it.”

From their first home in eastern Rowan County, Garner and Bertha Kepley usually would take a Faith Road route to and from Salisbury. They passed the Happy Hill Farm along the way, and Bertha always spoke aloud about how much she liked the farmhouse and the land around it.

One day, Garner Kepley returned from a trip to Salisbury and said, “Well, our farmhouse is for sale.”

Shirley Russ doesn’t know how they afforded it, but Bertha and Garner Kepley bought the farm, and it became a home she’ll never forget. She was in the fourth grade.

“I just remember they worked awfully hard to get it,” Shirley says.

Garner and Bertha had three children — Rose, Shirley and Gary, but only Shirley survives. Their farm had cows, pigs, horses and chickens. Shirley sometimes had to milk the cows and bring in the wood for the fireplaces and cookstove in the kitchen.

One of her other jobs was riding in the hay wagon and tramping down the hay as it was thrown to her.

Shirley says her parents were devout Christians who “walked the talk.” They read from the Bible every day, and “their prayer life was constant,” she adds.

The couple were considered prayer warriors, and Shirley heard people many times ask her parents to pray for an ease to their troubles.

Granddaughters Lydia Larios and Jill Fisher say it was not unusual to walk into the barn or Garner Kepley’s workshop and see him down on his knees praying.

“They were the most Godly people we knew,” Fisher says.

Shirley still has a deep alto voice, matching the bass voice of her father, who loved to sing gospel.

Every Saturday, the family worked on the farm until lunch, milking the cows and feeding the other livestock. Then they washed up and traveled to downtown Salisbury, where they shopped, watched all the people, caught a movie at the Victory Theatre and ate a dinner at the Red Pig.

“We knew what we were going to do,” Shirley says.

She describes her mother, Bertha, as a “swift dresser,” matched only by her husband. When he was away from the farm, Garner Kepley dressed impeccably.

“We all have pieces of things he made,” Fisher says.

On Sundays, the grandchildren always accompanied their parents to the Kepley Farm for fried chicken dinners. In the fall, all the brightly colored maple tress near the house made for “some good jumping leaves,” Larios said.

“I loved my life living there,” Shirley adds.

Shirley operated a beauty shop for a time, until she became allergic to hairspray. For 27 years after that, she worked as a color lab technician at Cone Mills in Salisbury until her retirement. She then was a substitute teacher.

Shirley and Clyde had five daughters — “four by birth and one by my heart,” Shirley likes to say. The girls include Fisher, Larios, Melody Welch, Amy Sifford and Machelle Frick.

With all the children and grandchildren looking in on her, Shirley’s house at The Gables is among the busiest in terms of traffic.

Shirley reiterates that a neighborhood for older adults was mostly her mother’s dream. And when it came time to sell the 90-acre farm, Garner Kepley made sure the developer shared their vision.

“I sometimes think now if she could only see it,” Shirley says.

When he sold the property, Garner Kepley worked out an agreement for lifetime rights to the farmhouse. He kept the property mowed and maintained as long as he could.

Bertha died in 2003 during the subdivision’s early planning stages. Garner, who died in 2007, lived long enough to see houses built and a street named for him — Garner Street.

“Daddy wanted the Kepley name in there somewhere,” Shirley recalls.

Shirley has attended Faith Baptist Church her whole life. Besides keeping up with her big family — eight grandchildren and seven great-grandchildren — she looks forward to playing canasta once a month with her friends in Faith.

Shirley Kepley Russ is where she belongs.