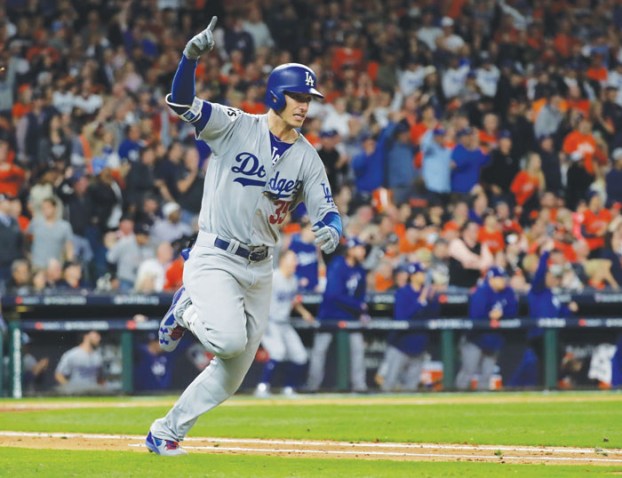 HOUSTON (AP) — Cody Bellinger pulled into second base with his first World Series hit and said: “It’s a miracle!”

With the Dodgers three innings from falling into a deep deficit, the rookie slugger sparked a late comeback that stopped the Houston Astros’ surge.

Hitless in 13 at-bats, Bellinger doubled and scored the tying run in the seventh inning, then doubled home the go-ahead run off struggling closer Ken Giles in a five-run ninth that lifted Los Angeles to a 6-2 win Saturday night and tied the Series at two games apiece.

George Springer put the Astros ahead with a two-out homer in the sixth, the first hit off Los Angeles starter Alex Wood. The crowd at Minute Maid Park, where the Astros had been 7-0 this postseason, was revved up in anticipation of the Astros having a chance to win the first title in their 56-season history on Sunday.

Instead, the Series will go back to Los Angeles no matter what. Clayton Kershaw starts Game 5 for the Dodgers on Sunday night and Dallas Keuchel for the Astros in a rematch of the opener, when Kershaw pitched Los Angeles to a 3-1 win.

Bellinger, a 22-year-old bopper who set a National League rookie record with 39 home runs this season, struck out four times in Game 3 and once more in the fifth inning — his eighth whiff of the Series.

Giles entered to start the ninth and got into immediate trouble, allowing a leadoff single to Corey Seager and a walk to Justin Turner. Bellinger took a low slider, then lined a fastball at the letters to left-center. He raised a hand rounding first and clapped his hands half a dozen times in excitement after sliding into second.

Giles, the loser, was charged with three runs — he has allowed runs in six of seven postseason appearances.