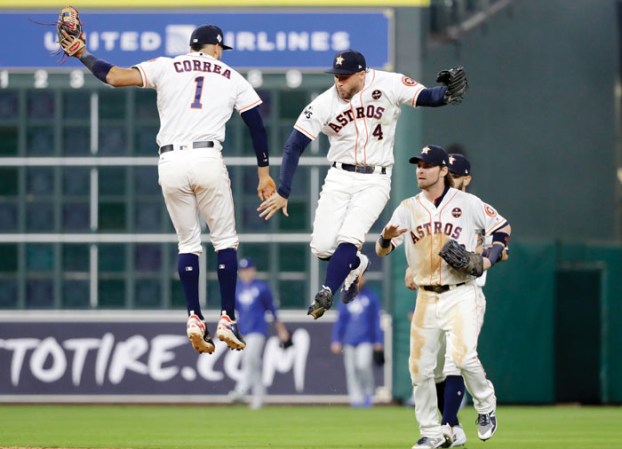 HOUSTON (AP) — A perfect fit in their own place, the Houston Astros are halfway home.

George Springer and the Astros broke out the bats early this time and kept up their big run at Minute Maid Park in October, beating the Los Angeles Dodgers 5-3 Friday night for a 2-1 lead in the World Series.

The ballpark was booming from the start, with cheers, chants and a loud train whistle echoing beneath the closed roof. A sellout crowd stood much of the evening — deep in the heart of football country, with every Houston batter getting a hit or walk, the fans enjoyed the Friday Night Sights.

Yuli Gurriel homered to begin a four-run burst in the second inning that sent Yu Darvish to the shortest start of his career. Astros curveballer Lance McCullers Jr. wobbled, but protected the lead into the sixth. Brad Peacock rose to the occasion with 3 2/3 innings of hitless relief.

Coming off a dramatic rally to win Game 2 at Dodger Stadium, the Astros improved to 7-0 at home this postseason. Jose Altuve & Co. have dominated, too, outscoring the Red Sox, Yankees and Dodgers 36-10 in that span.

Springer lined a leadoff double in the first and the Astros went on to win a home game for the first time in the World Series. They were swept by the White Sox in 2005, and this win put them two victories from a most elusive championship.

Game 4 will be Saturday night when Charlie Morton starts for Houston. Left-hander Alex Wood pitches for the Dodgers, facing a lineup that has put at least one runner on in 14 straight innings.

McCullers left in the sixth as Los Angeles scored twice to cut into a 5-1 deficit. Peacock followed, and shouldered the load for a shaky bullpen by posting his first save in 11 years of pro ball. The right-hander was nearly perfect, walking one and striking out four.

“It was awesome,” said Peacock, who made 21 starts and 13 relief appearances during the regular season. “I’ve never experienced anything like that in my life.”

Coupled with four shutout innings from McCullers to finish off the Yankees in Game 7 of the AL Championship Series, the unorthodox Astros became the first team to have two saves of three-plus innings in one postseason.

On a night when a lot went right for Houston, also credit third base coach Gary Pettis, who’s been having quite a postseason. He boldly sent Josh Reddick careening home on a wild throw by reliever Tony Watson for a two-out run in the fifth.

The Astros rode the momentum of a thrilling victory Wednesday night in Los Angeles, where Marwin Gonzalez hit a tying homer in the ninth on an 0-2 pitch from star closer Kenley Jansen, and Houston went deep three times in extra innings before hanging on to win 7-6 in 11.

This wasn’t nearly as dramatic, not that the home crowd minded.

Fans were revved up from the start when injured Houston Texas defensive end J.J. Watt — who has raised more than $37 million for relief efforts after Hurricane Harvey — wobbled out to the mound on crutches to throw the first ball.

Soon, it was time for the Houston hitters to take over.

Gurriel homered into the Crawford Boxes in left to begin the second — he became the 13th hitter already to homer in this Series. Reddick followed with a double and Evan Gattis, the designated hitter with the game in an American League park, drew a walk.

Marwin Gonzalez launched a drive off the wall in left and wound up with an RBI single when Gattis held at second, seeing if the ball would be caught. Brian McCann singled home another run, and Alex Bregman’s sacrifice fly made it 4-0.

When Altuve doubled, Darvish was done after 1 2/3 innings.

“The fastball command wasn’t there, and the slider was backing up. So he just really didn’t have the feel and couldn’t get any type of rhythm going,” Dodgers manager Dave Roberts said.

On Thursday, Darvish kidded that maybe his goodwill would lead to good luck.

“Since I made that donation, maybe I can use a ball that doesn’t have much pop in it,” he said through a translator.

Nope, didn’t quite work out that way.

HOUSTON (AP) — Pitching in his World Series debut, Yu Darvish kept turning his head as balls clanked off the outfield wall or soared over it.

Darvish had never pitched fewer than three innings in 135 previous big league outings. On baseball’s biggest stage, he got just five outs and left with a four-run deficit in Friday’s night’s 5-3 loss to Houston, which put the Dodgers in a 2-1 World Series hole.

If Los Angeles is to win the World Series, the Dodgers will have to do it at home for the first time since 1963 — and with a bullpen that has covered 13 1/3 innings over the past two games.

Ahead of his start, Darvish joked he should receive a gracious greeting because he wore a “Houston Strong” T-shirt last month to raise money for hurricane relief.

“Maybe I can use a ball that doesn’t have much pop in it,” he said through a translator.

Darvish threw 49 pitches and had just one swing and miss — by Carlos Correa on a 98 mph fastball in the first inning. There was also a missed bunt attempt by Marwin Gonzalez before his run-scoring single in the second.

The 31-year-old Japanese right-hander seemed amped up. His fastball averaged 94.7 mph during the season, according to Brooks Baseball, but with higher velocity against the Astros, his slider flattened.

Acquired from Texas at the July 31 trade deadline, Darvish had been 2-0 with a 1.59 ERA in a pair of postseason starts, winning Game 3s against Arizona in the Division Series and the Cubs in the League Championship Series.

But he seemed out of sort right from the start against Houston, falling behind leadoff hitter George Springer 3-1 and allowing an RBI double.

Yuli Gurriel drove a slider into the left field Crawford Boxes opening the second, and Josh Reddick doubled to left for his first extra-base hit in 49 plate appearances this postseason — the third extra-base hit off Darvish among the Astros’ first six batters.

Evan Gattis walked and, after a visit to the mound by pitching coach Rick Honeycutt, Gonzalez hit a 373-foot single off the left-field wall for a 2-0 lead.

Brian McCann lined an RBI single into right and Alex Bregman hit a sacrifice fly with one out, and Darvish was done for the day, skirting the edge of the World Series logo as he walked to the third-base dugout.

Yasiel Puig also had a bad day. With Los Angeles trailing 4-1 in the fourth, he singled down the third-base line, ran past first, slowed to almost a stop, then noticed the ball was bounding off the low wall. He then started for second and was thrown out by Gonzalez.

Reliever Tony Watson added his own errant moment, throwing Gattis’ chopper past first baseman Cody Bellinger in the fifth, allowing Reddick to score from first base on what was ruled an infield hit and a two-base error.

After a strong start by Clayton Kershaw in the opener and a good-but-abbreviated one from Rich Hill in Game 2, the Dodgers have failed to retire the side in order for 14 consecutive innings. The bullpen stretched a scoreless streak to 28 innings during Game 2 on Wednesday night before blowing a save and losing in 11 innings.