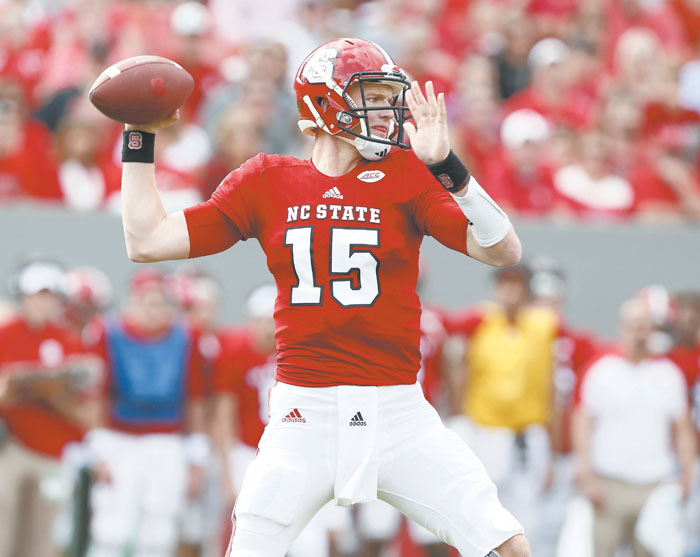 Things to watch in the Atlantic Coast Conference in Week 9:

GAME OF THE WEEK: No. 14 North Carolina State at No. 9 Notre Dame. This is the ACC’s only game this week involving two ranked teams, and both of them started the season outside the Top 25. The Wolfpack (6-1) have reeled off six straight wins behind DE Bradley Chubb and a defense that is the league’s toughest against the run, allowing 91.3 yards rushing per game. The Irish (6-1) — who play a handful of ACC schools every year as part of their league membership in other sports — rank sixth nationally in rushing, averaging nearly 318 yards to rank behind Arizona and four schools that run the triple option. N.C. State coach Dave Doeren calls it “a great head-to-head, heavyweight battle right there.”

An Irish defense that has produced 17 takeaways this season, including three in a 49-14 victory over USC last weekend, versus a Wolfpack offense that has surrendered the ball just three times. QB Ryan Finley has yet to throw an interception.

Saturday’s forecast is temperatures in the low 40s, occasional showers and maybe a snow flurry or two. . Last year’s game, won by the Wolfpack 10-3, was played in Raleigh with Hurricane Matthew moving through and the teams totaled 311 yards and 10 fumbles (each lost two). It was the low point of Notre Dame’s 4-8 season that brought changes all around Brian Kelly’s program. . Irish QB Brandon Wimbush has accounted for 1,410 yards (902 throwing) and 18 TDs (10 rushing) with two interceptions. . Finley has completed nearly 70 percent of his passes for 1,968 yards and 11 touchdowns. His streak of attempts without an INT is 313.

BEST MATCHUP: Clemson’s run defense vs. Georgia Tech’s triple-option offense. The Yellow Jackets (4-2, 3-1) can run the ball, with coach Paul Johnson’s ground-heavy system ranking second in the nation with an average of 373 yards rushing. The seventh-ranked Tigers (6-1, 4-1) are undefeated when they hold their opponents to 133 yards rushing or fewer, with Syracuse gaining 162 yards in its upset two weeks ago.

INSIDE THE NUMBERS: Two of the best rushers in the ACC are quarterbacks. Georgia Tech QB TaQuon Marshall (117.3 ypg) leads the league in rushing while reigning Heisman Trophy winner Lamar Jackson of Louisville ranks third with an average of 108.5 yards — a fraction of a yard per game behind Yellow Jackets RB KirVonte Benson. No quarterback has ever finished a season as the league’s leading rusher.

LONG SHOT: History suggests Duke might give No. 13 Virginia Tech a test. The Blue Devils (4-4, 1-4), who are 16-point underdogs, have won each of their last two visits to Blacksburg, Virginia. Up-and-down Duke has followed a four-game winning streak by losing four in a row, and if they’re going to pull another upset at Lane Stadium, they’ll have to solidify a defense that has allowed 11 touchdowns of at least 40 yards this season — including scoring runs of 79 and 92 yards in last week’s loss to Pittsburgh.

IMPACT PLAYER: Boston College has blossomed into one of the ACC’s success stories in recent weeks, pulling road upsets of Louisville and Virginia, and efficient redshirt freshman QB Anthony Brown led the way in the last one, completing 19 of 24 passes for 275 yards and three touchdowns in beating the Cavaliers. Brown and the Eagles can turn even more doubters into believers with a big night against Florida State.