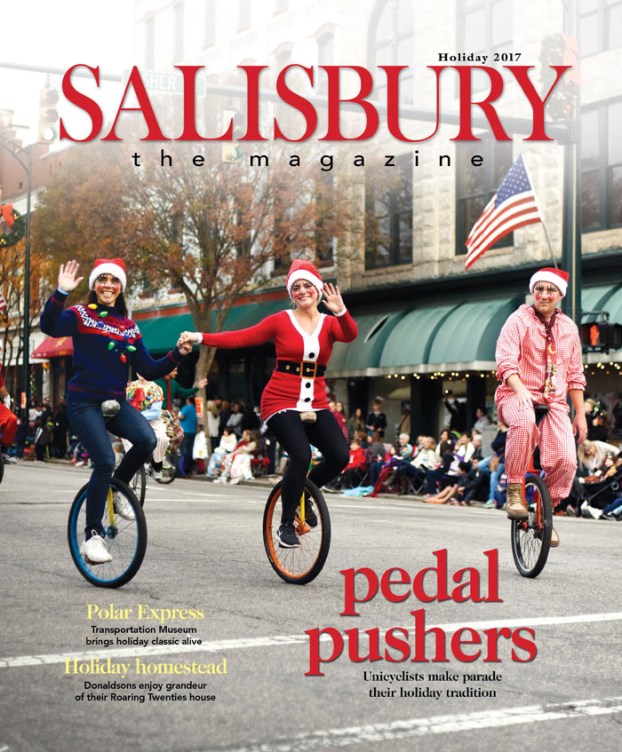 Holiday 2017 issue of Salisbury the Magazine is now available

The Holiday 2017 issue of Salisbury the Magazine has reached subscribers and will be distributed in various Rowan county locations this week.

Copies also are available at the Salisbury Post circulation desk.

The cover story reports on Clyde Arey, his unicycle and how his participation in the Holiday Caravan 40 years ago led to a Thanksgiving parade-pedaling tradition for Arey’s children, grandchildren and many of their friends.

Look for these clownish unicyclists again when this year’s Holiday Caravan rolls through Spencer and Salisbury on Nov. 22.

Elsewhere in the Holiday issue, you will find Elizabeth Cook’s story on the handsomely decorated home of Traci and Seamus Donaldson. The 8,000-square-foot Walter McCanless House is elegant no matter what the season.

And speaking of crowds, Rowan Countians will show up in force again this year at The Arc of Rowan’s Festival of Trees. Jessica Coates gives a behind-the-scenes account of how the Festival of Trees happens every year.

Other contributions include Rowan Countians reminiscing about some of their favorite Christmas toys from childhood; a Q&A with Rowan Original Mike Connor, who spent considerable time in the Holy Land this year; a Salisbury’s the Place column by Karl Hales; Deirdre Parker Smith’s book recommendations; Scene photographs from many local events; and a November-December calendar of things coming up.

Jon C. Lakey shot most of the photo packages for each story with Scene contributions from Amanda Eller, Garrett Price and Nancy Shirley.

A Winter 2018 issue should reach subscribers about Dec. 20.

SALISBURY — The Cornish-American Heritage Society will hold the 18th Gathering of the Cornish Cousins in Salisbury and Gold Hill... read more