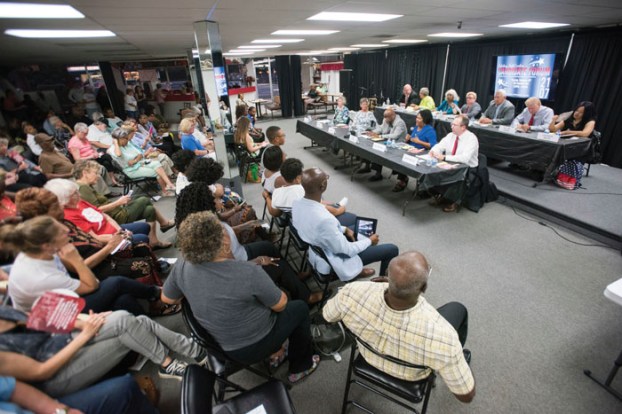 The Salisbury City Council race looks unpredictable this year. After years of re-electing the same people over and over — mostly — Salisbury voters are in a state of flux, if not outright turmoil.

The first jolt came two years ago when longtime City Council members Paul Woodson and Pete Kennedy opted not to seek re-election. They’d been mayor and mayor pro tem for parts of their long tenures on the council.

That meant the power of incumbency was only going to affect three of the council’s five seats. Suddenly, it was open season on two seats, and 16 people filed for office.

With that many people in the race, it took less than 2,000 votes to win the top spot, which traditionally means you’ll be mayor. The top five and their vote totals in 2015 were:

Hardin, who has posted messages about what he’s going to do when he’s mayor, was pretty far away from the top spot in 2015 and looks like a long shot to make it this year.

Tamara Sheffield, who is running again, came in seventh with 1,080 votes.

The other 2015 also-ran on this year’s ballot is Todd Paris, father of former city manager and wunderkind Doug Paris. The younger Paris and the city parted ways after a three-hour closed session in June 2014. The reason for the “mutual termination” agreement remains cloaked in bureaucratic confidentiality, but the payout was public: Doug Paris walked away with a severance package of more than $205,000 in city taxpayers’ money.

By the time the 2015 election rolled around, young Doug had landed a job in Midland and his father wanted to join the council that had given Doug the mutually agreed upon boot.

This year the city has 13 candidates with one open slot; Blackwell is not running again.

Salisbury has a decades-old pattern of electing one black person to the City Council who then goes on to become one of the council’s leading voices. That includes attorney Darrell Hancock, who became mayor pro tem. Wiley Lash led the slate and was chosen as the city’s first and so far only black mayor. Pete Kennedy was on the council more than two decades and served as mayor pro tem for several years.

In 2015, Hardin was the winning candidate of color, though far from the only black person on the ballot. Hardin turned out to be more of a disruptor than a leader. That’s his style, and he makes no apologies for it. He can be aggressively unapologetic if you cross him, as evidenced by occasional outbursts on his Facebook page.

Hardin has not lived up to the expectations of many who voted for him. Unless he’s won over a lot of new supporters, his re-election looks iffy.

As many have said this year, Salisbury’s demographics are changing. It is a majority minority city by a slight margin, and would have two or three black council members if it truly reflected the city’s population.

Council, however, tends to reflect the people who vote, not just those who live here. While turnout for municipal elections tends to be disappointing, it drops off even more in heavily black precincts.

That could be different in this election. The upside of the past year’s unrest is a new level of civic engagement throughout the city.

A surge in voter turnout could be the answer we need. There are several strong candidates, black and white. Turnout is the wild card that could disprove every assumption about City Council elections and force some (this writer, for instance) to eat crow.

Who are the city’s voters? As of Oct. 5, Salisbury’s registered voters broke down like this, according to the Rowan County Board of Elections:

The elections board did not have Salisbury-specific 2015 registration figures to compare, but city turnout was 16 percent.

If you’re still unsure who should get your vote, come to the City Council Candidate Forum that David Whisenant is moderating 6 p.m. Monday at Catawba’s Crystal Lounge. The Post is a sponsor, along with the Chamber of Commerce, Catawba, WSAT and AT&T.

Good luck to the candidates. They’ve spoken at countless forums and  events — good training for the positions they seek.