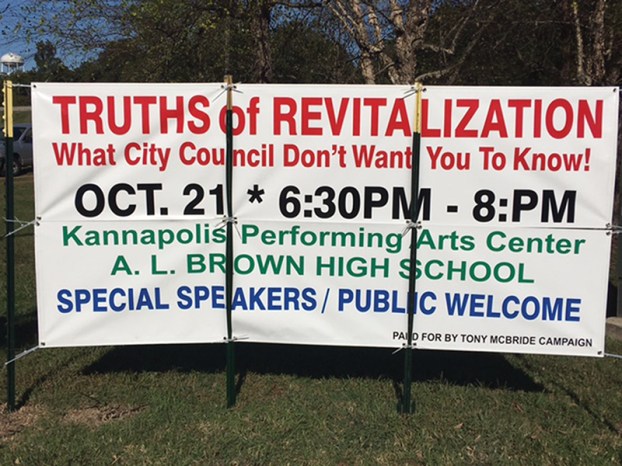 After his banners were removed by city staff, Kannapolis City Council candidate Tony McBridge cut it up into six pieces and reassembled the new version. The new version also didn't comply with city ordinances. Submitted photo KANNAPOLIS — An advertisement for a campaign event sparked a debate about sign ordinances this week when the city removed signs placed by candidate Tony McBride.

McBride, a 53-year-old businessman, is one of seven candidates running for three seats on the Kannapolis City Council. Last week, he placed a pair of banners at Main Street’s intersection with Loop Road and Dale Earnhardt Boulevard. They advertised an event called “truths of revitalization: what the City Council don’t want you to know.”

The banners measured 4 by 8 feet, which violates the city’s sign ordinance. So he cut the signs into smaller pieces and tied the individual pieces together. Still, the city said they didn’t comply with the ordinances.

McBride said he’s being targeted by the city staff because he feels differently about some issues than incumbent candidates.

“I’m the only City Council candidate that’s been outspoken or is doing anything,” he said. “I’m seen as the biggest threat, and I’ve ruffled a lot of feathers and they want to shut me down.”

“Our code enforcement team, constantly, year-round, is looking at banners and signage around the city,” she said. “If they see that a sign doesn’t conform, then it’s removed. … All of (McBride’s) regular election signage is fine. It was just these two.”

The flare-up over signs surfaced Monday, when city staff removed McBride’s signs, deciding that they were political in nature and exceeded the 2-by-3-foot maximum size allowed in the ordinance. McBride said he met for an hour with Planning Director Zach Gordon. During that meeting, city staff members informed McBride about the size limits and other rules in the sign ordinance, Privette Keller said.

After that meeting, McBride cut his previous banner into pieces, attached the pieces back together and put the banners in their original locations. McBride said a code enforcement officer approved the new version of his banners.

“You’re telling me I can do this?” he recalled asking a code enforcement officer.

City employees removed the signs a second time, ruling that they constituted an “off-premise sign” that was advertising an event. The sign ordinance allows “off-premise signs” to be placed only by governments and quasi-public and nonprofit agencies.

Privette Keller said staff members again met with McBride to tell him that his signs violated city ordinances and returned them.

McBride said he doesn’t understand how his signs could be against the city’s ordinances because he was specifically told by a code enforcement officer that cutting it into pieces was OK.

“It’s like my free speech is trying to be squashed,” he said. “It’s like city government does not want a different opinion than theirs.”

McBride said he’s not actually opposed to downtown revitalization in Kannapolis. He just wants more local businesses to be involved.

Meanwhile, he still plans to hold the event advertised by the signs, which is scheduled Saturday at A.L. Brown High School.

SALISBURY — At 27 years old, Ryan Evans is the youngest candidate for Salisbury City Council. Because of his age,... read more