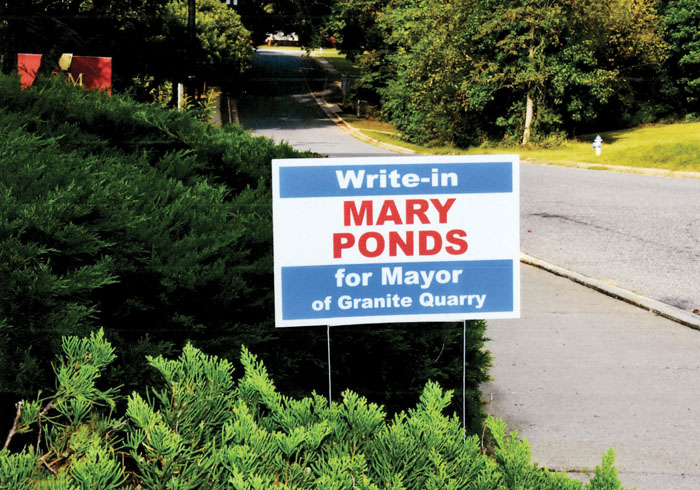 Yard signs encouraging write-in votes for former Mayor Mary Ponds have been showing up along some streets in Granite Quarry, along with signs for candidates who are on the Nov. 7 ballot. Submitted photo

GRANITE QUARRY — Mary Ponds is not an official candidate for Granite Quarry mayor, but a visible campaign promoting her as a write-in option includes signs, a website and a Facebook page.

Ponds, who served on the town board from 1999 to 2015, including 14 years as mayor, stresses she has nothing to do with the write-in effort.

“This is a people thing,” she said Monday. “… They are doing it totally themselves because I do not have one red penny invested in this.”

Mayor Bill Feather is on the ballot for the Nov. 7 election, and he’s running unopposed for mayor, which carries a two-year term. But the municipal ballot does allow write-in votes.

While she is not seeking the office, Ponds said that if by chance she were elected, she would not turn the position down.

“I would accept, if it were the wishes of the people,” Ponds said, “simply because they have that much confidence in me. … It’s interesting. It’s humbling, really, to know people have that much respect, faith or confidence — to know that they see me in that light.”

Ponds also emphasized she and Feather are “very good friends.” “We discuss a lot of issues, even today,” Ponds added. “We’ve never had any conflict. He’s my friend, and I’m his friend.”

Feather agreed, adding he has avoided a lot of questions about the write-in campaign on Ponds’ behalf because of his friendship with her.

“I really can’t speak against Mary, and I won’t,” Feather said Monday. “We’ve accomplished a lot together over the years.”

Feather said he hates that the write-in effort has pitted groups of people against each other. “I’m sad about that,” Feather said. “It shouldn’t be that way. I think Mary and I are going to try and stay above that.”

Shell said Ponds has not “in any way endorsed or approved the information and how it’s presented.” Shell said he and other people advocating for Ponds are doing so as individuals and not as a campaign committee.

“It’s truly a grassroots effort and a wonderful display of democracy at its best in Granite Quarry,” he said in printed materials distributed to the Post and on the website.

Over the past two years, Shell said, he has noted “increasing concerns about the performance and direction of the town’s government.” Shell indicated he had done a lot of research and had many conversations before deciding to endorse a write-in candidacy for Ponds.

“A very consistent, overall message heard is the need for new leadership, and Mary is thought to be the best choice to provide it while also being likely to succeed with a write-in vote,” Shell said.

Shell lists several bullet points in support of voting for Ponds. Among them, he says, Ponds “doesn’t believe in intensive development of Granite Quarry, just to have a larger tax base.”

He said Ponds wants to maintain desirable characteristics of the town and she would not micromanage the town staff  “and attempt to control every aspect of the town’s business.”

Shell said Ponds would stem the exodus of good people from the town staff, conduct town meetings so that all perspectives and dialogue are heard and “would help restore meaning and usefulness to public hearings.”

Shell added, “Our local town government over the past two years has been undergoing a transformation in which the emphasis has become one of changing the character of the town to where there is an increased focus on attracting commercial development, creating new neighborhoods, and forcing standards and restrictions on the existing businesses as if there were some need for the little town of Granite Quarry to become a model village.”

More information is on the website, which includes an example of how to write in Ponds’ name on Election Day and also recommends Kim Cress and John Linker for the two seats open on the Board of Aldermen.

Shell said he did not personally know Ponds before starting the write-in effort on her behalf.

Of Shell, Ponds said, “I would recognize him if I saw him, but to say I know him, I do not.”

Feather said the biggest issue he has about the write-in campaign against him is that “when you put information out, you need to put all the information out instead of bits and pieces.”

In his materials, Shell has noted that only 86 people voted for Feather in 2015 when he was also unopposed for mayor.

Reminded of that low number, Ponds said maybe the unofficial write-in campaign for her will spark better voter turnout overall.

“It’s a good thing,” she said of that possible outcome.