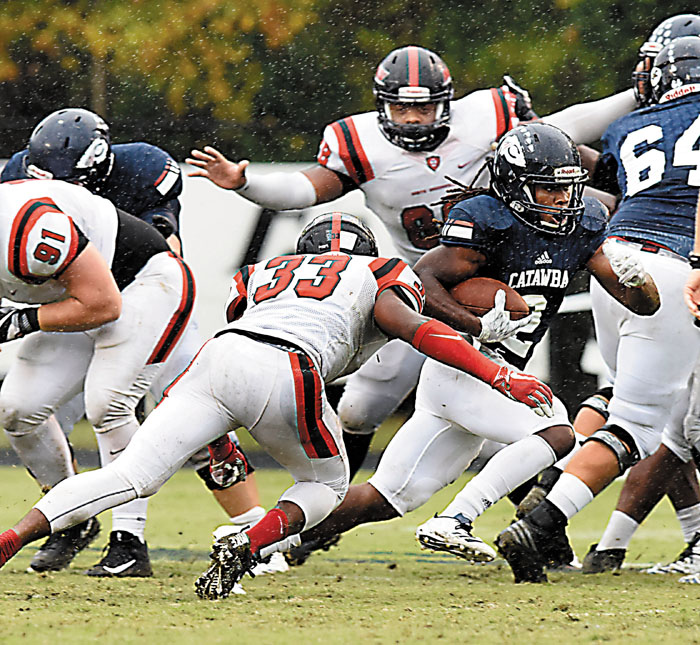 Wayne Hinshaw file photo/for the Salisbury Post ... Catawba’s Kenyatta Greene (2) runs in the rain during the victory over North Greenville on Oct. 7.

SALISBURY — Junior Kenyatta Greene is a triple threat who is accounting for 119 all-purpose yards per game for the Catawba Indians.

Greene, who played sparingly last season, has become the team’s No. 2 rusher and No. 3 receiver as well as the primary kickoff returner. He’s scored seven touchdowns, while averaging 5.0 yards on running plays and 22.9 yards on receptions.

“He wasn’t used much last year, but you can see him stepping into his role now,” Catawba head coach Curtis Walker said. “Any time the ball is in his hands, he’s one block  — or one missed tackle — from going all the way.”

Greene usually appears to be the quickest man on the field. He demonstrated exceptional speed on his 48-yard receiving touchdown against Wingate on Saturday, a mad dash to the end zone that tied the game at 24-all with 2:48 left to play. Catawba eventually lost, 27-24, but Greene’s wheels wowed the homecoming crowd.

“He out-ran some guys, he ran around some guys, and he ran through some guys on that touchdown,” Walker said. “It was electrifying. I could hear the crowd noise escalating every time he made another guy miss. He made the same kind of play when he went 86 yards against Carson-Newman.”

Greene has had a run or a reception of at least 19 yards in all seven of Catawba’s games. Besides explosiveness and vision, he has the hands and route-running ability of a wide receiver, so he’s always a factor, no matter what kind of defense Catawba faces. Wingate stuffed Catawba’s ground game, but the Bulldogs didn’t stop Greene. He had five catches for 99 yards.

“I always feel if I can catch the ball in open space, I can make a play for us,” Greene said.

Greene said he isn’t certain what his 40-yard dash time is, but it’s like his coach at North Burlington High in New Jersey commented during Greene’s prep days,  “There is 40 time and football time and there is a big difference between the two. Kenyatta has football time. On the football field he is lightning-fast.”

If you’re starting to wonder how Catawba got a guy like this — from Jersey, of all places — well, it’s a long story.

Greene’s father got him started in football, and while he would try other sports (basketball, track and field, lacrosse), football became his focus early on. He was fascinated watching NFL back Adrian Peterson rolling up yards on TV. Peterson became his favorite player, and Peterson’s team,  the Minnesota Vikings, became Greene’s team.

Peterson rushed for 134 yards and two TDs on Sunday for his new team, the Arizona Cardinals.

Greene was a sensational player at North Burlington High, where he would disappear into the line only to suddenly emerge from a mass of bodies, sprinting for the end zone. Other times, he would start on a sweep, reverse his field, find a cutback lane, and then just out-run everybody. He was a 1,000-yard rusher as a sophomore. He rushed for 1,295 yards as a junior.  As a senior in the fall of 2013, he rushed 201 times for 1.372 yards and 17 touchdowns and he had 18 catches for 313 yards and four touchdowns. In the first round of the playoffs his senior year, he had four touchdowns — after the first quarter. In the final game of his high school career, he rushed 46 times for a school-record 337 yards.

Greene was second team All-State and played in a  prestigious New Jersey all-star game, and there were no questions about his character or work ethic. His high school coach raved about his leadership on and off the field.

The D-I schools weren’t interested in offering a scholarship, but smaller schools were excited about Greene. Catawba’s recruiting net is almost always cast to the south — to South Carolina. Georgia and Florida — but the Indians knew all about Greene and wanted him.

Greene believed he could make it in Division I, however,  and he headed to the University of West Virginia as a recruited walk-on to prove it.

He redshirted the 2014 season at West Virginia, but occasionally he blew by the first-team defense as part of the scout team.

He never found out if he could have made it at West Virginia. In September, 2015, on a Saturday night/early Sunday morning after the Mountaineers had beaten Liberty, Greene, who hadn’t played in the game, was hanging out in downtown Morgantown. According to newspaper accounts, there was an altercation. Greene and a teammate suffered stab wounds and were treated at a hospital. Greene wasn’t charged with anything, and appears to have been a victim, but he was deemed guilty of being in the wrong place at the wrong time.

A day later, West Virginia dismissed Greene and his wounded teammate from the program for violating team rules. There were never any specifics released about what rules were broken.

Catawba believed in Greene all along and was willing to give Greene a clean slate and a fresh start.

“(Catawba assistant) Corey Ready had talked to me about coming to Catawba since I was in high school,” Greene said.

Ready finally got his wish. It took an extra couple of years, but now Greene is making up for lost time.

Greene made little impact in 2016. He was involved in five kickoff returns, but his only significant touches from scrimmage came against lowly Brevard. He scored his first college touchdown against the Tornados.

But this season has been different. Now Greene supplies the lightning in a thunder-and-lightning tag team with bull-dozing senior Eamon Smart. Greene still wears the No. 2 jersey, just as he did in  high school for the North Burlington Greyhounds, and there are times when he makes college football look as breezy and easy as it was for him in high school.

“You love blocking for a guy like that,” Catawba center Kevin Norton said. “He can turn the smallest crease into something big. He can make something out of nothing.”