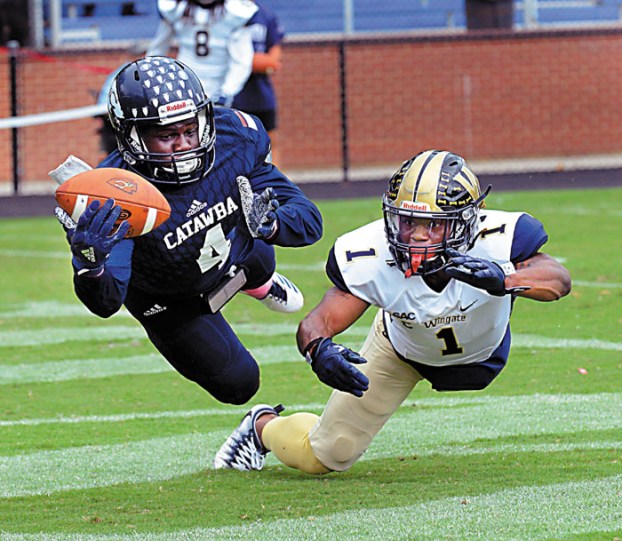 Wayne Hinshaw / for the Salisbury Post Catawba’s receiver Keyon West makes a diving catch in the end zone that popped out when he hit the ground. Wingate’s Kam Johnson is covering. Catawba lost to Wingate on Saturday, 27-24.

SALISBURY — Catawba’s Indians couldn’t gain a foot when they needed it, and now Wingate has a leg up on everyone in the South Atlantic Conference race.

Everyone agreed a great Division II football game, an emotionally charged game, was played on Saturday at Shuford Stadium, but none of the Indians will look back on homecoming 2017, with fondness. A lot can happen — Tusculum’s stunning upset of Newberry yesterday was a reminder  —  but there’s a chance the life got squeezed out of a promising Catawba season in front of 3,898 sun-splashed fans. Joyful cheers changed to frustrated groans in a matter of seconds.

“We played really well at times, but not so well at other times,” drained Catawba head coach Curtis Walker said. “We just didn’t handle our emotions well today, and not controlling those emotions prevented us from playing to the best of our ability.”

Freddy McCollum’s 27-yard field goal split the uprights on Saturday’s final snap, and the visiting Bulldogs claimed a dog-piling, 27-24 victory. Catawba dominated the second and third quarters and appeared on the road to victory late in the contest, but then everything fell apart.

“It’s amazing how quickly it can turn,” Wingate coach Joe Reich said. “One little thing, one play, and everything changes.”

Catawba quarterback Patrick O’Brien was super. He was 25-for-33 for 356 yards and two scores. Catawba had to move exclusively through the air, and Kenyatta Greene (6 catches, 99 yards), Sam Mobley (5 for 96), Jourdan Osinskie (6 for 74) and Keyon West (6 for 70) had exceptional afternoons. But the Bulldogs stuffed the run so fiercely that Catawba linebacker Trey Evans, who romped 34 yards with a faked punt, was the Indians’ leading rusher. Eamon Smart, a top-50 rusher nationally coming in, got just 25 yards on 14 carries.

“Stopping the run, that’s something we’ve been very good at all year,” Reich said.

Wingate presented an average passing attack, but bludgeoned the Indians on the ground for 246 yards on 47 carries.  Wingate’s XXL tailbacks Lawrence Pittman and Blake Hayes are larger than Catawba’s linebackers and they were grinding like runaway locomotives behind 300-pound linemen.

It was all Wingate early. The Bulldogs went 71 yards to score right out of the gate.

Catawba’s first possession ended with fourth-and-1 decision at the Wingate 48. The Indians declined the gamble, played the field-position game, punting to the Wingate 11. But Wingate (6-0, 3-0 SAC)  marched right out of that hole. The 24th-ranked Bulldogs were headed for another TD, but a holding penalty led to them settling for a field goal and a 10-0 lead.

Catawba (5-2, 1-2) hibernated until the second quarter. Fourth-and-5 at the Catawba 32 seemed an unlikely place for the Indians to fake a punt, but the ball was snapped to Evans, the blocker in front of punter Caleb Berry. There was nothing but grass in front of him, as he bolted through a mile-wide gap on the left side. He got the first down and a lot more.

“I took a chance, made the call and it worked out,” Evans said. “I really feel like I should’ve scored. I didn’t, but that play did help get us going. It gave us momentum.”

Catawba kept momentum a long, long time. After Evans’ big play, the Indians drove to score with O’Brien repeatedly finding Osinskie, the tight end, When Smart squirmed into the end zone on the toughest 1-yard run of his life, Catawba trailed 10-7 with 11:38 left in the first half.

While Catawba was still down, 10-7, at halftime, it felt like the Indians were winning. It felt like they’d turned the tide. Then the third quarter reinforced that feeling.

Catawba’s first possession of the second half included another huge catch by Osinskie. It set up the Lee Brackman 22-yard field goal that tied the game at 10-all.

Late in the third quarter, Catawba seized the lead for the first time. The Indians overcame two crippling penalties (including a hold on a touchdown pass) to move 80 yards. O’Brien spotted Mobley, racing all alone down the middle, for the 38-yard score that put Catawba on top, 17-10.

When Wingate got the ball with 13:17 left in the game, it was desperation time for the Bulldogs. They hadn’t scored since the 4:15 mark in the first quarter, and now they were behind.

Pittman immediately smashed for 29 yards to start a drive. On a critical fourth-and-1 at the Catawba 39, Pittman barreled through Catawba linebackers for 12 yards. Hayes pounded the ball from the 11 to the 3, and Wingate finished a 72-yard push with a quick run by J.T. Stokes. On that humongous drive, 64 of 72 yards came via the ground.

So it was 17-all when Catawba got the ball with 9 minutes left. The Indians needed to answer — and tried. O’Brien’s 17-yard completion to Mobley put the Indians on the Wingate 47. The Indians wanted to run the ball. Smart got 6 yards on first down. Then he got 1 yard, then 2. Just shy of the Wingate 38, Catawba needed about a foot for a first down.

“We were expecting a sneak, but O’Brien was in shotgun,” said Wingate linebacker Zack Singleton, who made 12 tackles. “Then I’m thinking they might to do something weird like a sweep, but our linemen were pinching in hard, and then the run came right up the middle.”

Singleton’s fellow linebacker Robbie Wallace made the play, tripping up Smart before he got started. Smart did his best to lunge forward but didn’t get a favorable spot. The spot outraged the Indians enough that they were hit with a 15-yard flag for unsportsmanlike conduct. Now Wingate not only had the huge stop, it had the ball at the Catawba 47.

“And two plays later, another unsportsmanlike conduct call on us,” Walker said. “Emotions.”

Catawba was reeling. Then Hayes lowered his shoulders and thundered into the end zone from the 14-yard line. Wingate led 24-17. There was 4:30 left.

The Indians responded. O’Brien hit West for a clutch third-down conversion. Then he delivered the ball to the speedy Greene in space. Greene shrugged off two tacklers and sprinted down the Catawba sideline 48 yards for six points. Brackman’s PAT tied it at 24-all with 2:48 left.

Then Catawba stoned Wingate. Cornerback Cris Page spilled Pittman for no gain on first down. All-American Kyle Kitchens smothered Pittman for minus-5 on second down. Evans had tight coverage on a desperate pass on third down. Wingate punted, and Catawba had the ball at its 39 with 1:15 left. There seemed to be only two possible outcomes — Catawba victory or overtime.

O’Brien’s quick pass to Greene moved the ball at the Wingate 47. The crowd roared. Reich fretted.

“We’re getting ready to start using our timeouts,” Reich said. “We were just hoping we could hold them to a field goal. But then it all changed.”

It changed drastically on the next snap. O’Brien completed a pass to Mobley for 11 yards to the Wingate 36. Time was more important than yards that point, but Mobley is a fighter, and he wasn’t going down meekly. And then the ball squirted out.

“Joe Kelly and Tim Longmire poked it loose,” Singleton said. “I saw the ball come out,  very close to our sideline. That was the longest split-second of my life, but I got on the ball before it went out of bounds.”

Now Wingate had the ball with 1:01 left at the Wingate 36. But an offensive pass interference flag pushed the Bulldogs back to their 21, first-and-25.

“We were very close at that point to just sitting on it and taking our chances in overtime,” Reich said. “But then Catawba jumps offsides for 5 yards, so we figure we’ll run Pittman and see what happens. He gets 11 (yards), and now it’s second-and-9 and a first down is more feasible. And then — bang, bang.”

Wingate QB James Whitaker got those 9 yards with a pass. Then he completed another short toss. Two Pittman runs rammed the ball to the Catawba 39. Just 16 seconds left, and still out of field-goal range. But then Whitaker connected with Malik Bledsoe for 29 yards to the Catawba 10.

Then McCollum was kicking his winning field goal, Bulldogs were celebrating, and Catawba fans were filing out in disbelief.

“We won against a great team,” Singleton said. “Catawba is so much like us. All day long it felt like we were playing against ourselves.”

By Mike London mike.london@salisburypost.com Coaches hate to call any game the biggest of the year, because if you lose the... read more