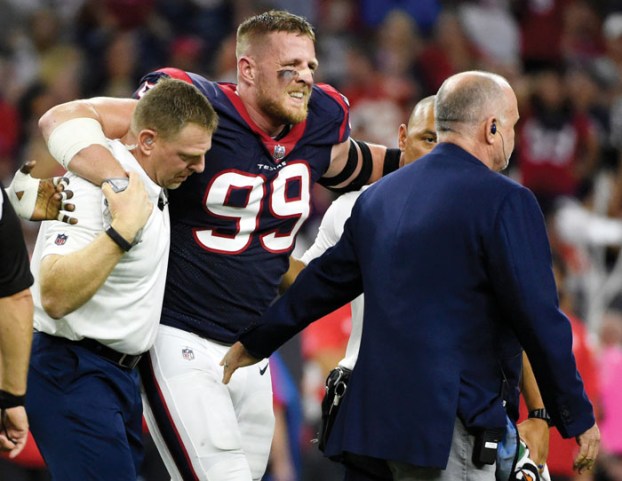 AP Photo/Eric Christian Smith, File ... Houston Texans’ defensive end J.J. Watt (99) is helped off the field after an injury during the first half of last Sunday’s NFL game against the Kansas City Chiefs in Houston.

Some injuries hurt more than others

That’s the mantra heard throughout the NFL when players go down. It’s almost a tired cliche now because, in nearly every case, the next man up isn’t equal to the one who just left.

Oh, sure, folks can point to Tom Brady stepping in for Drew Bledsoe in 2001. That’s as rare as a smile from Bill Belichick.

Nothing positive results from NFL teams losing big stars to major injuries. No offense can be prepared to be without an Odell Beckham Jr. long term. No defense can have a true backup plan to replace a J.J. Watt .

Yet that’s what’s going on in far too many pro football cities.

With only 16 regular-season games per team, opportunities to watch special on-field talents are limited enough. Then, when the vagaries of injury hit, the entire dynamic of a team changes.

It’s difficult enough when any starter goes down. When several do — particularly at one position, as hit the Giants’ receiving group or the Texans’ pass rushers — the chances of recovering are slim.

Even worse, perhaps, the attention paid to those teams by their fans severely diminishes.

At least in Houston, there’s the excitement being created by rookie quarterback Deshaun Watson.

But that’s a lot of extra pressure to put on a youngster at that position; with Watt, Whitney Mercilus and the suspended Brian Cushing absent.

In the Big Apple, Giants fans are taking the approach Jets fans had heading into the season.

They’re wondering if their team can lose enough games to secure a high enough draft pick to select a top prospect at quarterback for when Eli Manning is through.

And elsewhere in the nation, viewers are questioning why they are stuck with the mismatch of the Giants at the Broncos on Sunday night.

That’s what these types of significant, long-range injuries do.

“It’s unfortunate,” Texans coach Bill O’Brien says. “You feel for the guys when they get injured: J.J. (and) Whitney missing a year after all the time they put in.

“But at the end of the day there’s a big but there … the train keeps moving. It’s not going to be one guy that takes their spot. It’s going to be multiple guys, it’s going to be schematic, it’s going to be a unified effort to make up for the loss of them, but it’s definitely something that you have to move forward with …”

In other words, don’t do what longtime ESPN broadcaster Chris Berman used to always advise, and “circle the wagons.”

Except that the Giants don’t have much choice in what might be their most disappointing season since Bill Parcells left.

They had expectations of a second straight season in the playoffs, this time by winning the NFC East.

Generally, that was the outlook from outside the organization.

Who knew that a mediocre offensive line the team counted on improving would regress? That a defense with the potential to be dominant would become leaky, especially in crunch time? And then … the injuries.

“It hit home while we were in a two-minute drive and I looked around and we had no one in the huddle,” guard Justin Pugh said of a recent practice. “Hats off to the tight ends for going out there and stepping up and going and probably running some routes they haven’t ran ever. We have guys playing the No. 1 receiver that’s normally a blocking tight end. Hats off to those guys. They went in and they competed.”

Competing, not winning, is sometimes all that can be asked when teams get decimated by injuries.

Last weekend was particularly tough when the league’s best defender — maybe it’s best all-around player when Watt is healthy — and a headline-drawing receiver are lost until 2018. Kansas City receiver Chris Conley tore his Achilles tendon as national TV cameras focused on him.

In their loss to Baltimore, the Raiders resembled the Giants by losing four players: Marquel Lee (ankle), Jamize Olawale (concussion), Corey James (knee) and Antonio Hamilton (knee). Oakland had to think about using starters on special teams, usually a no-no in non-playoff games.

Even before the preseason ended, Patriots Super Bowl hero Julian Edelman and Dolphins quarterback Ryan Tannehill, just to name two, were gone for the season.

Then Greg Olsen, the Panthers’ outstanding tight end, was lost, as were Ravens guard Marshal Yanda, and Eagles running back Darren Sproles. All players worth watching.

At least there is this for Houston and New York fans: the Astros vs. the Yankees. Until one of them knocks off the other in the baseball playoffs.