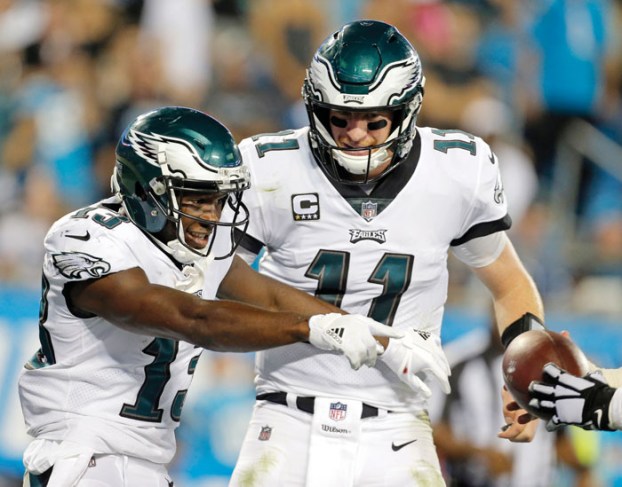 AP Photo/Bob Leverone ... Philadelphia Eagles’ Nelson Agholor (13) celebrates his touchdown catch against the Carolina Panthers with quarterback Carson Wentz (11) in the second half of Thursday night’s NFL game in Charlotte. The Eagles won, 28-23. Carolina Panthers’ Cam Newton (1) dives for the end zone as Philadelphia Eagles’ Patrick Robinson (21) and Rodney McLeod (23) defend in the second half of an NFL football game in Charlotte, N.C., Thursday, Oct. 12, 2017. Newton was ruled down before the goal line. (AP Photo/Mike McCarn)

CHARLOTTE (AP) — Carson Wentz continues to show poise beyond his years in his second NFL season.

Wentz threw for 222 yards and three touchdowns against one of the NFL’s top defenses, and the Philadelphia Eagles beat the Carolina Panthers 28-23 on Thursday night to improve to an NFC-best 5-1.

The Eagles turned two interceptions deep in Carolina territory into 15 points. Wentz teamed with Zach Ertz on two touchdown passes, and LaGarrette Blount scored on a 2-point conversion run for an 18-10 lead in the third quarter. Wentz added a 24-yard scoring pass to Nelson Agholor in the fourth quarter.

“He’s a great leader of this football team, even in his second year,” Eagles coach Doug Pederson said. “Guys really respect the way he plays. It’s exciting to see that.”

The first two interceptions came inside Carolina’s 20, but weren’t Newton’s fault. He was hit by Fletcher Cox as he released one pass, and running back Jonathan Stewart bobbled another pass resulting in a pick. Newton’s third interception — by Jalen Mills with 3:06 left — ended a chance for the go-ahead score.

Carolina had one last shot to win, but turned it over on downs at midfield.

“It’s disappointing because we had the opportunities,” Panthers coach Ron Rivera said. “We can’t kick field goals and beat good teams. We can’t turn the ball over and not take it away.”

Panthers middle linebacker Luke Kuechly was placed into the concussion protocol after his body crumpled following a collision with Eagles pulling guard Brandon Brooks. Kuechly missed nine games over the past two seasons with two concussions. All of the Eagles’ touchdowns came after Kuechly left the game late in the second quarter.

Panthers cornerback Captain Munnerlyn said it won’t be easy to replace Keuchly, adding “Luke is a big part of what we do.”

Added defensive tackle Kawann Short: “You saw a quick prayer, but then the game has to go on.”

Newton gave the Panthers a 10-3 lead on his 51st career touchdown rushing in the second quarter. He kept the ball on a read option and juked cornerback Rasul Douglas on the 16-yard run.

Douglas get revenge on Carolina’s next possession, intercepting Newton’s pass after Cox crashed into Newton as he was throwing, causing the ball to float high into the air.

EAGLES COX RETURNS: After a two-game absence due to a calf injury, Fletcher Cox returned and was a dominant force for the Eagles. Along with the tipped pass on Newton’s interception, he also had a sack and two quarterback hurries. “There’s no way I could sit him tonight,” Pederson said. “It was too important to him.”

NO RUNNING GAME: If it hadn’t been for Newton , the Panthers would not have had any running game to speak of against the Eagles. Newton ran for 71 yards and the touchdown, but running backs Jonathan Stewart, Christian McCaffrey and Fozzy Whittaker were limited to 1 yard on 13 carries.

“We have a lot of things to look at. We really do,” Rivera said of the running game.

BLOUNT POUNDS AWAY: The bruising Blount didn’t find the end zone for a touchdown, although he did score on a 2-point conversion after the Panthers defensive tackle Star Lotulelei jumped early on an extra point attempt. That prompted coach Doug Pederson to go for two. Blount finished with 67 yards on 14 carries.

PEPPERS’ MILESTONE: Julius Peppers needed one sack to become the fifth player to reach 150 since they became an official statistic in 1982. The 37-year-old Peppers didn’t waste any time reaching it, sacking Wentz on the first drive of the game and forcing a fumble.

LINEUP CHANGE: Panthers cornerback Daryl Worley was benched in the first half for Kevin Seymour.

Panthers: Aside from Kuechly’s injury, Whittaker was carted to the locker room in the first quarter with a right ankle injury and did not return.

Panthers: At the Chicago Bears on Oct. 22.

CHICAGO (AP) — Stephen Strasburg gave Washington everything he had, and it was more than enough. So much for all... read more