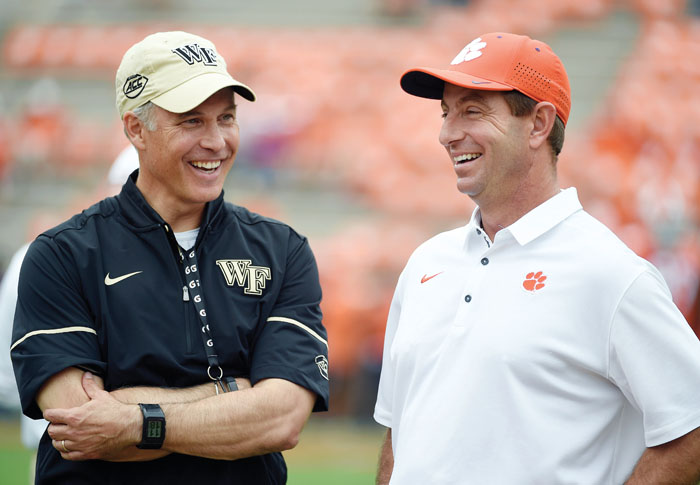 CLEMSON, S.C. (AP) — Kelly Bryant smiled and joked after No. 2 Clemson improved to 6-0 for a third consecutive season with a 28-14 victory over Wake Forest on Saturday. Whether he”ll remain smiling later in the week is anyone’s guess.

Bryant sprained his left ankle in the third quarter. He tried to jog a bit on the sidelines after coming out, but with Clemson up 21-0, no one on the Tigers wanted to risk more serious damage.

Bryant, the junior who’s capably taken over for All-American Deshaun Watson as offensive leader, will get checked by doctors Sunday and go through treatment all week to try and get ready to face Syracuse on Friday night.

How that goes will determine if he’ll play, Clemson coach Dabo Swinney said.

“We’ve been repping three quarterbacks all fall,” the coach said. “Who’s ever ready to go Friday will go. We’ll see what happens.”

Bryant threw for 200 yards and a touchdown before coming out. He also rushed for 39 yards. Backup Zerrick Cooper was 2-of-6 passing for 16 yards while third-string Hunter Johnson completed all five of his passes including a 13-yard TD throw to tight end Cannon Smith.

Swinney thought Cooper and Johnson both did well to keep the Tigers moving. Each might have to do a bigger job come next week.

Bryant walked in a black, protective boot — complete with an orange Tiger paw logo — around his left ankle. “Got the win so I’m, great,” Bryant said with a smile.

He said he got hit on his ankle on Travis Etienne’s 1-yard TD run.

Bryant’s 28-yard scoring pass to Deon Cain got the Tigers started. Etienne, a freshman, had 67 yards rushing along with his touchdown. Adam Choice added a rushing TD and Cannon Smith added a 13-yard touchdown catch from third-string passer Hunter Johnson.

Clemson’s defense continued to show why it’s among the country’s best. The Tigers held Wake Forest scoreless the 51 minutes until Scotty Washington’s 16-yard touchdown catch spoiled the shutout. Clemson has held opponents scoreless in 15 of 24 quarters this season.

Wake Forest fell to 0-22 against opponents who entered 5-0 or better.

“We’ve still got to execute at a high level,” Wake Forest coach Dave Clawson said. “I don’t like to use this as a measuring stick. It’s a one week season and we didn’t measure up this week.”

Clemson looked like it might crush the Demon Deacons its first two drives went for quick and easy touchdowns in the game’s opening nine minutes. The Tigers, though, managed only 134 yards the rest of the half. No matter, as Clemson’s defense did what it usually does and kept the Demon Deacons in check most of the way.

“I think everyone’s buying in, committing to the grind,” Clemson linebacker Dorian O’Daniel said. “We’re far from perfect and we’re far from where we can be as far as our potential.”

Wake Forest: The Demon Deacons are certainly improved, but not yet ready to take down the Tigers. Wake Forest failed on several key chances to make things closer as normally reliable Mike Weaver (he opened the season 10-of-10 on field goals) missed two against the Tigers.

Clemson: The Tigers’ offense has been tailored to Bryant’s penchant to run and its strong quartet of running backs. If Bryant’s injury is significant, Clemson might have to open things up with strong armed backups Zerrick Cooper and Hunter Johnson.

Wake Forest had its most productive period at the end, gaining both its touchdowns and 136 of its 336 yards of total offense in the fourth quarter. Demon Deacons coach Clawson did not want to make this a tale of a team hanging tough. “We kept playing hard, we kept competing. I think that’s a good habit,” he said.

It’s looking more and more like a two-team race to the national championship game once more. Clemson is a solid No. 2 behind top-ranked Alabama and has a defense that can withstand problems and changes on offense.

Clemson has won 20 straight over ACC Atlantic Division opponents, a streak that dates back to a 23-17 overtime loss at Florida State in 2014.

Wake Forest quarterback John Wolford did not play because of a left shoulder injury. Sophomore Kendall Hinton opened the game for the Demon Deacons. Hinton started three games previous in his college career. Given the week off, Clawson want confident that Wolford will be back for the Demon Deacons next game in two weeks. Clawson said if Hinton had gotten hurt, Wolford could’ve seen action.

Wake Forest takes next week off before heading to Georgia Tech on Oct. 21.

Clemson has a short week as it goes to Syracuse on Friday night.