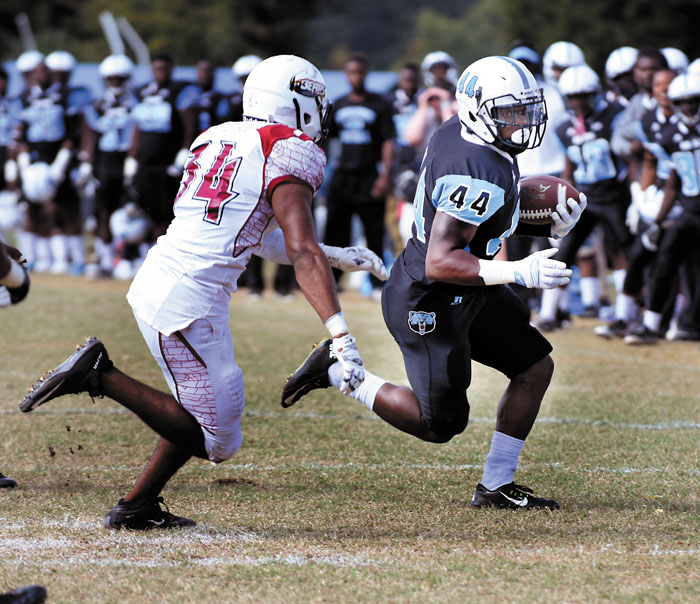 Just let that sink in. That’s a lot of touchdowns.

Ruffin, now a 22-year-old sophomore at Livingstone, had his best collegiate game last Saturday in a 25-12 loss at Chowan. He gained 93 yards on 16 carries, including a 7-yard TD run. Ruffin also had four catches for 32 yards.

Ruffin will help lead the Blue Bears into their first home game this Saturday evening, as Livingstone (0-4)  hosts Virginia State (3-0) in the West End Classic. Game time is 6 p.m., at Alumni Memorial Stadium.

Ruffin is just happy to be playing college football again, an opportunity he wasn’t sure would come a few years ago.

He knew nothing but success in high school. Ruffin was a fullback on the 2010 Salisbury team that won the 2A state championship. Then as a starting halfback in 2011 and 2012, he ran for 2,963 yards and all of those TDs, as the Hornets went deep into the playoffs each season. His yardage total ranks fourth all-time at Salisbury and 16th in Rowan County history.

Of course, there were other great players during Ruffin’s time at Salisbury, but he was a big part of teams that compiled a record of 35-9.

So Ruffin headed off to Appalachian State in the fall of 2013, knowing that he would red-shirt the first year but was excited about the future.

But it didn’t work out in Boone, and Ruffin had no one to blame but himself.

“After red-shirting in the fall at Appalachian, I was looking forward to earning a scholarship the next spring,” said Ruffin. “But I didn’t prioritize correctly and that was all my fault. I was running a 4.4 flat then and my focus was on football and trying to get into the starting backfield. I was too focused on football and not enough on going to class. I got behind in my academics and it was all on me.”

He returned to Salisbury and then enrolled at Livingstone last year.

“Having time off from school and football makes me appreciate the opportunity here with Livingstone and Coach (Daryl) Williams that much more,” said Ruffin. “I’m all in with the team. It’s a blessing for me to be back on the field … I didn’t know if I’d get that chance again. I plan to make the most of it.”

Ruffin played sparingly last year as he was knocking the rust off and starting running back Jarius Richardson was having a solid year. Richardson is a senior this season, but an ankle injury has sidelined him and led to Ruffin’s opportunity last Saturday.

“I had to learn the system last year and didn’t get much playing time,” recalls Ruffin. “But now, being comfortable in the offense, I can just run hard and follow the blocking. It felt good to be out there and just do my job.”

Running hard is something he learned at Salisbury, from teammates like Romar Morris and John Knox, and head coach Joe Pinyan.

“Coach Pinyan instilled in us how to deal with adversity,” said Ruffin. “He coached us to contest every down, every play. If we happened to be behind at halftime, we knew how to fight back in the second half. And Romar and John taught me that you go hard every play, and don’t let one bad play get you down. I still try to run hard every single play and carry that thought process on.”

Williams has seen that fight in Ruffin’s play, maybe to a fault.

“Ruffin runs so hard and he takes a lot of  hits, because he won’t go down,” said Williams. “Even when his momentum is stopped and they’re holding him up, he won’t go down and sometimes takes that last, hard hit. But we’re really pleased with how he is coming along.”

“For us, Justin was a very bright young man and a phenomenal football player,” said Pinyan. “Anytime he touched the ball, he could go the distance. He was a gamer. We’d run a play expecting four yards, and he might go 64.

“He’s a super kid and I’m glad he is back in school at Livingstone,” continued Pinyan. “Sometimes, larger universities aren’t for everybody. He may be where he needs to be and I believe he can do some great things there.”

Interestingly enough, Ruffin’s parents met at Livingstone and are graduates — Judith McClellan, of Salisbury, and the late Tirece Ruffin.

“I’m just happy that Coach Williams let me on this team and let me be a part of this program,” said Ruffin. “I have a huge support group here — my mom, girlfriend and family. I feel like the whole city is behind me. I’m just blessed to still be playing football and I want to play well for everybody who supports me.”

Tirece Ruffin died of a heart attack at the young age of 38, just before Justin’s junior season at Salisbury. Justin switched his uniform to No. 44, the same number his dad wore at Bertie High School in Windsor, N.C.

Justin’s father also played for the Blue Bears and returned to Bertie County after graduating from Livingstone in the mid-1990s. According to Justin, he was an English teacher and defensive line coach at Bertie High and a volunteer fireman in the Kelford community of that county.

Justin also honored his father by wearing No. 44 at Livingstone last season, but this year, switched to No. 1.

“Just something new,” said Ruffin of changing his number. “Coach Williams asked if I wanted to change this year and when saw the No. 1 jersey, I wasn’t going to complain about it. I had never had a single digit number before.”

There’s no mistake that Richardson, when healthy is still Livingstone’s “go-to” back. But Ruffin has learned patience and should have a chance to be the starter in 2018 and 2019.

“I’m 22 now, another reason that I take it so seriously,” said Ruffin. “I’m an older guy on this team but it’s another opportunity. I’m old enough to be a senior but I’m just a sophomore on the field, so I’m still looking ahead.”

Ruffin is a sports management major and hopes to play professional football at some level after graduation. When he does stop playing, Ruffin said that he’d like to be a strength and conditioning instructor and open his own gym.