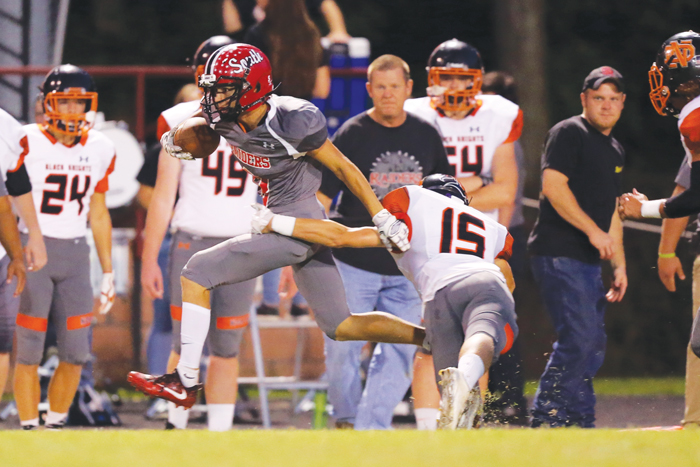 LANDIS —The truth hurts — and it was delivered loud-and-clear by visiting North Davidson.

Its victim Friday night was winless South Rowan, which managed only 54 yards total offense in a 49-0 CCC beatdown.

“All of it,” South coach Daniel Yow answered when asked how much of the onslaught he anticipated. “I’m not going to lie to you. We knew on film they were a good team. We knew they’d be hard for us to block and hard for us to stop. We figured it would be a classic David vs. Goliath match and just wanted to fight to the very end.”

Yet South (0-5, 0-3) offered little resistance against the Black Knights (4-1, 2-0), who scored seven first-half touchdowns and finished with 457 total yards. The guests scored three times in less than four minutes to open a 21-0 first-quarter lead.

“We were prepared,” winning quarterback Josh Sicigano said after passing for 233 yards and an unsuspecting touchdown on the last play of the first half. “We worried not so much about them, but about running our plays.”

Things went wrong in a hurry for South. Its offense was penalized for false starts on three consecutive plays on its first possession. Its defense tackled like a flag football team and clearly wasn’t ready for what North was bringing.

“We kind of let the game get in our heads,” said two-way lineman Patrick Brooks. “We came out flat, had a few bad plays and allowed them to get into scoring position. That first half was just rough.”

A game that started poorly only got worse when North scored four more TD’s in the second quarter.

“It was like an avalanche effect,” said SR quarterback Brett Amburn. “The more they piled up the yards, the more our morale dropped.”

The guy piling up most of the yards was ND’s T.J. Boyce. The 190-pound senior back unlatched the gates to the end zone and let himself through five times in the first 17 minutes.

“He’s almost the whole offense,” said Sicigano, whose 5-yard TD run gave the Knights a 42-0 lead midway through the second period. “He can run the ball, catch the ball, block the ball. He’s a beast of nature.”

Yow agreed. “One of our points of emphasis this week at practice was to tackle a little bit lower,” he said. “At times we did it, but when we didn’t (Boyce) exposed us. He’s a great athlete and a hard runner. He exposed us every time we made a bad decision on our tackling.”

Boyce ran like he was dipped in grease, finishing with 149 yards on 15 carries. He also caught a third-quarter pass for 15 yards. He opened the scoring when he turned a trap play into a 25-yard touchdown run with 5:26 remaining in the first period. Following a three-and-out by South’s offense, he skirted around the left side on a 12-yard score. And with just 1:47 to play in the opening quarter, he took a handoff and scored on a 1-yard leapfrog over the offensive line.

Boyce scored two more touchdowns and the second quarter unspooled — the first on an upright, 10-yard stroll into the end zone and the next when he found a seam up the middle and crossed from 12 yards out. “He was able to get upfield and make defenders miss him,” Brooks said.

After Sicigano’s touchdown ensured a running clock in the second half, North scored its final TD when South least expected it. The Raiders — and everyone in the stands — figured the Knights would take a knee after taking possession on their own 21 with 7.1 seconds left in the half. Instead, wideout Jacob LaFlesh caught a short pass on the right side and turned it into a 79-yard score.

“When we have opportunities like that, we work on plays we need to work on,” Sicigano said after ND used the rest of the game as batting practice. “We worry about us and what we need to do. It’s almost like we’re preparing for another game.”

And by now Yow realizes it’s either going to be a long season for the Raiders — or a longer one.

“We know we’re a lot better than what we’re showing on the scoreboard,” he said. “But this was the first time all year we didn’t have the production numbers on offense. The numbers don’t lie. We’re just not scoring enough.”

NOTES: North’s Jackson Perrell made one of the game’s biggest plays when he raced 29 yards for a first down on a first-quarter fake punt. … South finished with minus-20 yards rushing. It’s deepest penetration came against ND’s second string in the fourth period, when it reached the Knights’ 29-yard line. The drive fizzled when Amburn threw his second interception. … North hosts West Davidson and South visits West Rowan next Friday.