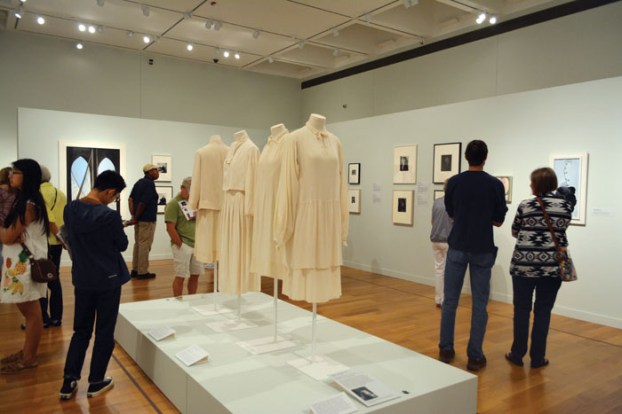 For the first time, the Reynolda House exhibit includes Georgia O’Keeffe’s clothing with her artwork.

Artist Georgia O’Keeffe was ahead of her times; exhibit at Reynolda House shows how

WINSTON-SALEM — It’s remarkable that a woman born during the Victorian era could be considered modern in 2017. Georgia O’Keeffe is just such a woman.

O’Keeffe was born in 1887 and died at age 98. In between, she became known for the bold artwork of her large-scale, signature flowers; dramatic cityscapes; and stark images of the desert Southwest.

In celebration of the 100th anniversary of Reynolda House — and its 50th anniversary as a museum — the exhibition “Georgia O’Keeffe: Living Modern” is on display through Nov. 19. For the first time, some key pieces of O’Keeffe’s wardrobe — icons themselves — are on display, creating a more complete picture of an artist clearly ahead of her time.

O’Keeffe’s well-known flowers make up only a small part of the exhibition, which is both in the Babcock Gallery and in four upstairs rooms of the house. The show is a look at O’Keeffe’s early life and work and the clothes she wore throughout her life.

O’Keeffe was a no-nonsense type of woman — even androgynous in some photographs. Her husband, photographer Alfred Stieglitz (she never took his name), made many images of her over the years. So did Ansel Adams, whose popularity paralleled O’Keeffe’s. Her wardrobe includes comfortable, monochromatic pieces that might have seemed severe or even scandalous for the time but would be perfectly fashionable today.

O’Keeffe took robes that models used in between showing runway designs and made them her own. She paired them with Ferragamo flats, which are expensive even today. They have their own room in the house, which also houses her black-and-white wrap dress. She was frequently photographed in this outfit in her later years.

In another room, black and white kimonos are paired with an abstract painting in yellow, green and orange. A third room pays homage to her signature black suits, another style she also embraced late in her life.

In the main gallery, an abstract painting with a deep, black “V” in the middle is juxtaposed beside one of O’Keeffe’s Pucci dresses in the same style. It’s fascinating to discover how O’Keeffe’s artistic style carried over into her wardrobe.

This space also contains monochromatic cityscapes that manage to be feminine despite their architectural lines and paintings from O’Keeffe’s time in New Mexico. She began to visit this part of the country in 1929 and moved there in 1949, three years after her husband’s death.

Paintings sometimes tend to change depending on how you view them. An example is “The Mountain,” a New Mexico landscape that looks like a melting face — a la Dali — from a distance.

Reynolda House is one of only three venues for this unusual show and the only location south of New York. For more information about “Living Modern” and to purchase timed tickets — even on a sell-out day, the exhibit is not crowded as it’s so spread out —visit www.reynoldahouse.org or call 888-663-1149.

GRANITE QUARRY — The morning is quiet and clear when Terry Holt takes a group of eighth-graders into the woods near Old... read more