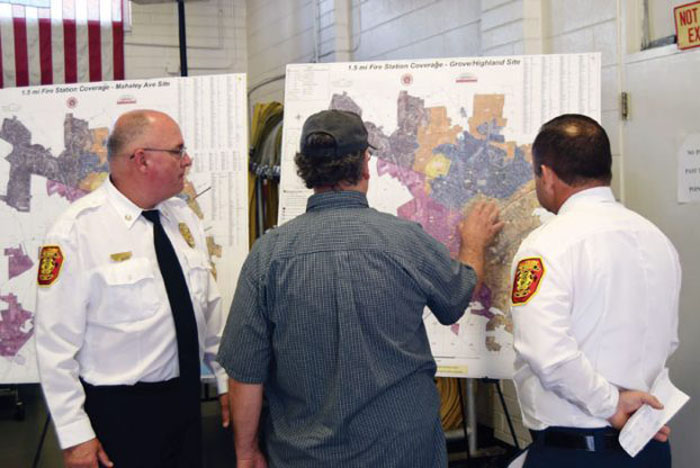 SALISBURY — In a 3-1 vote, the Salisbury City Council decided Tuesday to rezone several lots on Mahaley Avenue to allow a new Fire Station No. 3 to be constructed there.

The site has been a contentious topic for more than a month because people who live next to the proposed station location have opposed the project, saying it would lower their property values and cause noise disturbances.

Even after more than two hours of discussion among station architect Bill Burgin, Fire Chief Bob Parnell and council members, members of the council said the decision was a difficult one.

“This is not an easy job. We do take your concerns seriously,” Councilman Brian Miller said. “Nobody wants to damage your quality of life, certainly not the folks who are sitting here. Having said that, though, I do see this as a superior site.”

Councilman David Post recused himself from the vote because he lives near the location.

The site — which would be in the 100 block of Mahaley Avenue, next to Dest Family Dentistry — was one of seven locations that the city looked at when deciding where to move Fire Station No. 3.

But Burgin and Parnell said that none of the other site options could match the one on Mahaley Avenue — known as the “Bunker” — in terms of closing gaps in response times.

“I’m not offering you the perfect site, and I know that,” Burgin said. “I admit that we’re affecting residential (at the Bunker site). But we tried to pick a site that affected the fewest people.”

The current Fire Station No. 3 location was not an option considered, Burgin said, because the expense of refilling the lot with better quality soil would be nearly cost-prohibitive.

Council members asked questions for nearly an hour about whether the station would blend aesthetically with the rest of the neighborhood, whether wildlife would be significantly affected and whether any other changes could be made to reduce the impact on Lily and Corriher Avenue neighbors.

Burgin said that his orders from Parnell were to “in all cases do anything you can to be a good neighbor.”

With that in mind, the council voted to rezone the Mahaley Avenue lot with several conditions attached.

Those conditions include adding a 15-foot vegetative buffer along the back of the property line, cutting off a corner of the station’s retention wall to increase distance from neighborhoods and keeping streetlights shorter than 25 feet.

Blackwell said she came into the meeting thinking that she would probably lean in favor of the concerned Lily Avenue residents.

“In the course of (Burgin’s) discourse tonight … he brought me to realize that there are many more houses than the dozen or so that you guys live in that stand to be affected much more greatly than you guys do,” Blackwell said. “You are important, but so are they.”

Construction of the new fire station is not set to begin for another three years.

But Burgin said it is important that the city buy the property because, in the past nine months, three properties that had been viable options for the relocated station were bought by someone else.

• The council authorized a $183,111 purchase of an integrated video and audio capture system.

Post brought up that the city is only in its first quarter and has already taken $300,000 from its general fund.

Blackwell said the city has been “squirreling away” money for the past several years specifically for this type of investment.

The council voted unanimously to approve the motion.

One involved the demolition of the granite service station at 201 E. Innes St. The item was removed by the applicant, Healthcare Management.

The company decided that, instead of demolishing the building, it wants to try an alternative proposed by the Historic Salisbury Foundation.

Details of the alternative plan are not yet known.

The other agenda item involved awarding a contract for the construction of a Newsome Road extension between Innes Street and Faith Road.

Alexander said the city did not get enough bids for the contract and would bring it up again at a later meeting.

• Diane Gilmore was sworn in as the new city clerk.

Gilmore has worked with the city for 18 years.

Her two daughters, Amber and Alyssa, held the Bible for Gilmore as she repeated, with her hand on the text, an oath promising to faithfully fulfill her duties.