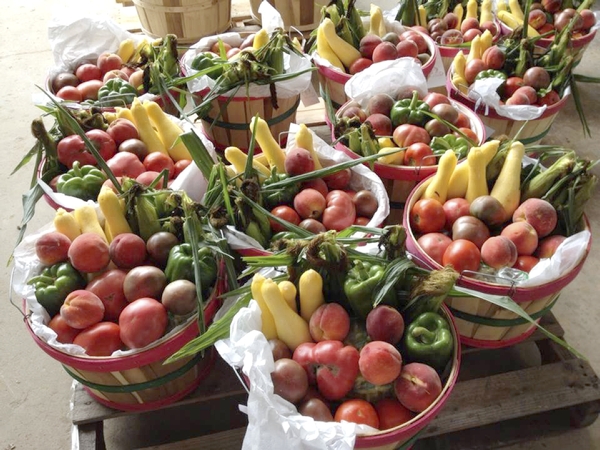 A sampling of produce from David Correll, one of the farmers at the Salisbury Rowan Farmers Market.

Time was, we ate liver. We didn’t like it, but we did it.

They never asked if we liked it or if we wanted it. They never gave us a choice. You had to open your mouth wide to show you had swallowed it or fed it to the dog under the table or spit it under the porch steps. They tried to disguise it as “Liver Liesianne” or hidden under onions.

There was the obstinate kid who chewed on a lima bean for 30 minutes until his father conceded. Some textures just don’t suit your pallet. You decide.

Brave was the man who ate the first oyster.

Thank heavens for fast food joints. The choices are myriad. The oversized glossy menu boards with sauces dripping over and crowned with foreign cheeses on the menu board all say “pick me.” And they don’t know why we are so plump. Like laboratory rats, we return to the “trough” for “I think I’ll try this next.” What’s the difference when your parents force fed you with “Try it, you’ll like it,” followed immediately with, “If you don’t eat it, you’ll go to bed with no supper.” The family provider often resorted to punishment.

This was all before the choices that expand daily at downtown diners, Mexican, Cuban, Bangkok, Wong’s Chinese, Palermo’s pizza, wild Brazilian Santos, seafood and plenty of portions of pork at every intersection across from a church. We need a food critic on call.

Not unlike those crazy eating contests, the feeding frenzy begins again every late afternoon. What do you want to eat tonight? Well, where do you want to go? Who can eat the most, the fastest? Wash that down with too much beer and you’re a perfect example of what Americans do best. Eat more. Ms. Beard used to say they needed to charge a tax on tourists in Blowing Rock by the pound.

No problem downing those weird non-foods on the TV survivor programs. We ate a few bugs riding bicycles at night, but chocolate spiders or private parts, no.

And when you’re too full to eat “another bite,” add slushies, funky monkey chills, Frosties, donuts, raspberry Icies, Creamsicles or anything on a stick “to go.” Grandmother would not approve of eating on the streets. Well, maybe one piece of candy from the 15,000 choices at the Candy Shoppe or gum you can hide until you get to the movie seat. What good is gum if you can’t swallow it? Does it really get stuck in your appendix? You can’t gain weight by looking or smelling or inhaling or drooling.

On the checkout counter, at the Dixie Diner, T & F, Blackwelders, the Lamp or any “greasy spoons,” there was always a big gallon jar of dill pickles or maybe pickled pork knuckles or eggs or even the delectable, irresistible delicacy of chicken feet, all ready for a good finger-licking turnabout.

We thought Harvard beets and collard greens were bad enough at school, but they gave us vinegar in a little cruet as if that made it taste “better.” Thanks to poor Richard’s Almanac we learned, “Hunger never saw bad bread,” and we had the “guvment” cheese and the picture of the food pyramid with bread at the bottom.

Now the girl at Dr. Nagy’s office says she doesn’t know anybody who still drinks the spinach and kale juice floats for lunch. Another fad diet, gone.

What you liked was overruled by what you needed or tasted good or better still what was “good for you.” Who decided?

Frugal German settlers at the Old Stone House made their own kraut, souse meat, liver mush and hog brains. Supply and demand.

Restaurants should give you what you want. Without asking, no waste, no wait, no wrong orders. Well, maybe a choice of A or B. No waitress who says “Who had this?” when we have never seen it before in our lives. How do we know what it looks like?

They say 50 percent of deli food is wasted just so we can casually pass by, turning up our noses.

Turns out, liver is good for you. Radiant Life says it is nutrient dense and keeps our brains healthy with foliates, vitamin A, and iron and copper. Gram for gram, more nutrients than any other food. So what you’re trying to tell me is, once and a while, what tastes bad at first turns out the be good. Li-Chi, handbook of ritual in 202 B.C., even goes so far as to list liver as one of the eight delicacies. Your guess as to what the other seven are. The Ershoff study found drowning rats had 10 times more stamina with liver powder.

We all become addicted to food. Tell me about it; just look around. The newspaper column doctors, Ko and Gazier, include sorbitol, found in apples; mannitol ,found in asparagus; and xylitol in lettuce and strawberries as non-addictive sugars. How can we stop craving pizza, pork chops or pinot noir? When does gluttony begin to be a sin? If the “L.E.O. on the scene” was able to ask “Why?” to drug users, what would be their reason for their need to do drugs? “I liked it.” Obviously not family, friends or life itself.

If they were told not to do it ever again, would they give their promise to the judge? A man’s word means nothing these days. Sad. Probation only prolongs a problem.

If they had been made to eat those green beans or forced to eat liver, would it make a dent in their narcotic-induced brain? What can nice, well-meaning folks sitting around a conference table know or do to combat overdoses? Do we just let them go or line them up for the firing squad like in China? A threat to society? How do you get people to change their minds about what’s good for them? It ain’t chopped liver. It’s for the rest of your life. Try it, you’ll like it.

Clyde, who has dropped his last name, is a Salisbury artist.

Time was, there were critters out there. In the woods, right behind the house, every once and a while, you... read more