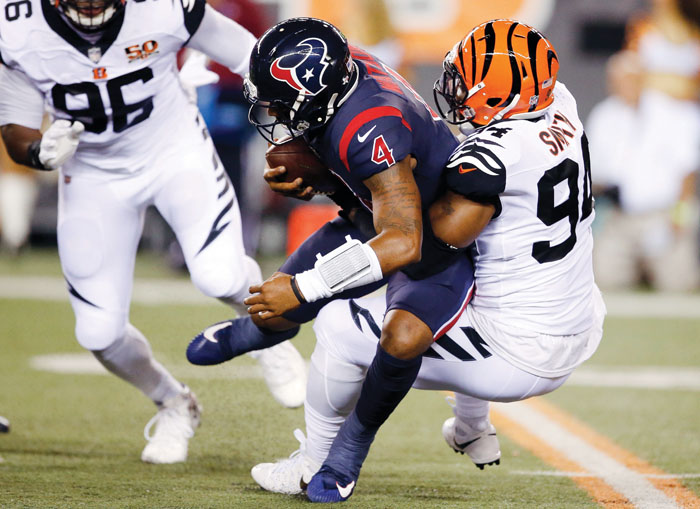 CINCINNATI (AP) — Deshaun Watson ran 49 yards for a touchdown in his first NFL start and led the Houston Texans’ depleted offense to a late clinching field goal in a 13-9 victory over the Cincinnati Bengals on Thursday night.

Watson showed up in a black tuxedo for his first NFL start — it was his 22nd birthday, no less — and showed the flash that helped him lead Clemson to a national title. He avoided the rush and ran 49 yards for a 10-3 lead late in the first half, dashing past befuddled defenders.

The Texans (1-1) got the most out of their depleted offense, and then let their defense do the rest. The Bengals (0-2) have failed to score a touchdown in their two games to open a season for the first time in their 50 seasons.

Watson led a 13-play drive that set up Ka’imi Fairbairn’s 42-yard field goal with 1:56 left. The Bengals got the ball two more times, but failed to cross midfield.

Cincinnati lost to the Ravens 20-0 at Paul Brown Stadium on Sunday, the first time in their history that they opened the season blanked at home. Andy Dalton threw four interceptions and lost a fumble.

The Bengals managed only three field goals by Randy Bullock on Thursday. Dalton fell to 1-6 career against the Texans, including a pair of playoff losses.

Watson directed an offense missing three tight ends because of concussions, along with receiver Will Fuller V and guard Jeff Allen. The Texans kept it simple, and Watson avoided the game-turning mistake despite heavy pressure from the Bengals.

The Bengals became the first team that opened the season with five scoreless quarters since the 2009 Rams, who went 1-15, according to ESPN Stats.

They thought they finally had a touchdown when Tyler Eifert caught a pass from Dalton in the end zone in the third quarter — the videoboard broke into a touchdown song — but the tight end had stepped out of bounds before making the catch, nullifying it. Cincinnati settled for its third field goal.

The Texans lost two cornerbacks. Johnathan Joseph hurt his right shoulder while making a tackle in the first half and didn’t return. Kevin Johnson hurt his left knee in the third quarter and was out. The Texans already were missing LB Brian Cushing. He’s in the NFL’s concussion protocol and has been suspended 10 games for violating the NFL’s policy on performance-enhancing substances.

Bengals: CB Adam “Pacman” Jones returned from his one-game NFL suspension for an offseason conviction and hurt his right elbow in the fourth quarter, but returned and finished the game.

The Texans play at New England. They’re 1-8 against the Patriots, including a 34-16 playoff loss last season.

The Bengals play at Green Bay for the first time since 2009. They’ve won three straight against the Packers, two of them at Paul Brown Stadium.

PEPPERS SHRUGS OFF UPCOMING MILESTONE, SAYS HE WANTS TO WIN

CHARLOTTE (AP) — Julius Peppers is on the verge of joining some elite company — although the 37-year-old defensive end seemingly couldn’t care less.

Peppers picked up a half-sack in his first game back with the Panthers last Sunday and now has 144 for his career, inching closer to joining Bruce Smith, Reggie White, Kevin Greene and Chris Doleman as the only players in NFL history with 150 career sacks.

Peppers shrugs his wide shoulders and rolls his head to the side at the thought of potential milestone.

“I’ve never been into all of that statistical stuff,” Peppers told The Associated Press on Thursday. “It’s a big deal, there’s no question about it. That’s big time. But I just don’t get caught up in that.”

Peppers is more focused on securing a Super Bowl ring, something that has eluded him the past 16 seasons.

“Sometimes we get defined by rings and things like that. You want to have it on the resume,” Peppers said. “But at the end of the day it’s about the relationships, the people that you come to work with. That’s the important thing. But yes, we do want to get one.”

Peppers returned to his native North Carolina this offseason in hopes of doing just that.

He even agreed to take a lesser role, coming off the bench for the first time in career.

The nine-time Pro Bowler and three-time All-Pro is backing up Charles Johnson as part of a defense that regularly rotates its defensive ends. Peppers played just 47 percent of the defensive snaps against the 49ers, a number that would have been woefully low and unheard of when Carolina first drafted him No. 1 overall in 2001.

Peppers’ only tackle against the 49ers came on a sack that he shared with defensive tackle Star Lotulelei, but he did add two quarterback hurries and was disruptive at times.

His next opportunity comes Sunday against the Buffalo Bills.

“I’m here to win,” Peppers explained. “Everything else is secondary. How many snaps (I play), even the stats and things like that, all of that is secondary. We just want to win. That’s what we want — to win.”

Peppers left Carolina after the 2009 season following a contract dispute, and went on to play for the Bears and Packers.

“Guys like him who have had such a great career like that and have a chance to come back home, all they want to do is win,” Rivera said.

Even while he was away, Peppers was never forgotten.

It took seven years, but it finally happened.

To the players it was a significant addition even with Peppers in the twilight of his career, and a signal the Panthers were pulling out all of the stops to win the Super Bowl.

Three-time All-Pro linebacker Luke Kuechly doesn’t get star struck by much, but even he acknowledged that seeing Peppers for the first time up close in the locker room was “pretty cool.”

“You grow up watching him and once I got here as a rookie everybody talked about, ‘Maybe we can get Julius back,’” Kuechly said. “Now we finally got him back. He still has a ton of ability and he is hungry to be successful and win.”

Panthers safety Kurt Coleman and others marvel at the size of the chiseled 6-foot-7, 295-pound Peppers and how he’s remained in such great shape.

“I want to eat some of his Wheaties,” Coleman said.

Coleman called Peppers a “gentle giant.” He said while Peppers has a quiet demeanor, “you can walk up to him and poke him but you know better.”

Peppers said he’s embraced with open arms by the organization and his teammates and it “it feels like I never left.”

“These guys are reliable, dependable teammates,” Peppers said. “You can count on these guys. Not that I couldn’t count on anybody else. It’s just a comfort level I have here in this locker room.”

So Peppers is happy.

As for how much longer he wants to play in the NFL, he’s keeping that to himself.

“I want to play this weekend,” Peppers said with a laugh.