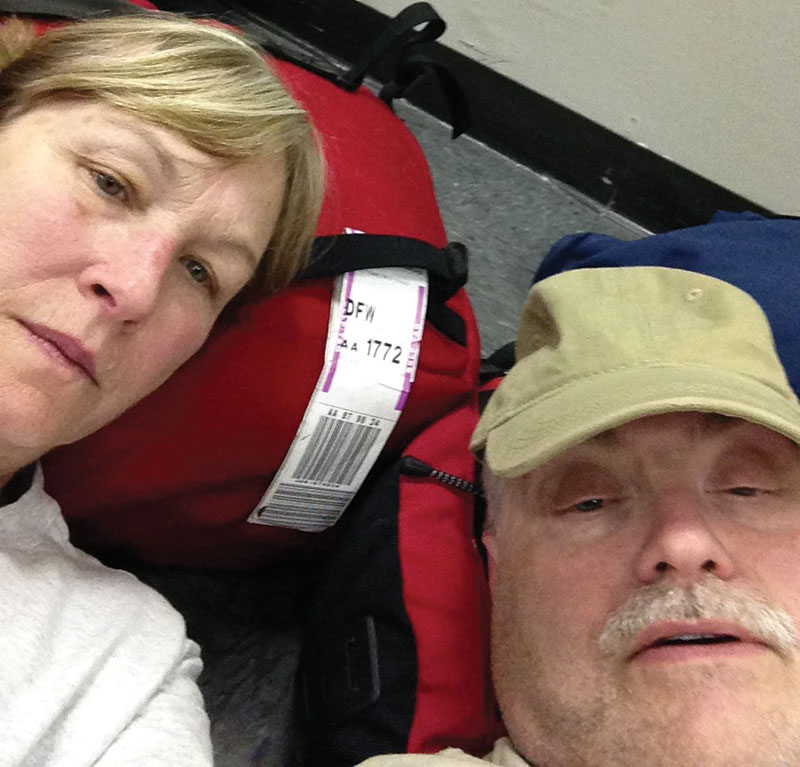 Photo courtesy of Tim Fraley This photo of Donna and Tim Fraley was taken on their ninth wedding anniversary after they had finished a 20-hour day assisting flood victims of Hurricane Harvey in Houston.

SALISBURY — For two weeks, that other hurricane — the one named Harvey — consumed the lives of Tim and Donna Fraley.

The Mocksville couple spent both Tim’s 58th birthday and their ninth wedding anniversary in Houston. Donna had to close down her dog-grooming business in Clemmons while they were gone, and Tim temporarily left his good-paying job as a nurse at Novant Health Rowan Medical Center.

But their sacrifices were “small potatoes,” Tim says, when you realize they played a role in helping 2,500 patients needing medical attention at the George R. Brown Convention Center in Houston.

The convention center also housed some 10,000 evacuees while the Fraleys were there as part of a 45-member National Disaster Medical System team from North Carolina.

Their team is known as “NC 1-DMAT (Disaster Medical Assistance Team), and the Fraleys have been responding to these kind of  emergency situations for almost 30 years. They were members of the first federal disaster medical team from North Carolina in 1988.

It’s only when they return — the Fraleys came back to their home in Mocksville last Tuesday — that the couple usually have time to breathe and assess what they’ve been through.

“Which is usually followed by, ‘Boy, I really need some sleep,'” Tim says.

Besides running her pet-grooming business, Donna also is a part-time veterinary tech in Statesville. In Houston, she served as an administrative assistant and also helped in tending to roughly 300 uprooted service dogs and pets.

Tim, a nurse who works on the cardiac telemetry ward at Novant Health Rowan, helped in treating all manner of medical needs, from scrapes to heart attacks, strokes and major infections from bacteria in floodwaters.

“I’m happy to work for an organization that supports this,” Tim says. “… Novant and Mr. Armato (Novant president and chief executive officer Carl S. Armato) are so much a supporter of this team. He has never balked on letting us go out.”

The flooding connected to Harvey’s record-shattering rains had closed down six hospitals in the major metropolitan area of Houston, Tim says, and the team set up a well-equipped field hospital inside the convention center.

While they’re with the team, the Fraleys are considered part-time employees of the federal government.

The couple were rostered as part of the “first-out” team from North Carolina. (They must roster for first-out duty at least four times a year.) Tim says they received a notification on the afternoon of Aug. 24 to be ready for deployment to Texas within four hours.

By Aug. 25 they were flying into Dallas for a stay at a hotel and some training. On Aug. 28, they were part of an armed, mile-long ATF convoy that went into Houston with three other teams.

They arrived at 4 in the morning, bedded down briefly, then were taken to the George R. Brown Convention Center. Before noon, they were treating patients.

Nationwide, some 5,000 medical, public health and emergency management professionals are organized into 70 teams. For Harvey, more than 1,110 personnel such as the Fraleys were deployed.

The numbers from Hurricane Harvey were staggering. Up to 51.88 inches of rain fell — a year’s worth of rain in Houston that occurred in five days. About 30 percent of Harris County, where Houston is located, was under water. By Sept. 1, 42,399 people were in shelters.

It was considered a once-in-1,000-years rain event.

The Fraleys put in long hours and sometimes found themselves working different shifts. Typical shifts ran 12 hours, but by the time you factored in cleaning up and getting something to eat, the days were longer.

For food, the team had MREs (meals ready to eat) from the federal government, and they also had access most times to the food — inspected by the health department — that was being served to evacuees. Some 30,000 meals as day were being offered at the convention center, Tim says.

The team members had Army cots to sleep on.

Tim says he was surprised at how upbeat the people the team assisted were.

“So many people were thankful we were there,” Tim says. They generally were happy to be safe and with their families, he adds, but “some of them were pretty down as far as what they would do next.”

The couple met a man who had lost everything and witnessed his emotional reunion with his service dog. “He thought he had lost him,” Tim says.

Tim has been a nurse since 2013 and a paramedic since 1978. He first met Donna in 1988, when he was working with Forsyth County EMS. They were deployed on the same disaster response team when a hurricane hit St. Thomas.

“The name of the hurricane escapes me,” Tim says.

Over the years, they have been part of response teams — not always together — in connection to major hurricanes such as Andrew, Katrina and Sandy and also after the 9/11 terrorist attacks. Sometimes their medical teams also were needed at events such as President Obama’s inauguration and Republican and Democratic national conventions.

The couple’s ninth wedding anniversary fell on Aug. 29. Team members gave them a little party, complete with MREs. On their anniversary and for Tim’s birthday, lunch was delivered to them.

A homemade sign with medical gloves blown up to resemble balloons also was posted for Tim’s birthday.

“It’s the little things that count,” Tim says, adding the team members get to know each other “extremely well.”

For now, the couple are not on the rostered first-out team responding to Irma. But you never know, they might be asked to “back-fill” in later.

If that happens, their contribution will be anything but small potatoes.

‘I love you, and you can’t do anything about…