Livestock owners, farmers can only do so much to prepare 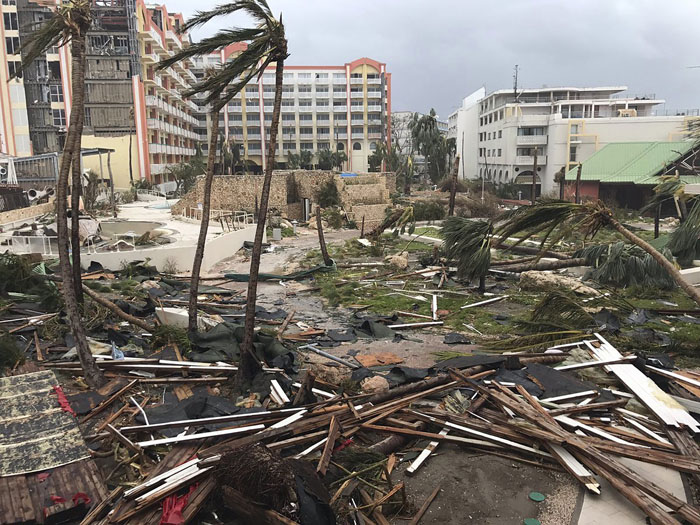 Storm damage in the aftermath of Hurricane Irma in St. Martin. Irma cut a path of devastation across the northern Caribbean, leaving thousands homeless after destroying buildings and uprooting trees. Significant damage was reported on the island known as St. Martin in English which is divided between French Saint-Martin and Dutch Sint Maarten. (Jonathan Falwell via AP)

SALISBURY — Farmers and livestock owners should prepare for the possibility of heavy rain and strong winds with the approach of Hurricane Irma.

While it’s too early to tell what the impact will be in Rowan County, the main thing Rowan Cooperative Extension Agent Morgan Watts is looking out for is high winds and downed trees.

“The most important thing for livestock is to make sure the animals can get to feed, water, hay, and to secure everything that could fly loose,” Watts said.

This is especially true for people who have backyard chickens.

“Those cages are not that heavy,” she said. “… I don’t think we’ll have a lot of flooding, but the wind could blow those cages away.”

Consider putting the chickens in a garage during the storm or making sure the chickens can get up off the ground if water rises, she advised.

Watts said many people don’t have barns for their animals, such as cows, goats or sheep. And they’re not going to evacuate them, with the possible exception of horses.

“We have quite a few horse owners in the county,” Watts said. They will likely look for a safe place to take their horses.

Watts has posted a list of preparations for horse owners on the Rowan County Cooperative Extension Facebook page, www.facebook.com/rowanextension/.

Horses should have vaccines for tetanus and mosquito-borne illnesses such as West Nile virus.

The N.C. Disaster Information Center has a fact sheet at https://ncdisaster.ces.ncsu.edu/disaster-factsheets/preparedness/.

Livestock owners should make sure water troughs are full and additional water is available. She suggested some might get small generators to keep well pumps running.

“And look out for trees on your fences, where your stock could get out,” Watts said.

Another concern is heavy rainfall.

“People are harvesting corn now, and a lot of people plant corn in the bottoms of their land,” Watts said. “If those fields should flood, you have to worry not just about the loss of corn but issues with aflatoxins,” a fungus found on corn.

People should place large tractors, trucks, trailers and other vehicles in open fields to avoid trees or sheds falling on them.

When the storm is over, Cooperative Extension will be in charge of livestock problems, such as the need for hay or to move cattle from a flooded pasture. The number to call is 704-216-8970.

Vineyards across the state are in the middle of harvesting grapes this time of year. Amie Baudoin of Morgan Ridge Vineyards in Gold Hill is concerned about heavy rain. The vineyard has picked tons of grapes already, with larger harvests than in 2016, but three varieties remain on the vine to sweeten up — syrah, cabernet and chambourcin.

“If they’re calling for downpours, we’ll pick the rest Sunday or Monday,” Baudoin said. “… Last year, we lost the cabernet because of a hurricane. That’s the whole scary part of farming. We had a really positive season until right now.

“We’ve had beautiful, perfect fruit,” Baudoin said, with harvests of 5 tons of seyval blanc; 3 1/2 tons of chardonnay; 4 tons of merlot; and 5 tons of sangiovese.

Gov. Roy Cooper has issued an executive order to suspend weighing vehicles used to transport livestock, poultry feed and crops in the state.

In addition, the Agriculture Department is temporarily suspending health certificate requirements on livestock traveling through the state from areas in Hurricane Irma’s path.