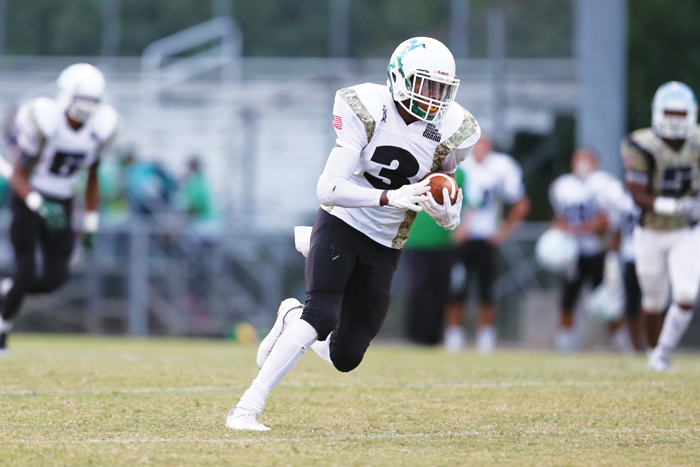 James Sipes/for the Salisbury Post ... North Rowan's Quintous Smith, shown against West Rowan earlier this season, scored the winning TD against Lexington on Monday night. The Cavs come from behind to win, 44-37.

LEXINGTON — Lexington’s lead over North Rowan had swelled to 37-13 in Monday’s non-conference makeup game, and the scoreboard clock at Philpott Stadium was laboring toward the 10-minute mark.

Hopeless? Almost, but the Cavaliers didn’t pack it in.

“We were down 24, but at some point, kids have to make their minds up to hang their heads — or make up their minds to respond,” North coach Ben Hampton said. “I think we waited until the very last possible minute, but then we decided to respond.”

North (2-1) responded to the tune of 31 unanswered points in the final 10 minutes, 9 seconds to win, 44-37. One of the more amazing comebacks in school history at a school that’s made a few.

The winning points came on a handoff to receiver Quintous Smith. He roared 7 yards for the decisive TD, with 1:57 remaining.

“We’d been running that same play, jet action, all night, but we’d been faking the ball to Quintous and then giving it to a back,” Hampton explained. “We put all our eggs in one basket, figured they’d be expecting a fake to Quintous again, but this time we gave the ball to him.  It worked. He scored. The only bad thing was we scored too quick. We gave them time to get back down the field, so we had to stop them again.”

Jacob Young kicked off into the end zone following Smith’s TD, but Lexington still threatened to get a tying TD late. Terren Smith made the game-clinching interception  at the North goal line.

“He stayed over the top, right where he was supposed to be, and he made a heck of a play on the ball,” Hampton said.

Lexington led 10-0 early, breaking a screen for a TD and tacking on a field goal.

North QB Willis Mitchell scored on a 5-yard run, the first of his three rushing TDs, to cut the deficit to 10-6 with 5:37 left in the opening quarter, but a Lexington pick-six by Myles Crosby in the final minute of the second quarter gave the Yellow Jackets (1-1) a 17-6 halftime edge.

“Our offense just didn’t do a very good job in the first half,” Hampton said. “We didn’t give our defense any rest, put them in bad positions, and Lexington has a lot of talented athletes. For three quarters, their quarterback (Saafir Craven) was about as good as you can be.”

It got worse before it got better for North.

With the Cavaliers down 24-6, Jaleel Webster, who topped 300 rushing yards against Lexington last season, broke a 56-yard scoring run to make it 24-13.

“We knew it was going to be hard to come back in a short time because we’re mostly a ground team,” Hampton said.

When you’re down 24, you start thinking about getting 8s — to tie with three scores — and North got the first of those hard-to-get 8s with 10:09 left in the game. Mitchell got the rushing TD. Then he threw for the 2-point conversion: 37-21.

“If we get one stop there, I think it’s game over,” Lexington coach ChuckHenderson said. “But, 24 (Webster) is special. That’s all I can say, that’s all we talked about all week.”

Now North’s defense was getting quick stops, and with 5:04 remaining, the offense produced eight more points. Mitchell scored again on the ground, then Webster got the tying two: 37-37.

North’s defense forced another three-and-out and handed the offense a short field. Then Smith’s scoring run produced the winning points.

“We made a lot of mistakes and there’s a lot of stuff we have to fix,” Hampton. “But as far as the way our kids responded in the fourth quarter, I couldn’t be prouder.We beat a pretty darn good team.”

Webster and Malcolm Wilson combined for 291 rushing yards for North. Craven accounted for 370 yards rushing and passing for the Yellow Jackets.

North leads the all-time series with Lexington 25-15 and has won the last five meetings.