For the love of a candy bar: The Twin Bing invasion 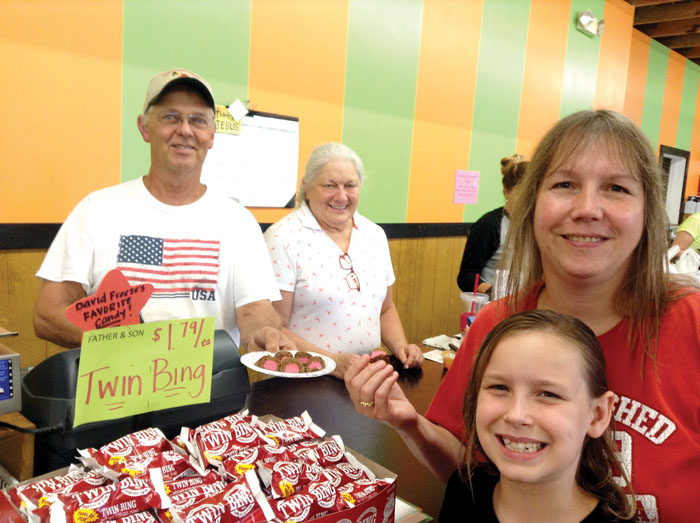 The miles are long on the seat of a bicycle and there’s plenty of time to think about things, lots of things. One of my favorite choices for thinking time has been food. Being always hungry and ready to eat, I was intrigued to get a message from China Grove’s Amy Epley. I had known Amy for quite a few years but didn’t know that she was from Nebraska. And I didn’t know something else — anything at all about Amy’s favorite candy bar.

Amy said, “Sweet memories for me of going to the local co-op with my Dad when I was a child and he would buy me a Bing candy. It was sold in a single pack. I was always happy when my Dad needed to buy oats, feed, or corn from the co-op because that meant I could go with him to get my favorite treat! I grew up in northeast Nebraska (Knox County). We lived 8 miles from Wausa, where the co-op was. I also remember going to the old country store called Midland to get groceries and Twin Bings!  The store was 15 miles away from four different small towns so it got the name Midland. It was four or five miles from our farm.”

The Twin Bing is a candy bar made by Palmer Candy Bar of Sioux City, Iowa. It consists of two round cherry flavored separate but attached centers that are coated with ground peanuts and chocolate. Some call each center a nougat. The Twin Bing has been around since the 1960s.

But long before that, Bings were being made. Cherry, pineapple, vanilla and maple flavors were available in the original single Bings, first made in 1923. Those other hand-mixed flavors are still available today.

“My dad loved the Bing candy bar as a kid. He bought the single for 5 cents and remembers eating it and drinking Dr. Pepper from a bottle with his friends, Doyle and Lyle McDonald. Dad grew up on a farm near Center, Nebraska. He said that all the local parades within 50 miles of Sioux City would fling a Bing-throwing out Bings to the people along the parade route,” added Amy.

When Amy contacted me about the Bings, I was in South Dakota and headed for Nebraska. I was determined to find them and see what made them so good. I entered Niobrara, Neb., my only real town in that state, and didn’t think to ask about them when I stopped at the local grocery store. I reentered South Dakota the next day and stopped in Springfield at a Casey’s General Store, a popular convenience store chain. The clerk’s name was Margaret and I asked her about them. You would have thought she swallowed two 5-Hour Energy bottles back-to-back. She came out from behind the counter, went straight to the candy bar section and proceeded to tell me all about the candy bar. Margaret said, “I absolutely love these things! I have even experimented with making my own. How many do you want?” She talked non-stop until I left the store with two Twin Bings and a warning, “They don’t do well in heat, better eat them quick.” That started my own love affair with Bings. All this from a guy who never eats a candy bar otherwise.

A couple of days later, two University of South Dakota students working at a convenience store in Vermillion got excited when I asked about the Bings. Tessa and Brittany had three different Bings and described each. The Patriotic Bing, with red, white and blue centers and only made near July 4th, the Big Bing with three centers and the fabulous Twin Bings. I bought several of each and make their picture for the paper that night. I continued to eat the Bings as sort of an energy bar where I could find them. Other states where I found them were parts of North Dakota, Minnesota, Wisconsin and of course, Iowa.

Once back home, Salisbury Post Editor Elizabeth Cook surprised me with a bag of Twin Bings and also served them at the library to the attendees at the Post reception that followed my bike ride. I thought those Bings would be my last for a long time, until Linda and Tim Hoffner, owners of Father and Son Produce, decided to carry the Twin Bings. They have been big supporters of my bike rides and Tim got a taste at the library. This past Thursday, I had the honor of speaking to the Rotary Club in Albemarle. The club celebrated with Twin Bings and presented me with a Twin Bings cycling jersey.

Father and Son Produce at 1774 Sherrill’s Ford Road started selling Twin Bings on Saturday, and you can bet that Amy and I both had ours, several in fact. Amy’s daughter, Rachel had her first Twin Bing ever. Amy said, “She’ll remember it just like she did when she had her first ice cream!”