Friday Night Hero: A Hornet that can shake and bake 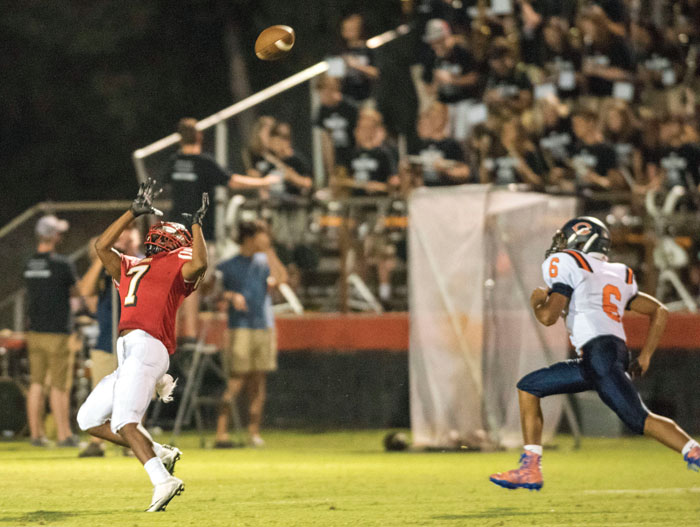 JON C. LAKEY / SALISBURY POST Salisbury's Trell Baker (7) twists around for a pass reception. Salisbury High school took early control of the game with Carson High school. By the end of the contest the Hornets would gain 41 points to the Cougars' 12 points. The game will give Salisbury's Brian Hinson his first win as new head coach. Friday, August 25, 2017, in Salisbury, N.C.

SALISBURY —  Salisbury’s Isacc Latrell Baker answers to “Trell,” and he’s established himself as one of the county’s best athletes in basketball, football and track.

The senior is 5-foot-9, 155 pounds, not ideal size, but he compensates with bursts of speed, quickness and desire. Plus more moves than you’ll see in the average game of chess.

“He wants the ball all the time,” Salisbury head coach Brian Hinson said. “That’s a good thing.”
Baker wanted the ball on defense as well as offense in Friday’s 41-12 win against Carson. His fumble recovery in the game’s opening minutes got the Hornets started — and they never stopped.

“I do like playing both ways,” Baker said. “More chances to make plays. You get tired, but you get used to it.”

Two weeks into the season, Baker is the county’s leading receiver. That’s unheard of territory for a Salisbury Hornet — leading receivers in this county are almost always Falcons, Cavaliers or Mustangs — but his wheels have already turned five catches into 171 yards and two TDs. That’s 34.2 yards per reception.

“That’s why we try, as coaches, to figure out ways to get Trell the ball in space,” Hinson said. “He showed in our first game (against North Rowan) that he can take a simple bubble to the house, and he had another play like that against Carson.”

Baker’s night against the Cougars would’ve been even larger, but he had a breezy 55-yard sprint with a short pass brought back because of a flag. Definitely no one needed to hold on that play, and it’s possible no one did.

“After watching the film, we didn’t seen anyone holding,” Baker said. “That one kind of made me mad.”

In Salisbury’s offense in 2016, Baker’s role was primarily as a running back. He managed 508 tough rushing yards and six ground touchdowns and he also caught three TD passes.

In Hinson’s offense, Baker might get a carry or two per game, but he’s essentially become a receiver.

“In this offense, it’s a different style of option with both our backs basically being dive backs, and that’s not really Trell’s game,”  Hinson explained. “He doesn’t really like being hit, but he’s showed us a lot as a receiver these first two weeks.”

So Baker has found his calling. He’s making his living making people miss. He’s got special acceleration and elusiveness as well as the sort of raw speed that put him in the top five in the Central Carolina Conference Championships last season in the 100 and 200 meters.

Baker is avoiding tacklers, turning in explosive plays and creating excitement at Ludwig Stadium every time he touches the ball.

“I think receiver is the best place for me, especially in this offense,” Baker said. “If I can get the ball outside, I can make a play.”

Baker isn’t just quick. He has excellent eye-hand coordination and was a second team all-county basketball player as a junior. He averaged 13.5 points per game and topped 20 points five times. He’ll enter his senior season in roundball with almost 600 career points.

Baker used his good hands to make a leaping, diving snag for a 35-yard gain that led to key Salisbury TD against Carson right before halftime. He got his touchdown on a 31-yard pass from Griffin Myers early in the fourth quarter. On that one, Baker ran laterally past a host of reaching Cougars.

“I got to dive in the end zone on that one,” Baker said. “Something I’ve always wanted to do.”

Chances are, there a lot more journeys to the end zone in Baker’s future.