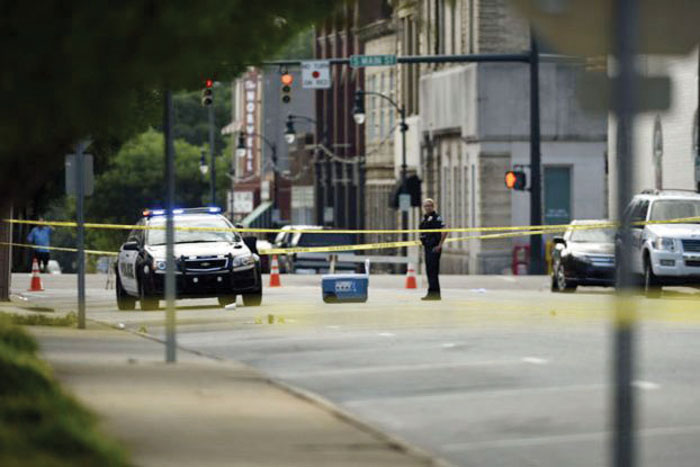 SALISBURY — The weekend murder of 24-year-old Kornell Marquis Cook outside a local apartment complex brought the city’s murder total to eight this year, a figure that wasn’t reached in 2016 until the end of the year.

Investigators say clearances of this year’s murder cases are up due in part to collaboration with other authorities and cooperation within the community.

Beam, who is commander of the Police Department’s Criminal Investigations Division, said the public seems more willing to talk with police investigators and use the CrimeStoppers anonymous tip line, which has generated leads in several murder cases.

“The community is finally seeing we are doing the best we can, and it’s going to take them helping us. And when they do help us, (you see) the results we can have,” Beam said.

In December, the Salisbury Police Department and the Rowan County Sheriff’s Office entered into a partnership in an effort to curb crime and afford the Police Department some much needed manpower. In addition to collaborating with the Sheriff’s Office on murder investigations, the police have also been aided by the State Bureau of Investigation at crime scenes as well.

Beam said detectives have been working almost around the clock, especially in the past month. He said in the most recent murder, detectives worked for 23 hours.

He said there are two detectives and a sergeant who primarily focus on violent crimes. One detective has been working in that capacity for two years and the other for one year. The men are led by Sgt. Travis Shulenburger, whose idea it was to have the detectives narrow their focus. In the past, detectives investigated a wide range of cases.

The following are the nine murders that have occurred in the city of Salisbury and Rowan County this year along with the primary agency in the investigation:

• Feb. 17 (Salisbury police): Demareo O’Bryan Best, 28, was shot after a domestic disturbance at an Oakwood Avenue home. Tasman Stockdale was charged with murder.

• April 28 (Rowan County Sheriff’s Office): Sheila Godfrey, 53, was found dead at her Lyerly Pond Road home by relatives after failed attempts to reach her. She was beaten and choked with an electrical cord. Donald Lee Frye was charged with her murder.

• May 27 (Salisbury police): Timothy Lee Grady, 34, went to an Ellis Street apartment after his sister had gotten into a fight with her boyfriend, Frankie Eugene Cox Jr.. Investigators said Cox shot Grady to death. He was located at an East Lafayette Street apartment.

• June 11 (East Spencer Police Department): Antonio Lee, 26, was shot in the head outside Grant Street Apartments in East Spencer after an argument. Howard Mickel III was charged with murder.

• July 29 (Salisbury police): Da’Quan Robertson, 23, and Anthony Gill, 22, were both shot to death in downtown Salisbury not far from Go Burrito restaurant on West Fisher Street. Two other men were shot and wounded. Police charged Zakelo Duren with inciting to riot and Jalen Lamont Cook with murder.

• Aug. 12 (Salisbury police): Jeffrey Allen Ramsey Jr., 24, was shot in the chest outside Three Stars Mini Mart. Asheville police say the morning before suspect Malik Eric Johnson’s arrest, Johnson stabbed a woman there multiple times. He stole her vehicle, which was found, along with Johnson, outside a Spencer home.

• Aug. 27 (Salisbury police): Kornell Cook, 24, was shot and found dead outside Brenner Crossing apartment complex, where a relative of his lived. Police have charged 18-year-old Elija-wn Oglesby and are looking for Xavier Lowe, 17.

In 2016, there were 15 homicides in the city and county. One was deemed a justifiable homicide. In another case, a grand jury did not find probable cause that a crime had been committed.

Rowan County Sheriff’s Detective Lt. Chad Moose said there is not a big difference in the murders committed in the county versus the city. He said many murders, regardless of where they occur, are by someone who knew the victim.

Moose said although there was only one murder committed this year thus far in the county, there were a half dozen in 2016.

Moose, who is in charge of the Sheriff’s Office’s Criminal Investigations Division, said he tackles a murder case by deploying an “all hands on deck” strategy. He calls in detectives to a crime scene and then doles out assignments while at the scene. The specific murder case is then assigned to a lead detective.

He agreed that in many homicide cases, collaboration is key. Moose said the Sheriff’s Office relies on the SBI often to assist with investigations.

Trio from UNC Board of Governors tours research campus…