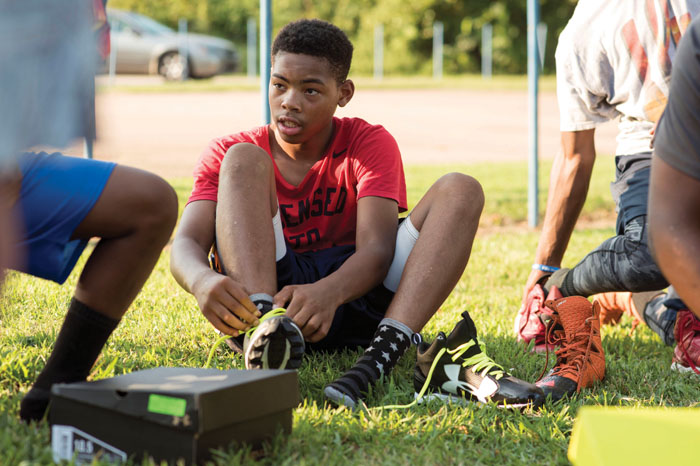 Isaiah Boulder puts on his new pair of cleats. Horatio Everhart has gathered sponsors for youth athletes through the program Caring for One Child at a Time. Everhart and some of his sponsors came to Hall's Gym on Monday evening to meet with some of the football players that play for the Salisbury 49ers football team. Jon C. Lakey/Salisbury Post

SALISBURY — When Horatio Everhart played football for the West Rowan Warriors as a youth, he was the child of a single parent.

Money was tight, and just getting to practice was hard. Coach Mike McCullough took time to make sure his kids got to those practices, made sure their entry fees got paid and even bought the kids food to make sure they’d have something to eat.

Everhart took notice of all this and credits McCullough as the inspiration for his program Caring for One Child at a Time.”

On Monday afternoon, Everhart showed up at the Salisbury 49ers’ practice with bags of new football shoes and sponsors in tow. He had consulted with coaches and officials of the team, designating those who are from single-parent homes and having trouble paying the required fees.

Everhart was joined by Rebecca French and Lindsay Nicole Clay, both of whom had committed to sponsoring an individual athlete. Coaches sent the chosen players to Everhart, and they immediately received new shoes and socks.

Antonio Chambers, a 12-year-old who attends Knox Middle School, was the first to get his shoes on.

“This feels so good to have new shoes,” Antonio said. “I am a running back and have been learning new stuff with the team.”

Both Johnai Rippy and Isaiah Boulder were surprised to have a sponsor that covered the cost of new shoes and fees for the AAU program.

Johnai and Isaiah admitted having issues in class at Knox but they enjoyed their time on the football field.

Once the players had their shoes and socks on, each of them took a knee and listened as Everhart explained his program.

“It is an honor to come out and sponsor you guys, but it doesn’t stop here,” Everhart said. “I was once in your shoes. You guys are our future. Put God first before anything, and you guys will be our future.

“I will be following you guys in school and reaching out to help you. Your grades matter. Learn to walk that straight path, and we can come together and rebuild. We are not paying and just leaving.”

Marcus Cook, 13, a Knox student, said, “This can make others want to come out. They can experience playing more teams and going to new places. I know what he meant about the grades. I have only had one B.”

“I need to stop goofing around in class and stay out of predicaments,” Johnai Rippy added.

Once the kids ran back to practice, Everhart said, “As soon as I sponsored my first kid, I knew this was for me. I came up with the idea and my girlfriend, Hannah Miller, put together the logo and designed shirts. We posted what we were doing on Facebook and individuals immediately began to join us. A website is in the works.”

“We’ll help kids with expenses for all sports, including soccer, football, basketball, baseball and even cheerleading.”

Brian Miller, president of the Salisbury 49ers, said each kid is responsible for paying $75, which goes to help with insurance, equipment, a uniform and travel. The AAU team has about 70 kids in five age groups ranging from 6 and younger and up to 14.

Only about 25 players have paid their fees, and as many as 85 percent of them are from single-parent homes.

“Many have worn the same shoes for a couple of years, and you know they are way too small,” Miller said. “The Police Department is a major sponsor of our league and that helps, but the family situation of most of these players is not good. What Horatio is doing here matters. With community backing, we can all come together.”

Sponsor Lindsay Nicole Clay was on hand to meet the kids.

“It was an honor to donate the cleats,” Clay said. “Helping these players is a good cause. Just call me a football sponsor mom. These kids being part of this team is a good thing and I will do what I can to help them. I plan to go to their games and will help transport the players.”

Rebecca French is another sponsor.

“I didn’t think twice,” French said. “I have been blessed with the ability to help.”

Everhart is a machine operator for Custom Plastics Forming. He played football at West Rowan High, won a state championship in 2002 and then played at Ferrum College.

Everhart can be reached at 980-434-4068 or on Facebook at Dimp Everhart. The nickname came from his grandmother, who loved his dimples as a child.

More information on the Salisbury 49ers can be found at www.salisbury49ers.teamapp.com.