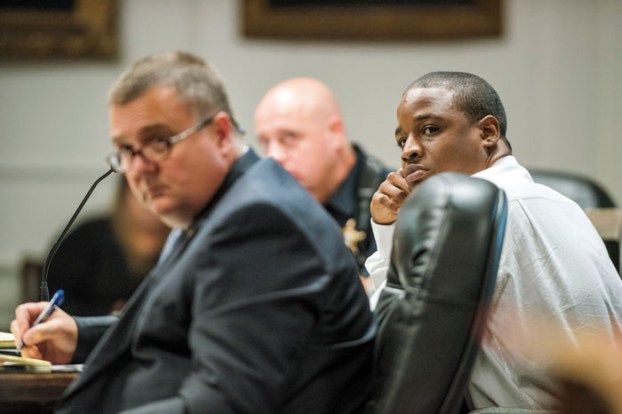 Defense attorney Darrin Jordan, left, and his client, Destin Sloan, glance over at the evidence being presented on an projector screen. The trial for Destin Sloan continues in the Rowan County Superior court on Wednesday. Jon C. Lakey/Salisbury Post

SALISBURY — A Woodleaf man was found guilty of voluntary manslaughter Friday after a weeklong trial in the death of his neighbor.

Destin Sloan, 25, maintained that he fired at Gray in self-defense as they both struggled for Sloan’s weapon. Prosecutors said Gray, who was unarmed, wanted Sloan to “fight him like a man” with his fists.

The verdict came at the end of a day of deliberations.

Judge Mark Klass sentenced Sloan to 62 months to 87 months in prison, or about five to seven years. Sloan gave notice that he will appeal the verdict.

A Raleigh medical examiner testified that Gray was shot in the neck, chest and groin. A bullet struck Gray’s carotid artery and his chest, then exited out of his lower back and his groin area.

The two men had argued for three to four weeks before the shooting, but they had at one time been cordial to each other, according to testimony during the trial.

Sloan told Rowan County investigators that even after they argued the first time, he gave Gray a ride home one day.

Friends and relatives of Gray told the court that they saw the victim with baseball bats but that he dropped them in an effort to fistfight Sloan.

Many of the witnesses who testified said they only saw portions of the argument and subsequent shooting because their view was blocked by a dumpster in the middle of the property and Sloan’s truck.

Michael Wyrick, a friend who had come to visit Sloan that day, said he saw part of the shooting and called 911. Gray’s nephew Sha’Heem Gray testified that he heard the argument and gunshots. Sha’Heem Gray’s then-girlfriend, Caitlyn Vessells, also said she heard the shooting.

Testimony revealed that after shooting Gray, Sloan left his home with his baby and returned to the scene a short time later. Sloan had taken the child around the corner to stay with the child’s mother.

Sloan said he fired a warning shot into the ground. Sloan told detectives that he fired a second shot at Gray but he didn’t believe he struck his neighbor.

He said Gray grabbed for the gun and tried to take it from him. Sloan told investigators that as he began falling to the ground, he fired two more shots at Gray.

His attorney, Darrin Jordan, said his client was not the aggressor but used necessary force to stop Gray.

Jurors could have chosen a conviction for second-degree murder, but instead convicted Sloan on the lesser charge of voluntary manslaughter.

SALISBURY — Kerry Gray was “aggressive” and didn’t appear to be scared of a gun pointed at him on July 13,... read more