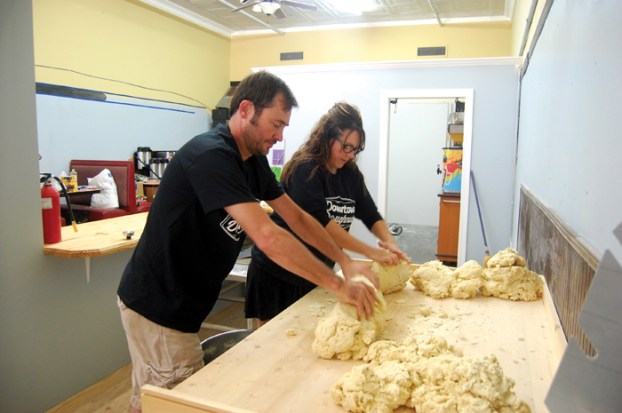 Chris and Amber Fowler practice their dough rolling skills in advance of their Friday grand opening. Amber and Chris said they've been dreaming of opening a doughnut shop for years. (Jessica Coates/Salisbury Post)

SALISBURY — Amber and Chris Fowler are ready for a new adventure.

The couple have been running The Dilly Dally painting studio for nearly two years. Now they are following their dreams of having a doughnut shop.

“After we opened The Dilly Dally, you know, we just kind of kept on the search for a building,” said Amber. “And then, when Firehouse Sweets moved out, I had inquired about this and then said, ‘This is it; we’re going to do doughnuts.’”

Their new shop, Downtown Doughnuts, is in the storefront that used to house Firehouse Sweets, at 209 S. Main St.

Amber said a primary focus of the business will be to stand apart from other doughnut businesses, like Krispy Kreme and Country Donutz.

She said that as a part of their late-hours business model, they will offer free coffee after 10 p.m. on Friday and Saturday to firefighters, police officers, members of the military and “anyone who can help our safety.”

They will also sell hot tea, iced coffee and tea, as well as homemade bagels all day.

Amber said the doughnut selections will be the yeast variety.

“Cake doughnuts, you have one recipe and, boom, they’re done,” Amber said. “Throw it all in the pot and mix it up and they’re done. Yeast doughnuts, it’s an art. It is. Every day is different. It depends on the temperature, and you have to add and subtract yeast every day for the humidity.”

She said the recipe will be based on that of Britt’s Donuts in Carolina Beach.

Amber said there will be other distinct aspects of the store, including a 10-foot piece of glass through which customers can watch doughnuts being made.

“You put the screens down to flip the doughnuts, and everybody will be able to see that. That’s the most awesome part about this,” Amber said.

Amber said the shop will host children’s birthday parties. She knows how much little kids love doughnuts, especially since one of her own sons, Alexander, is such a big fan of them.

With two young sons and another business to run, Amber said, it’s going to be tough to juggle the new responsibilities of the doughnut shop.

“It’s definitely a trial-and-error kind of thing each day. Like, we just don’t plan. You know? Like you just can’t plan,” Amber said.

But she said that both she and Chris are “really excited” to finally see their doughnut dreams come true.

Downtown Doughnuts will have its grand opening on Aug. 18, beginning at 4 p.m. The shop will have doughnut giveaways, hot dogs for sale and corn hole boards.