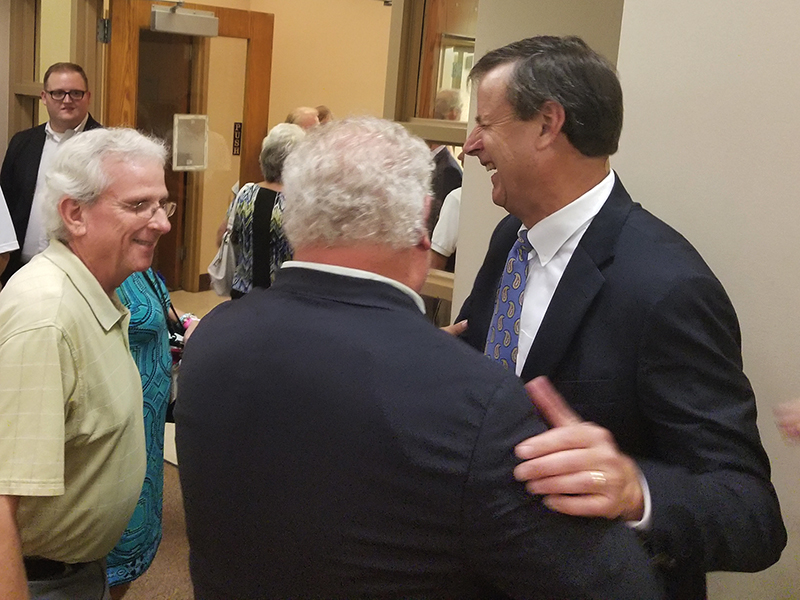 Josh Bergeron / Salisbury Post - Davie County Commissioner and attorney Dan Barrett, right, smiles and laughs after being selected as the next state senator for the 34th District. Barrett will replace former Sen. Andrew Brock, who resigned to take a spot on the state's Board of Review.

Barrett beat out two others — Salisbury attorney Bill Graham and Chad Mitchell, a teacher and former Rowan County commissioner — for the 34th District seat, which was vacated in June when former Sen. Andrew Brock resigned to take a seat on the state Board of Review.

Barrett won on the first ballot, receiving more than 50 percent of the total vote.

Immediately after the vote, Barrett gave a short speech expressing his appreciation to the people who voted for him.

“This is such an honor,” Barrett said. “What I said in my speech earlier holds true. If you need me, call me. I’m here to serve you. I will do my very best for you.”

He also thanked Mitchell and Graham for running a clean campaign.

Barrett’s selection was made by members of the Rowan, Davie and Iredell County Republican Party executive committee who live in the 34th District. More than 60 people eligible to cast a vote for the vacant Senate seat gathered at the Davie County Courthouse in Mocksville. A number of spectators also attended.

First, people with a vote were able to nominate candidates. Barrett was nominated by Mark Jones, also a Davie County commissioner.

In his speech, Barrett stressed his involvement at the grassroots level. He has served four terms as chairman of the 5th Congressional District Republican Party and as a precinct chairman. Barrett said he’s also worked for the N.C. Republican Party.

“You know, we have a lot of good folks who run for office, but it’s people like you, folks like you, who work year in and year out for Republican and conservative causes,” Barrett said. “That’s what makes the party run, and those are the folks who are truly indispensable for our conservative future.”

He reminded those gathered Tuesday that he walked across the state in 2004 during a bid for governor.

“Mark Jones, my fellow commissioners and people throughout Davie have worked together to create an economic development engine that folks throughout this region are just amazed at,” Barrett said. “We’ve brought new businesses in. We brought a new hospital in. We’ve done a lot of wonderful things, and I want to bring that energy and sense of teamwork to work for all our counties in the 34th.”

Barrett said he expects to receive a lot of calls from constituents and pledged to work hard if selected to fill the vacant seat.

After Barrett’s selection, Senate Leader Phil Berger posted on Twitter that he looks forward to working with Barrett on conservative reforms.

“We look forward to working with him to continue the Republican efforts to lower taxes, reduce regulations, and help all North Carolinians prosper,” Hayes said.

Once his selection becomes official, Barrett will serve the remainder of Brock’s term, which expires at the end of 2018. After that, Barrett’s future is unclear because of court-ordered redistricting. In a previous interview, Barrett said he’ll need to see how districts look before deciding whether to run for a full term.