It’s been a rough spring and summer for lawns 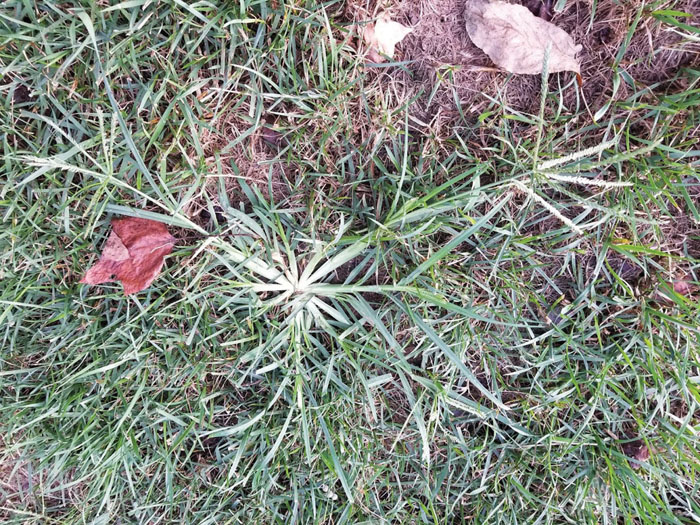 Submitted photo Goosegrass has a wagon wheel appearance at the base and often comes after crabgrass.

Too much shade. In the fall and spring there were no leaves on large trees surrounding the fescue yard. Fescue needs full sun to grow and develop strong roots. As large trees reach maturity, so does the amount of shade produced. In order to have maximum growth, fescue grass must have full sun. Elimination of shade with judicious pruning or removal allows needed light to the areas planted in fescue.

Improper seeding. Measure your areas and calculate proper seeding rates before planting in the fall. Planting too much seed can be as bad or often worse than planting too little seed. Adding extra to make sure can often lead to disasters later in the spring and summer.

Fungal diseases. Cool season fescue looks great in May but when temperatures climb into the mid-80s, coupled with high humidity, fungal diseases such as brown patch and dollar spot occur. Once established, brown patch will return for years on a regular basis, causing brown circular spots in the lawn. Fungicide applications in the summer months as a preventative will control the spread of the disease. The fungus damages and weakens established fescue. However, it will kill newly seeded or weakened fescue lawns.

Bad mowing practices. Cool season fescue needs to be mowed often to 3-1/2 to 4 inches. Mowing too close or waiting to mow after the grass has grown tall is a common problem that weakens or destroys a lawn within minutes. Mowing an overgrown fescue lawn close is certain death, especially in hot growing conditions.

Unusual weather. It’s easy to blame weather, but when you have constant rain, then excessive heat, drought and then more, it is a definitive factor. Fescue is a cool season grass that really hates excessively hot weather.

The season for questions never ends