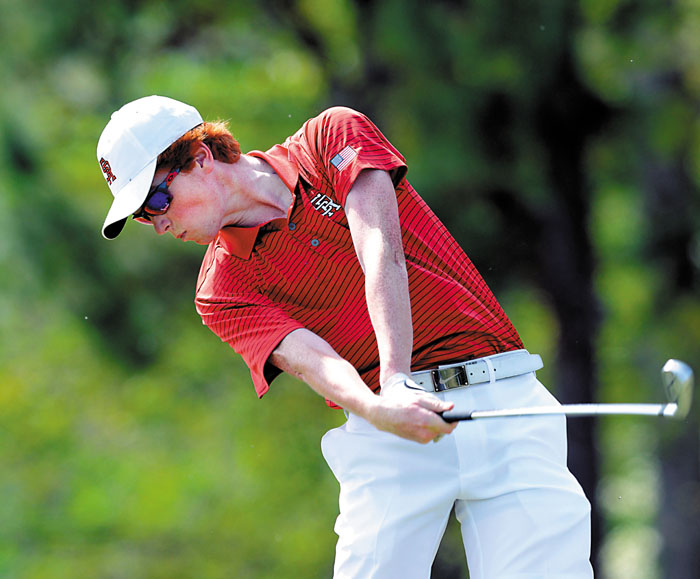 Wayne Hinshaw/for the Salisbury Post ... Parker Chavis, shown playing for South Rowan during the South Piedmont Conference Tournament in May, won the 10th annual Rowan Junior Open, Tuesday at Warrior Golf Club in China Grove. Chavis, who begins his freshman year at Pfeiffer on Friday, shot a 74 during the rain yesterday to overcome the first-round lead of Charlie Barr.

CHINA GROVE — Steady rain at Warrior Golf Club made it a day when pars, not birdies, were the realistic goal.

Parker Chavis made a lot of gritty pars on a soggy Tuesday morning, and his 3-over 74 was good enough to win the overall championship in the 10th annual Rowan Junior Open.  Chavis’ 68-74 — 142 won by a single stroke over phenom Charlie Barr, the 14-15 age group champ, and Apex’s Seve Anfindson, who took runner-up honors in the N.C. Junior Boys Championship in June.

“It rained the whole time, except the last few holes, so today’s round was twice as hard as Monday’s round at Irish Creek,”  said Chavis, a South Rowan High graduate who will move into his new residence at Pfeiffer University on Friday. “The greens were so wet, it was close to impossible to make a putt.”

Chavis started the day in second place, two shots back of Barr, a rising freshman at Cannon School. Barr had fired a sizzling 66 at Irish Creek.

“I birdied No. 4 and got within one shot of Charlie,” Chavis explained. “But after he birdied No. 12, I had fallen four shots back. I felt myself losing some focus then because it had been a tough day and I just couldn’t get the ball in the hole. I didn’t think I had any chance to win the overall championship at that point, but I kept going. I avoided the big mistake, didn’t put up any big numbers, and then I got fortunate. Charlie came back to me.”

Barr sailed a shot over the green and carded a triple bogey on the par 4 14th. The youngster took another triple on the par 5 17th, as Chavis slid past him to the top of the leaderboard.

“This was my last tournament as a junior player, so it’s a perfect way to end that part of my career with a championship at home,” Chavis said. “A lot of great players won this tournament — Nick Lyerly, Logan Shuping, Davis Richards — so walking off the 18th green, that was an amazing feeling. I was thinking about my parents and my swing coach, Jimmy Hubbard. They’ve always supported me.”

Gastonia’s Madison Duffie, a Forestview graduate and a member of the Jaguars’ 3A state championship teams, placed fourth overall at 72-72 — 144.

Mooresville’s Sean Swavely shot 82-77 — 159 and won the 12-13 age group. He finished five shots ahead of runner-up Ben Childress of Salisbury.

Mount Pleasant’s Abbie Daquila was the girls winner. She shot 90-92 — 182 to edge Hickory Ridge’s MaddieHayes by one stroke.