How ‘bout that Cowboy: Jerry Jones inducted into Hall of Fame 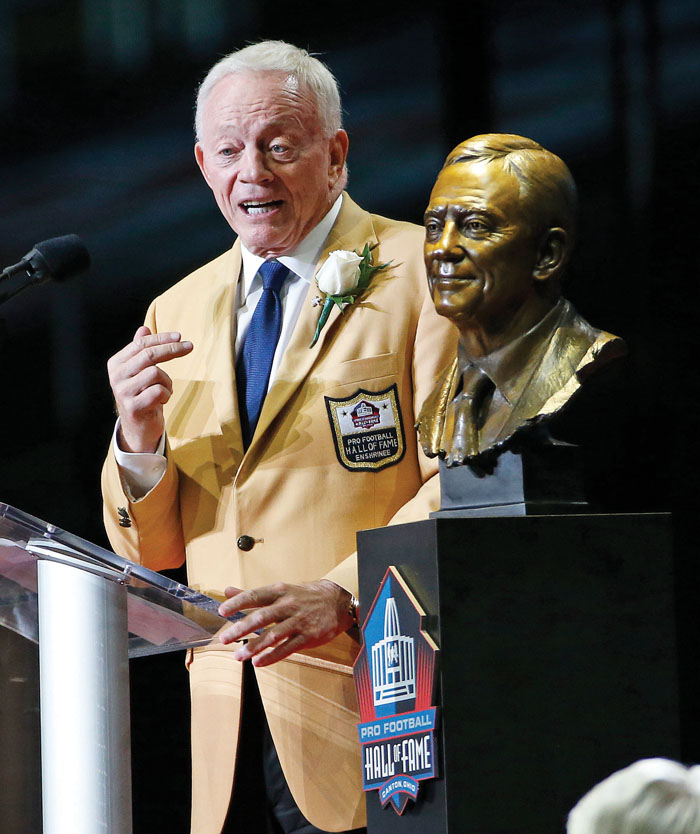 Dallas Cowboys owner Jerry Jones speaks next to his bust during inductions at the Pro Football Hall of Fame on Saturday, Aug. 5, 2017, in Canton, Ohio. (AP Photo/Gene J. Puskar)

CANTON, Ohio (AP) — Jerry Jones joined the likes of George Halas, Art Rooney and Al Davis, owners in the Pro Football Hall of Fame, when he was inducted into the shrine Saturday night.

Jones took the NFL by storm when he bought the Dallas Cowboys and, within three years won the Super Bowl. He added two more in the next three seasons, but his inclusion in the Class of 2017 was built on his overall contributions to the NFL.

A key figure as the league grew to a multi-billion dollar business, Jones has had a hand in many important decisions, from TV contracts to sponsorships to labor issues.

Yet he admitted in his speech that before buying the franchise, he had “become afraid of business heights” after having several failed enterprises. But he also had learned, “Don’t let anyone know you are scared and just keep on keeping on.”

He swallowed hard, bought the team that was losing $1 million a month and, now, his Cowboys are valued at $4.2 billion by Forbes, the most valuable franchise in the world.

In front of nearly the entire current Cowboys team, Jones wore a pair of custom-made shoes gifted to him by Phil Knight, was presented for induction by his wife, Gene, who has never missed a Cowboys game since the Jones family bought the team in 1989.

Moments after one of the best running backs in NFL history entered the Pro Football Hall of Fame, another followed: LaDainian Tomlinson.

The fifth overall selection in the 2001 draft, Tomlinson won rushing titles in 2006-07, taking league MVP honors in ‘06 when he set a record with 31 touchdowns. Also a strong receiver, he added 4,772 yards and 17 TD receptions to his career numbers for 13,684 yards rushing and 145 scores. Tomlinson even threw seven touchdown passes.

Terrell Davis had one of the most spectacular short careers in NFL history. His seven seasons were brilliant enough to get him into the Pro Football Hall of Fame.

The former Broncos running back was inducted Saturday night. He went from an obscure sixth-round draft pick from Georgia to a league MVP and two-time Super Bowl winner. Davis was the catalyst for the NFL titles Denver won in 1997 and ‘98 with another Hall of Famer, John Elway, at quarterback.

The 1996 and ‘98 Offensive Player of the Year, 1997 Super Bowl Most Valuable Player and ‘98 NFL MVP, Davis’ meteoric stint came to an ugly end with a devastating knee injury in 1999. That in great part kept him out of the hall for more than a decade.

Andersen played an incredible 25 pro seasons, a league record, mostly for the Saints. He also was with the Falcons, Giants, Chiefs and Vikings, playing 382 total games.

The left-footed kicker from Denmark — his selection in February set off celebrations back home, where American football hardly is a sports staple — scored 2,544 points (565 field goals, 849 extra points). He is the all-time scoring leader for both New Orleans and Atlanta and was a five-time All-Pro.

Sackmaster Jason Taylor, elected in his first year of eligibility, was inducted Saturday night into the Pro Football Hall of Fame.

A star mostly with Miami, Taylor also spent one season with the Redskins and one with the Jets. In his 15 NFL seasons, the versatile end was a three-time All-Pro and the 2006 Defensive Player of the Year. He had 13 1/2 sacks, two interceptions returned for touchdowns, 11 passes defensed, 10 forced fumbles, two fumble recoveries and 62 tackles that season.

A third-round draft pick from Akron — just down the road from the Hall of Fame — Taylor was presented for induction by Jimmy Johnson, who coached him for several years with the Dolphins.

Kenny Easley, a hard-hitting safety for the Seahawks and a member of the 1980s All-Decade Team, was inducted Saturday night into the Pro Football Hall of Fame.

A seniors committee choice, Easley played only seven seasons and 89 games for Seattle. But what an impact he made as an intimidator and ballhawk.

The 1981 NFL Defensive Rookie of the Year, Easley was the league’s top overall defender in 1984 when he had a league-leading 10 interceptions, a career high.

Easley, who was presented for induction by his high school coach, Tommy Rhodes, retired after the 1987 season. He had to wait 24 years before being voted into the hall.

“I was first nominated for the hall in 1997,” Easley said. “Twenty years later — be anxious for nothing — the Hall of Fame was dropped on the shoulders of Kenny Easley like a pair of shoulder pads. Some folks said I deserved to be in the hall earlier; I don’t believe that. Others say he didn’t play long enough, I don’t believe that.”

Easley concluded a politically and religiously toned speech by saying: “I thank you for welcoming me into your exclusive club.”

The Pro Football Hall of Fame has opened a display honoring NBC’s “Sunday Night Football” for its record six consecutive seasons as the top-rated show in prime time.

The centerpiece of the display describes how the program debuted in September 2006 and soon became a huge TV hit. Five years after the series launch, SNF averaged more than 21 million viewers, becoming the first sports series to rank as the prime-time leader for a full TV season (2011-12). It has remained on top since.

“The Pro Football Hall of Fame celebrates excellence everywhere,” Hall of Fame President David Baker said. “We are excited to recognize NBC ‘Sunday Night Football’ for its tremendous presentation of our great game to more than 20 million Americans each week, and its record run as the No. 1 show in all of prime-time television.”

Among the items on display is the Sports Emmy for outstanding live sports series won by “Sunday Night Football” for the 2015 NFL season.

Also on view are:

—The spotting board for the 2015 Super Bowl won by New England over Seattle, which is the most-watched program in U.S. TV history (114.4 million viewers).

—Carrie Underwood’s dress, shoes, and jewelry from the 2017 show opening.

—A highlight reel chronicling memorable moments in the history of the series.