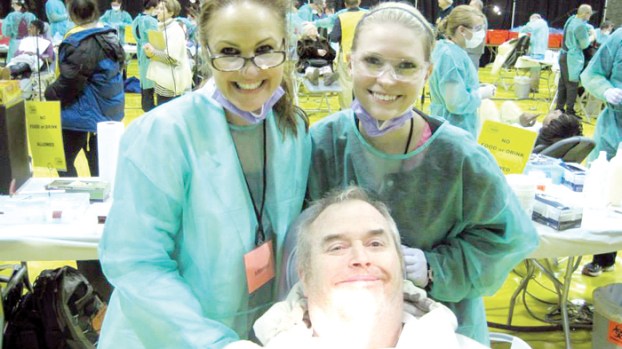 Submitted photo Dr. LuAnne Anderson, left, poses with a happy patient at a past N.C. Missions of Mercy dental clinic in Salisbury.

Another free dental clinic approaches; for patients, volunteers, the experience is powerful

What: The N.C. Missions of Mercy portable free dental clinic is for adults in financial need with no other options.

SALISBURY — In 2015 during the first N.C. Missions of Mercy dental clinic held in Salisbury, among the hundreds of volunteers was a group of enthusiastic Salisbury Rotarians — 45, to be exact — who made the clinic one of their community projects.

Salisbury Rotary’s president at the time, Jay Dees, learned he was assigned to the trash detail. It wasn’t as unglamorous as it might sound.

“Doing trash was a great job,” Dees says, looking back, “because I got to walk around and see everyone.”

Many of the financially strapped patients had walked into the free clinic in pain, and having a tooth extracted or a cavity filled meant immediate relief.

Having a partial plate made to fill embarrassing gaps in their mouth gave them renewed confidence. Serious cleanings allowed them to smile again.

A local attorney, Dees sensed major weights lifting off the people in the dental chairs. He saw how tired, yet satisfied all the dentists were. He noticed patients crying with happiness and hugging the dentists who had helped them.

“For us, it was just really powerful, being volunteers,” Dees recalls of the MOM Clinic. “… You can touch it, and you can feel it.” Rotarians also paid for the clinic’s pharmacy that year.

Salisbury’s third N.C. Missions of Mercy dental clinic — free for adults in financial need — will be held Sept. 15 and 16 at the West End Plaza (the former Salisbury Mall).

The first two clinics were conducted in Goodman Gymnasium at Catawba College. This one will take place in what used to be the JC Penney store at the mall.

“It’s a M.A.S.H. unit for dentists,” says Krista Woolly, who is serving as community coordinator for the Salisbury MOM clinic and is otherwise executive director of the Community Care Clinic here.

At least three times a week, local dentists volunteer their time at the Community Care Clinic on Mocksville Avenue, and over a year, that clinic sees about 1,600 dental patients.

But the free, portable MOM clinics, such as the one here Sept. 15-16, will treat roughly 800 people. “In two days, we’ll see half of what we see normally (for a year),” Woolly notes.

So a MOM clinic’s reach is enormous. Dental, medical and non-medical volunteers gather like the mobile military units Woolly describes and try to help people in financial need who feel as though they have no other options.

For some dentists and their assistants, the sense of accomplishment and fulfillment from an MOM clinic makes them went to volunteer elsewhere in the state.

Hill has volunteered at nine MOM clinics in places such as Greensboro, Winston-Salem, New London, Troy, Fuquay-Varina and Salisbury. The clinics, an affiliated program of the N.C. Dental Society, make do with whatever facilities are available.

In New London, patients went through processing at a church, then were shuttled to dentists set up at the fire department. In Fuquay-Varina, the clinic was established in an abandoned hardware store, Hill noted.

Dees and Hill joke that for many of the professionals, going from clinic to clinic becomes like loyal fans traveling to Grateful Dead concerts.

The patients themselves are like fans, too. They often find whatever transportation they can to the free clinics, because they often need follow-up work, plus the free clinics are their only viable option for care.

Woolly says it’s known that about 21 percent of Americans don’t have medical insurance, “but how many don’t have dental insurance?” she asks. The percentage has to be much more significant.

Dees says he is struck by the instant impact the clinic can have on people’s lives.

“I didn’t expect that part of it,” Dees says.

Patients the dentists see might be self-medicating for pain every day. Their dental problems could lead to their losing jobs or not looking for jobs. Simply not being able to smile affects confidence in job interviews or might lead to people being unemployed or underemployed.

Dees and Woolly tell a story of a woman who worked in the kitchen of a barbecue restaurant because of the condition of her teeth. She wanted to be a waitress or a hostess, and those jobs opened up to her after she attended the MOM clinic.

“We take it for granted,” Dees says of people who have access to regular dental care and can afford it.

The Salisbury MOM clinic, inspired and initially organized by Dr. Jim Dunkin and Dr. David Mayberry, has had many heroes. One of the biggest is pharmacist Mike Fuller of Innes Street Drug and the level of prescription care the Salisbury clinics have been able to offer.

Some MOM clinics have no pharmacy at all. Others might give only 24 to 48 hours worth of medications, not the full course of antibiotics the patient really needs.

Volunteers must sign up prior to the event by visiting www.ncmom-salisbury.org, or by going by the Community Care Clinic at 315-G Mocksville Ave. and filling out an application.

The event is not able to use people who do not register in advance.

Woolly says the MOM clinics bring many people together for a unique community service.

As for Dees and the upcoming Sept. 15-16 clinic, he thinks he might be promoted — from trash to recycling.

Starr Forney, the brightest star you ever met