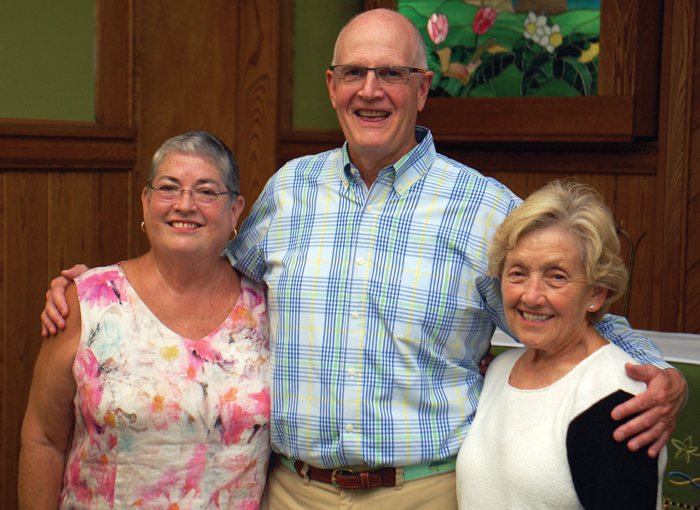 Bill Johnson, administrator of Trinity Oaks Health and Rehab, stands with Kaye Brown Hirst, left, and Kaye Leonard. The women wrote recommendation letters that were key in Trinity Oaks being recognized as the 'Not for Profit Program of the Year' by the American Health Care Association. Mark Wineka/Salisbury Post

SALISBURY — Kaye Brown Hirst recalled going to breakfast one morning at Trinity Oaks Health and Rehab, where her mom had lived for almost a year before her death.

“Now remember that she had dementia,” Hirst said. “She informed me she thought she’d go to the mountains that day and visit several places she and Dad always enjoyed.

“I played along, told her to take a sweater and have fun.”

Hirst said she visited Trinity Oaks the next day and asked her mother how the mountains had been, suspecting, of course, there never had been a mountain trip. Her mother talked about eating at one of her favorite restaurants and sitting in a rocker in front of Mast General Store.

“And I said, ‘That’s great!'” Hirst said. “A little later, another resident’s daughter mentioned how much fun she’d had getting to know my mom on the trip to the mountains the day before.

“Wow, I turned red. How the staff could manage taking a busload of patients to the mountains for a day to remember, I’ll never know.”

The staff at Trinity Oaks Health and Rehab, led by administrator Bill Johnson, tends to shed convention and look for ways to go above and beyond for their residents.

For close to 10 years, Johnson and his team have led twice-a-year trips to the beach for willing residents and day trips to the mountains. They have helped residents attend concerts, movies and theater and held things as simple and fun as watermelon-eating parties.

Last week, the American Health Care Association announced its 2017 national award winners in six categories, and because of its life enrichment program, Trinity Oaks was named the “Not for Profit Program of the Year.”

Ted Goins, head of Lutheran Services Carolinas, visited the Trinity Oaks campus Monday afternoon as staff members celebrated the national award, which according to the AHCA “highlights a specific program that adds value to the care of individuals within a community.”

“It’s about every person in this room, on this whole campus,” Goins said.

Goins, once a nursing home administrator himself, praised Johnson in particular. “I thought I ran a pretty good nursing home until I met Bill Johnson,” Goins said.

Johnson will accept the award at a national meeting this fall in Las Vegas, Nevada.

Goins joked that Johnson will take endowment funds with him “and double our money.”

Key components in the nomination submitted to the AHCA were the letters of recommendation provided by Hirst and Kaye Leonard, who has served on the Lutheran Services Carolinas board of trustees for nine years, including five as chairwoman.

Leonard’s sister, Cindy Rentz, lives at Trinity Oaks Health and Rehab, and Leonard had six other family members served by the nursing care facility in the past.

Leonard noted the Trinity Oaks staff offers many outings and trips, some that include 15 residents or more, including residents from the memory unit.

“Among those,” Leonard said, “the beach trips are the most special.”

“One can only begin to imagine the coordination of safety, medical needs and fun this includes,” Leonard said as part of her letter.

Johnson, his staff and volunteers do a lot of lifting, pushing, pulling, feeding, dressing, bathing “and most importantly, laughing with everyone,” Leonard said.

“Getting 15 residents in wheelchairs on the beach is no small task,” Leonard added, “and the gratitude of even one stroke patient with a fishing pole in his hand is, as the resident said, ‘I could die right now and be perfectly happy sitting right here.'”

Leonard said Johnson and his staff work to bring a sense of normalcy and meaning to the lives of many people.

“Bill has become like a family member to my sister, who has both physical and mental challenges since birth,” Leonard said. “He is one of her ‘stars,’ and she states, ‘He is fantastic and very special to me.'”

Both of Hirst’s parents stayed at Trinity Oaks Health and Rehab. Her father was a resident following a bad stroke and lived only six weeks after that stroke.

“She’d say, ‘This place is great, but I’m ready to come home … but I want to go on the movie outing tomorrow.'”

Hirst said once her mother settled in she would tell Kaye about having made doughnuts on Fat Tuesday, a long tradition in the Brown family.

Hirst said she would take her mother fresh tomatoes, white bread and Duke’s mayonnaise, but “I was informed that was unnecessary because they already had tomato sandwich parties at Trinity Oaks.”

Her mother came to enjoy the watermelon parties and activities she had been missing such as snapping green beans, shucking corn, sewing and quilting.

“She was afforded the opportunity to live life again beyond the walls of Trinity Oaks,” Hirst said. “She attended the theater and concerts, and even heard the entire Salisbury Symphony at Trinity Oaks.

“… All these cultural activities she and Dad had enjoyed for so many years — and that I couldn’t manage on my own and that she thought she’d never do again — were available. And, oh, how it made her happy.”

Johnson thanked the roomful of staff who had assembled in the activities room/chapel Monday afternoon.