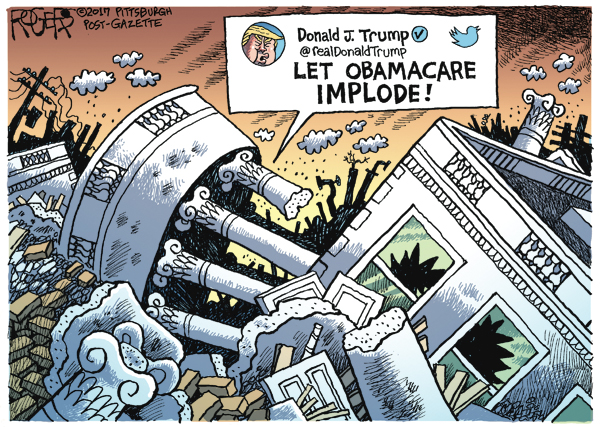 Chaos has only just begun

From a column by Timothy L. O’Brien, executive editor of Bloomberg Gadfly and Bloomberg View:

So out went Anthony Scaramucci. This is sad. Judging from his tweets from Air Force One, Mooch clearly liked his new job.

While Scaramucci’s tenure only lasted an eye-blink, he certainly won’t be the last member of Team Trump who loses access to Air Force One. Trump’s presidency, like his business career, has been marked by unpredictability, lax management, wasted time and energy, backroom skullduggery, and a cult of personality so radioactive that it burns most of whatever’s exposed to it.

The Trump soap opera isn’t episodic, either. Chaos and uncertainty are what Trump thrives on and what he relishes. … This past week, like the weeks before it and the weeks to come, is what it will always be like.

… (T)he permanent chaos makes it so easy to forget that the presidency isn’t supposed to be a parade of carnival sideshows. A similar mental hurdle exists around the myriad financial and business conflicts that engulf the White House. Those conflicts are so wide-ranging, flagrant and unchecked that it would be easy for Trump-watchers to succumb to scandal fatigue as a psychological survival strategy.

When it comes to the internecine warfare at 1600 Pennsylvania Avenue, each changing of the White House guard makes it tempting to latch on to the idea that the adults have, at last, taken charge.

Scaramucci gave a generally lauded first press conference 10 days ago, air kisses to reporters and all, but then, boom! And Kelly comes into his new role as Trump’s chief of staff as a well-regarded former general with the disciplinary skills seemingly needed to lasso the whirlwind. But as Bloomberg View columnist Albert R. Hunt has noted, “It’s doubtful that all the warring White House factions, working for a president with few core beliefs, lend themselves to a chain-of-command structure.”

Chaos and collapse can also play out over long stretches in Trumplandia. Trump ran a promising and lucrative casino business into the ground over a numbingly long period of about 25 years, extracting piles of money and perks for himself. Along the way, he left investors, vendors, employees — and Atlantic City, New Jersey — in the lurch. Trump also cycled through a long line of casino executives, managers and partners, none of whom altered his modus operandi: extraction.

So the Anthony Scaramuccis, Roger Stones, Marc Kasowitzes, Kellyanne Conways, Sean Spicers, Reince Preibuses, Corey Lewandowskis, Paul Manaforts and Stephen Millers of the world will come and go, taking turns sharing the stage with the White House’s only star, and doing their best to support his guerrilla sensibility. But they, like all Trump advisers, are interchangeable, apt to be jettisoned if they forget to put the boss first — or to kid themselves that his presidency is about anything other than extraction.

A rotating cast of advisers means that Trump will always set the tone, pace and agenda of his administration. So buckle up, America, because the president is just getting started.

My Turn, Cybil Jones: Won’t you be my neighbor?

“Families with children don’t want to relocate to areas with poor school performance.” As I read this on Monday morning... read more