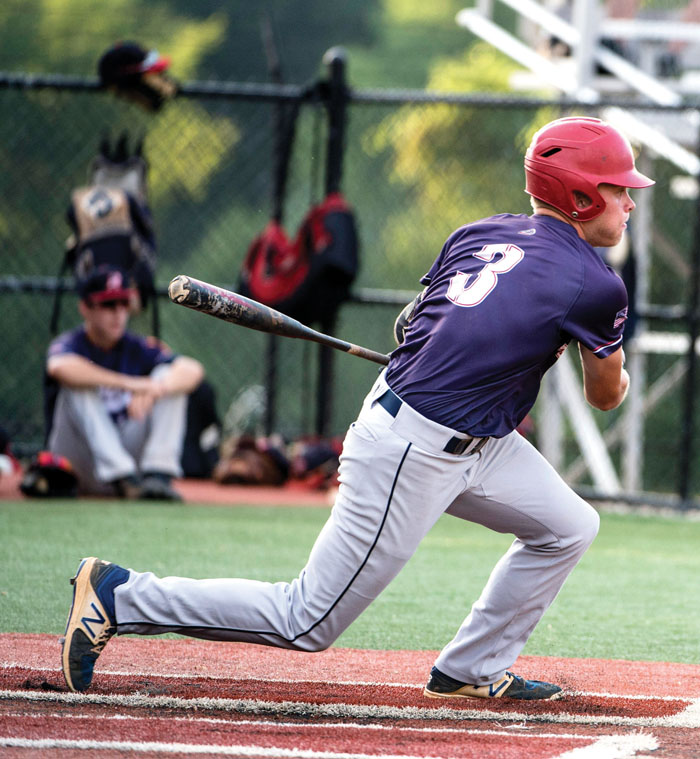 SALISBURY — Catawba College baseball coach Jim Gantt isn’t a fan of adjectives such as “old-school” and “throwback” and winces whenever he hears them.

Old-school and throwback are sports words that conjure up mental pictures of guys with dirty uniforms hustling, giving 1o0 percent of themselves, but Gantt doesn’t see hustle as something special. He sees hustle as something that should be automatic.  Running out every ground ball or sprinting to back up every throw isn’t special. It doesn’t make someone old-school or a throwback, it’s simply playing the game the right way.

Basically, Poteat plays all-out, all the time. Hitting, running, throwing, fielding, whatever. He fouled a ball off his knee late in the American Legion and sported a lump the size of an orange on his leg. He still didn’t miss any games and was still looking for brick walls to run through.

Poteat played many different sports in high school at West Rowan, where he was probably better in wrestling, track and football than he was at hitting baseballs. He was a once-a-week part-time outfielder on the 2015 Rowan  County American Legion team, and as a high school senior in the spring of 2016, Poteat managed 21 hits in 29 games for a modest .233 batting average.

As much as Gantt enjoyed watching Poteat go about his business on the field, there’s no way Gantt could’ve dreamed, not at that point, that Poteat could ever hit enough to be a factor for Catawba’s baseball program, one of the strongest in Division II.

So Poteat quietly signed with St. Andrews, an NAIA school in Laurinburg. No one outside his family gave it a second thought until Poteat’s natural athletic ability suddenly kicked in during the long summer of 2016 and he started tearing the cover off baseballs on a nightly basis for Rowan Legion. Poteat hammered fastballs and  battered breaking balls. He batted .426, scored 61 runs and stole 36 bases in 54 games. He won multiple games with his defense in right field — diving, running down balls in the alley, firing accurate throws. He was the most dynamic player on the World Series runner-up team and was named Area III Player of the Year. For a guy to go from reserve to Player of the Year in 12 months, isn’t normal, but once Poteat started focusing all his attention on baseball, he was great at it.

At St. Andrews this year, Poteat stayed hot. He batted .396 in 53 games with 37 RBIs and 14 steals. He gave the Knights his best, gave them a solid year on the field, but he was homesick the whole time.

“I came home all except two weekends,” Poteat said. “But once baseball started at St. Andrews, it wasn’t so bad.”

Homesickness is behind Poteat now. After another strong Legion summer, he’ll be at Catawba this fall, with three years of college eligibility.

“Catawba has been the dream school since I was little, Poteat said. “I always knew this is where I wanted to be, but until last summer I didn’t know it could  happen for me. It’s exciting. There are a lot of West Rowan guys on the team, plus more guys like (homeschooler) Hunter Shepherd that I grew up playing with.”

The 12-man recruiting class that Gantt announced this week is intriguing. West Rowan grads Trevor Atwood, a catcher, and Pearce Wilhelm, a pitcher/catcher, are guys everyone has known about for a while.

A new name on Gantt’s list is Henderson Lentz, a 6-foot-4, lefty-hitting outfielder. Lentz was the Central Carolina Conference Player of the Year in basketball for North Rowan and he signed with Catawba for the indoor sport, but it appears he may try to play both. At least, he’s keeping his options open. Lentz debuted in Legion ball this summer and showed speed, a good glove and a solid bat. Lentz had devoted his previous summers to travel basketball.

Catawba also has landed Jason Curtis, a former Marvin Ridge High star who was a starter at Appalachian State. Curtis hit .262 for the Mountaineers as a sophomore and will have two years of eligibility with the Indians.

Catawba also lost left fielder Bryce Fowler. That means Poteat could be be in the mix for the left field job. One of the guys he’ll be competing with will be is his former West Rowan teammate Harrison Baucom, who is making a comeback after multiple injuries.

“The SAC is going to be a step up for Lee in competition from Legion ball and from St. Andrews,” Gantt said. “But he’ll be playing with guys who have a similar mindset. He’ll make the adjustments he needs to make to play at a higher level and there are no questions about how hard Lee is going to compete.”