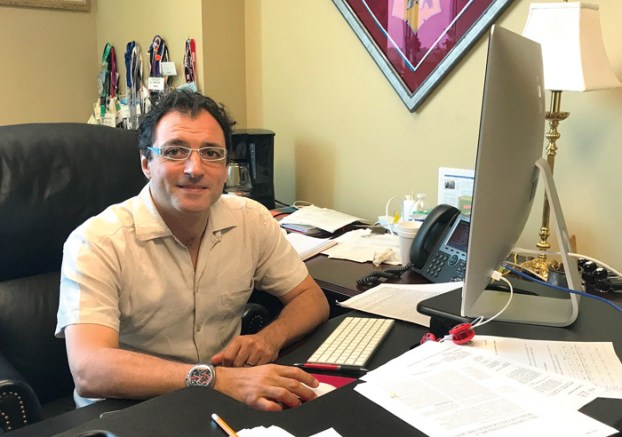 KANNAPOLIS — Giuseppe Valacchi, PhD, arrived in Kannapolis from Ferrara, Italy, in the summer of 2016. As the newest associate professor with the N.C. State Plants for Human Health Institute (PHHI) at the NC Research Campus (NCRC), he was far away from home but a step closer to achieving his goal of helping families find ways to cope with a rare neurological disorder called Rett Syndrome.

Valacchi has found that dietary interventions alleviate many symptoms of that rare genetic disorder.

Rett Syndrome (RS) is a neurodevelopmental disorder that affects the nervous system and other vital organs. One in 10,000 infants, almost all females, will be born with RS, which is caused by mutations in a specific gene called Mecp2.

Valacchi describes Mecp2 as a gene that does “everything” since it is able to turn on or turn off the gene expression of thousands of vital proteins. A mutation in Mecp2 stunts the growth of neurons, which are in the brain and spinal cord, and nerve cells, which run throughout the body, affecting the ability of cell-to-cell communication in the nervous system and other parts of the body.

Valacchi explains that RS symptoms are not visible until a child reaches 6 to 18 months of age, after she has already started to walk, talk and learn other skills. When the effects of the mutation appear, there is a visible regression, making RS a particularly devastating disease.

Valacchi began researching RS in 2009 when a colleague pointed out a connection with oxidative stress, a subject he knew well from his previous work at the University of California, Berkeley and, later, the University of Siena in Italy.

Oxidative stress is an imbalance in the body between compounds called free radicals, which damage cells and compromise their ability to respond to stress via the so-called “antioxidants defense.”

Valacchi and his team also found that during the four phases of progressive neurodegradation that occur once symptoms begin, there is a progressive increase of oxidative stress markers. “The worse the clinical picture of a child, the higher the oxidative stress level,” Valacchi explained.

With oxidative stress strongly tied to the neurological symptoms characteristic of RS, Valacchi looked to naturally occurring compounds with antioxidant properties. In a study with omega-3 fatty acids, Valacchi saw oxidative stress decrease and symptoms improve in RS patients. Valacchi found that the children in the study that consumed the omega-3 fatty acids were easier to communicate and interact with, calmer and happier.

“Dietary interventions cannot cure Rett Syndrome,” Valacchi clarified. “But they can make a huge difference to families dealing with this overwhelming disease.”

Valacchi and his team – both in Ferrara, Italy, and in North Carolina – have published many studies on RS and oxidative stress, more than almost any other group of researchers. He anticipates broadening his research base through collaborations with NCRC colleagues who also study the effect of antioxidants on human health.

The most meaningful aspect of his work, Valacchi admits, is time spent with RS children and their families. “I feel like I’m trying to do something good,” he said about the impact of his work. “If I could help these families even just a little bit, that would be great.”

About the North Carolina Research Campus

Thousands of people have responded to an emergency call for blood and platelet donations issued by the American Red Cross in... read more