David Freeze: A day of interesting sightseeing before the long drive home 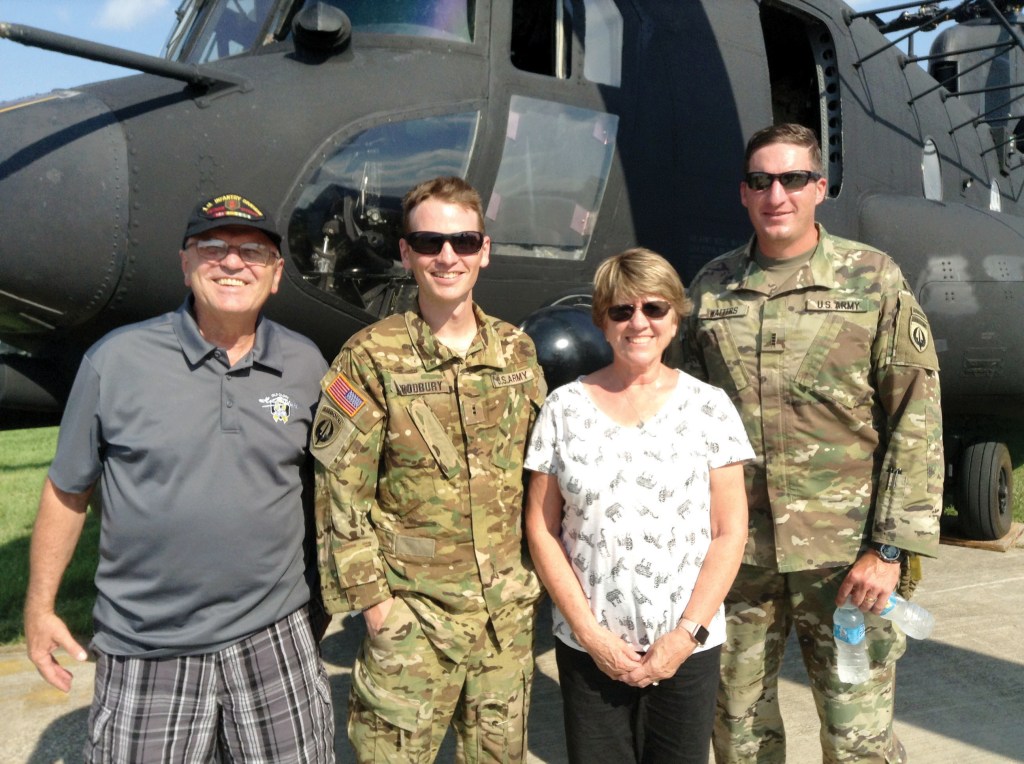 Helping to make the Green Bay visit memorable are, from left, Dave Mikulsky, CW2 Forest Woodbury, Kathy Mikulsky and CW4 Ryan Walters. The Army helicopter crew is out of Fort Campbell, Kentucky. Photo by David Freeze, for the Salisbury Post.

Editor’s note: Salisbury native David Freeze cycled from Anacortes, Washington, to Green Bay, Wisconsin. The Post has chronicled each day of his ride. Contact him at david.freeze@ctc.net.

Even though I had spent quite a bit of time for work in the Green Bay area over the years, I had never really done much sightseeing, especially north of the city. My hosts for the the last two days, Kathy and Dave Mikulsky, made sure we had a good day planned around the area today.

An interesting twist started off the day when we met Dick Franklin and Wanda Huntley, both of Salisbury, at Green Bay’s Lambeau Field. Dick had crossed paths with me often over the last few summers in his RV, and we came close to seeing each other but never quite made the connection.

This time, Dick arrived in Green Bay at the same time as I did, me for the end of my bike ride and him for the EAA Airventure Oshkosh 2017. The Airventure is a week long celebration of flying that includes private and military aircraft and is expected to attract 500,000 people and 10,000 planes. Dick brought his sister Wanda along since she is training to be a pilot.

The Mikulsky car was our chariot as we rode up into Door County, an exceptionally beautiful area bordered on both sides by water. We rode through the busy touristy towns of Egg Harbor, Fish Creek and into Sister Bay on the way to Al Johnson’s Swedish Restaurant, recommended by Dick Franklin. Two things, goats graze on the roof and the restaurant specializes in Swedish pancakes and meatball dishes. There was an hour wait, and that time was set to be longer later in the day. I had the pancakes, as you might guess.

With cherries being freshly harvested in the area, we rode just a little farther north to pick up some specialty cherry pies and a few jams and other assorted items at Seaquist Orchards Farm Market. These cherry pies were heavy enough to do a good wrist curl workout. I picked up a few gifts for home. The whole area reminded me often of the New England coastal areas with small bays and cool towns.

We brought Dick and Wanda back to Lambeau Field so that they could return to Oshkosh and their RV. Then Dave, Kathy and I went out to see if we could get in to look at the historic planes that had already arrived at Oshkosh.

Dave is a U.S. Army Vietnam War veteran who recently received an honor flight. He wore his commemorative shirt and cap, and we got quick access to walk around the grounds, still a day and a half ahead of the official opening of the Airventure on Monday.

Two big highlights were seeing the Chinook Army helicopter and Air Force B-52 bomber and meeting their crews. Dave had witnessed the work of earlier models of both of these aircraft in Vietnam. Especially interesting was our talk with Army Chief Warrant Officer 2 Forrest Woodbury.

Dave, Kathy and I walked nearly 10,000 steps over three hours as we checked out other warbird planes and lots of interesting things being set up for the massive celebration. We are now on the way back to their house for an evening’s rest before I head out out early on my one-day, nearly 1,000-mile drive home, just me and the bike.

Thanks again to all my sponsors for this special journey: Father and Son Produce, First Baptist Church of China Grove Men on Mission, Gentle Dental and Dr. Tanya Williams, Skinny Wheels Bicycle Shop, Gear for Races, Vac and Dash, Leonard Wood and Accelerate Therapy and Performance and Dr. Delaine Fowler.

And, of course, the Salisbury Post which brings the whole thing together. Elizabeth Cook, Andy Mooney and Bobby Parker kept in contact and posted the daily reports and photos, giving me a little extra time when needed. It was a pleasure to work with these three professionals again.

Put the welcome home reception on your calendar for Wednesday, Aug. 2, from 5 to 6:30 p.m. This time we are booked at the Rowan Public Library Main Branch, in the Stanback Auditorium. Join the Salisbury Post and me for a presentation about this just concluded ride and plenty of time for individual questions and conversations.

My final thoughts on this adventure will be posted in Tuesday’s paper.

With tremendous gratitude, I want to once again express my heartfelt thanks for our readers following another magical event. See you back here for final thoughts on Tuesday.