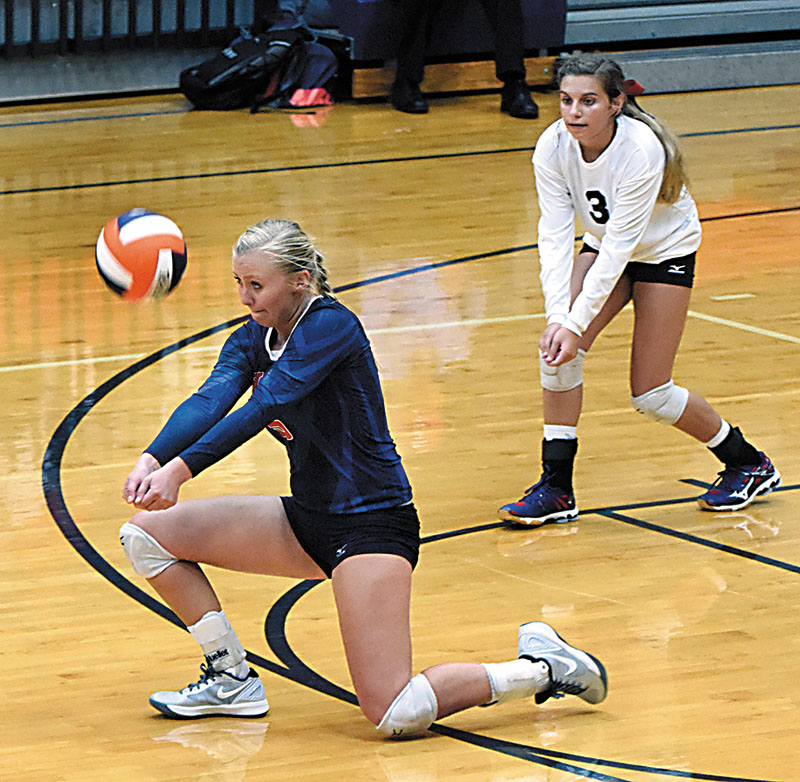 East Rowan’s Jordan McCall sets up during a match against Carson on Aug. 25, 2016. McCall will play volleyball for Catawba. Photo by Wayne Hinshaw, for the Salisbury Post.

SALISBURY — All-county for the past three seasons and a strong student, East Rowan’s 5-foot-8 setter Jordan McCall had quite a few options as far as playing college volleyball.

A lot of precise McCall assists were turned into Mustang points by Brittany Small, Avery Wright and other East hitters over the years.

“Jordan is quick to the ball, has great hands, makes really good decisions on the court,” said Sandy Basinger, who coached McCall for two seasons at East. “She’ll be a fine college player.”

Jordan looked at a lot of schools before announcing a commitment back in January to Columbus State University, a Division II Peach Belt Conference school in Georgia.

Like every athlete who gets that decision out of the way, Jordan was relieved and happy. But her world was shaken a few months later.

Lee McCall, Jordan’s mother, is a fourth-grade teacher at Salisbury Academy. Salisbury Academy was involved in a lockdown drill when she got a call from Columbus State. Lee had to whisper and said she couldn’t talk, but she could tell the person on the other end of the line was crying.

The McCalls would learn later that day that Columbus State, faced with tough budget decisions, had elected to discontinue its volleyball program. The school had to either take something away from a lot of programs or terminate one completely. Volleyball got the axe.

“Jordan was devastated,” said Jordan’s father, Barry McCall, who was a fine athlete at East Rowan in the late 1980s.

“It really was heartbreaking,” Jordan said. “It was a hard thing. I started playing volleyball in fourth grade and I loved it, and then I started playing travel ball in sixth grade, and it became a huge part of my life. Then when Columbus State dropped the sport, I didn’t know what I was going to do next.”

More offers came in when schools heard the news. Jordan made a visit to Greenwood, S.C., to take a look at Lander University. But that visit probably came too soon. In her heart, Jordan wasn’t ready to move on yet.

“The weeks went by and I’d pretty much decided to just go to Western Carolina as a regular student and try to play club volleyball,” Jordan said.

But then Catawba’s long-time coach Ginger Hamric called. Catawba was one of the schools Jordan had looked at early in the recruiting process. Catawba still wanted her.

Hamric has a good feel for who can and can’t play college volleyball. She’s coached Catawba volleyball since 1990 and is a four-time South Atlantic Conference Coach of the Year. Catawba was 16-13 last fall and 13-9 in the SAC.

“The timing when Coach Hamric called was actually pretty great,” Jordan said. “Now I’m very excited about getting this chance. It’s going to be fun going to school and playing so close to my family and friends.”

Jordan winding up at Catawba also was a positive for her family. Now they’ll get to see her games. Columbus State is almost 400 miles away. The only Peach Belt school in North Carolina is UNC Pembroke, and UNCP is still more than two hours from Salisbury.

Lee McCall might be the most excited about her daughter’s new college destination. Lee was on the Catawba soccer team and is a Catawba graduate.

A celebration was held for Jordan, who is “JuJu” to her friends, on Saturday at Forest Glen. Teammates and coaches who have helped her along the way gathered to honor her.

“She has a great attitude at every practice and every game,” said West Davidson coach Mike Green, who coached Jordan in travel volleyball. “She’s a team player and she always keeps her head in the game.”