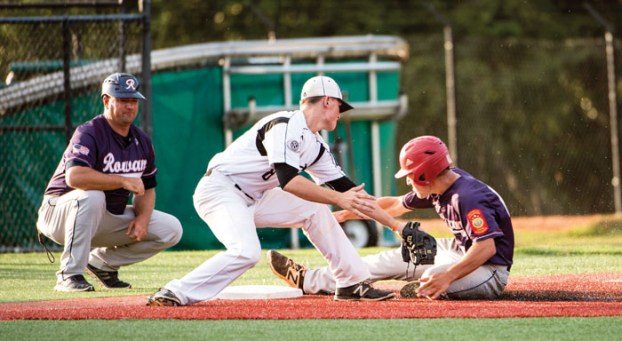 ASHEBORO — Rowan County sent 53 batters to the plate, pounded 22 hits and scored 15 runs on Sunday night in a game that lasted more than 3 1/2 hours.

Somehow, Rowan still lost to Randolph County at McCrary Park, 16-15. Rowan squandered an early 8-1 lead and then frittered away a late 11-5 advantage.

“It was unbelievable and it was crazy,” Rowan coach Jim Gantt said.

Randolph’s eight-run eighth inning proved decisive. It went on and on and on against three Rowan relievers. When the smoke cleared, Rowan (31-2) trailed 16-11, and even a four-run top of the ninth wasn’t enough. Tanner File, who already had produced four hits, grounded out to end the game with the tying run at third.

“Heck, if we can just hold them to seven runs in that eighth inning, we tie it,” Gantt said. “But they got eight.”

Rowan got four hits each from Chandler Blackwelder and File. Brandon Walton had three hits and three walks on his six trips to the plate. Chandler Lippard knocked in four runs.

But Cameron Morrison, the Randolph catcher who plays for Gantt at Catawba College, had two huge hits — the two-out, two-run, seventh-inning double that gave Randolph hope, and the two-run double in the eighth that broke an 11-all tie. He also singled in a run in the first inning.

A lot of good things could’ve happened for Rowan on Sunday, namely Gantt’s 500th win in 17 summers at the helm and the program’s 19th Area III championship. Instead, Rowan had a 13-game winning streak stopped and will have to tee it up against Randolph again tonight at Newman Park at 7 p.m. This will be the decisive game in a best-of-three series. Then both teams will head to the state tournament in Greenville. As tournament host, Randolph also is assured of a spot in the Southeast Regional.

Lefty Hayden Setzer will be on the mound for Rowan tonight. The bullpen will be short-handed, as Griffin Myers and Joe Harrison won’t be available. They’ve pitched the last two days.

“You can use your guys and try everything you can to win a ballgame or you can save them,” Gantt said. “We tried to win tonight.”

Everything went fine for Rowan early. Five straight Rowan hitters reached base in a six-run second inning that gave Rowan a 6-1 lead. Lippard had a two-run single, before File, Brycen Holshouser, Henderson Lentz and Lee Poteat drove in a run each.

When Rowan expanded its lead to 8-1 in the third on RBIs by File and Holshouser, the path to victory seemed clear of obstacles, but then Rowan starter Olen Stamper was knocked out in the fourth. Stamper got a lot of hard-hit outs in the air early on, but several walks and Bryce Marsh’s three-double in the fourth changed the game.

Rowan would use seven pitchers, with Brandon White, Brett Graham, Harrison, Myers, Pearce Wilhelm and Noah Gonzalez following Stamper to the hill. All seven gave up at least one run.

John Owen’s two-run single in the sixth gave Rowan a 10-5 lead. Rowan lost a run when Walton was deemed to have left third base early on what would’ve been a sacrifice fly for Trevor Atwood, but Blackwelder’s two-out double gave Rowan an 11-5 lead in the top of the seventh.

It was still 11-5 with two outs in the bottom of the seventh, but Harrison issued a bases-loaded walk before Morrison’s first double sliced the Rowan lead to 11-8.

Gantt put Myers on the mound to start the eighth, but he got only one out while allowing three hits and hitting a batter. With the lead reduced to 11-9, Wilhelm got the call. A bases-loaded walk and Dawson Painter’s run-scoring single made it 11-all. Then Morrison’s second double put Randolph (27-8) on top to stay.

Gonzalez got the ball next. He finally got Rowan out of the disastrous eighth, but not before Post 45, which produced 19 hits, did more damage. Randolph’s lead swelled to 16-11.

Rowan’s last gasp in the top of the ninth wasn’t quite enough. With one out, Blackwelder and Lentz produced hits. Poteat’s bouncer led to the second out, but it did get Blackwelder home. Walton kept Rowan alive with a run-scoring single against Williams, the winning pitcher, making it 16-13. After Owen was hit by a pitch, Atwood singled to load the bases. With Rowan down to its last strike, Lippard lashed a two-run single to cut the deficit to 16-15. With pinch-runner Will Brown at third, File grounded out against Trevor Marsh, Randolph’s seventh hurler, to end the game.

Officially, Rowan made no errors, but Gantt said it was not a good defensive night.

“There were a lot of times guys didn’t know where their teammates were playing and we threw the ball to the wrong base several times,” Gantt said. “It was all stuff we just practiced.”